My Christian friends, if you want to make spiritual progress- as I’m sure you do- then I recommend that you embrace prayer and read the lives of the saints and the teachings of the Fathers of our Church. In these you’ll see the magnificence of our Orthodox faith and also how we are to live it on an everyday basis. One great Father of our Church, who, for a long time was hardly known at all because preachers never mentioned him in their sermons and catechisms, was Saint Gregory Palamas, Archbishop of Thessaloniki. I’ll just say a few words about him here and you, who have a thirst for knowledge, can investigate further. 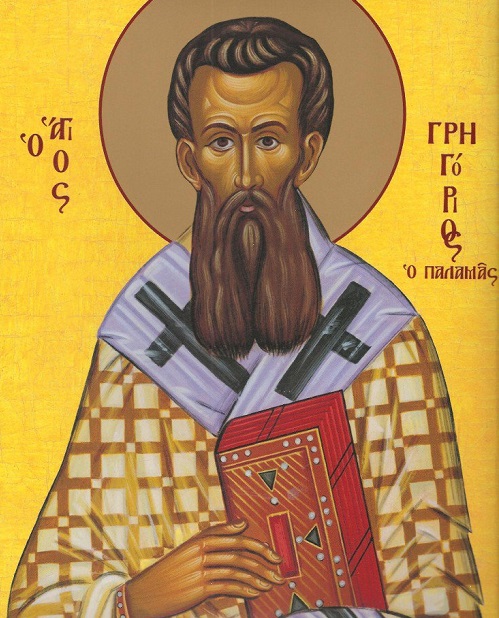 Saint Gregory Palamas, my beloved friends, was born to devout parents who lived as though they were monastics. At a very early age he learned deep devotion to God, though he also had an extremely well-founded education in the humanities. He chose to become a monk, however, and to devote himself to God, Who prepared him to enter deeply into the spiritual concepts of our faith and of sanctity. God prepared him to be someone who saw Him. Gregory left for the Holy Mountain where, under the direction of saintly and experienced Elders, he began the struggle to cleanse his soul from the passions. The prayer he said often was ‘Lord Jesus Christ, lighten my darkness’. He particularly sought the aid of Our Most Holy Lady the Mother of God in the purification of his soul because he’d loved and been devoted to her from childhood. What was also wonderful about the young monk Gregory is that, apart from prayer and the ascetic life, he also studied the teaching of the holy Fathers in depth. This is also the way in which his small brotherhood, which came to him later, wished to live. Indeed, Saint Gregory considered the time spent on preparing their frugal meals to be a distraction from their spiritual progress, so has asked Our Lady to undertake the task of feeding them. And so she did. Every day, the Most Holy Mother of God sent some faithful Christian to bring food to the holy brotherhood of Saint Gregory.

Through such a holy way of life he cleansed his soul of its sinful passions and became a vessel of the Grace of God. He increased greatly in sanctity. Everything he did had to do with God and, in particular, his discourse was theological. He was like a glass bowl overflowing with milk, as he himself saw in a vision. This was his divine teaching which he received as a message from an angel and passed on to the faithful.

My friends, with the gifts He gave Saint Gregory, God prepared him to fight against a great heresy which appeared at that time, that of Barlaamism. I shall say only a few words regarding it. Barlaam came to Byzantium from the West and brought a different God with him. Instead of seeing God as a loving Father, very close to our pain and weakness, he conceived Him as being only ESSENCE. In other words, he believed in a dread and terrible God, seated on high and blasting out thunder and lightning. A God Who could have no relationship with things human, because, in reality, God’s Essence couldn’t communicate with earthly creatures. But we Orthodox feel God to be very close to us. We feel Him beside us and within us. In fact, we say that our goal is to be united with God, and we call this union DEIFICATION. We Orthodox have this teaching because we believe that our God isn’t only ESSENCE, but also ENERGIES. Through His divine Energies, He made the world and through His divine Energies we, too, can taste the Glory of God and be deified.

Of course, since God is uncreated, so are His divine Energies. In other words, they aren’t made by us, but come directly from the uncreated God. Barlaam didn’t accept the divine Energies and so didn’t agree that we can become holy and be deified. In this way, he denied the purpose for which we were made. My friends, we weren’t made simply to become good people, but to find God and to be united with Him. And it’s possible for this to happen because God has uncreated Energies, not only Essence, as Barlaam maintained.