Our subject is ‘The Holy Memorial Services’, that is the supplications made by the Church on behalf of our departed brothers and sisters. Initially, we shall attempt to give a historical view of the subject, that is, a review of the tradition and practice of the Church regarding the services, from the beginning until they became established liturgical order. The reference to tradition in relation to our subject here, and in the case of all matters of worship, is not merely the result of historical curiosity but, rather, there is an important reason for pursuing it. It is in this way that we safeguard the legitimacy of our liturgical practice- in this case intercessions made by the Church for the departed: for the repose of their souls and the consolation of the living. 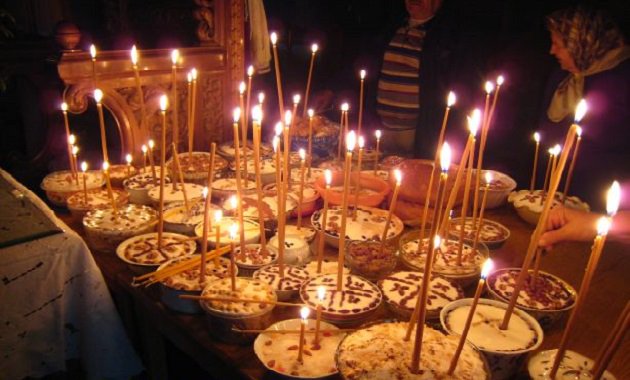 This is how a traditional Church, such as the Orthodox, thinks, theologizes and acts. Tradition validates and verifies our modern practice. We do not innovate, but follow the order we inherited from the Lord, Jesus Christ, the holy Apostles and the Fathers of the Church. We cling to this with humility and confidence, and in its name we continue our spiritual and liturgical life within the bosom of the Church, invoking God’s mercy and believing that His loving-kindness will exceed the multitude of our sins.

We say this boldly at the kneeling prayers at Pentecost, which are essentially funereal: ‘Measure out Your mercies against our transgressions; contrast the depths of Your pity to the multitude of our offenses’ (first prayer). To questions from believers and non-believers regarding the benefits to the departed of prayers made on their behalf by the living, since ‘there is no repentance in hell’, we shall invoke the age-old practice of the Church.

The seemingly simplistic ‘That’s the way we received it’ demonstrates all our trust and our unshakeable and lively hope in the mercy of God. It also indicates the certainty that the practice of the Church, which expresses its faith and the truth of its revelation of God in Jesus Christ in the world, is a guarantee for all of us that our prayers are in accordance with God’s will and that they will be of benefit for the souls of the deceased. How this will happen we leave to the vast ocean of God’s ingenious love.

This would roughly be our answer regarding the memorial services from a liturgical point of view would roughly be this: that the matter is dealt with on the basis of the teaching of the Church concerning the last days, life after death, the resurrection and the communion of the saints. This has been analyzed at length in theoretical discussions.

We shall dwell here on the historico-liturgical aspect only.

From the very outset, the Christian Church established special prayers for the repose of the souls of our departed ancestors and relatives. This was the result of its belief, and teaching, that the faithful departed are still alive in Christ after death and that the communion of faith and love among the living and the departed continues to exist and is expressed in mutual prayer. The living pray for the departed; the departed, especially the saints who have boldness before God, pray for the living. And so prayers and services were established in memory of the departed, the memorial services. In this way, the Church continues the human practice and tradition of the funeral customs which existed at the time of Christ and the foundation and expansion of the Church. These customs were adapted to Christianity and, purified of superstitions and popular lore, took on new content and meaning and continue to do so.

In the Old Testament, there is evidence of the Jewish practice before the time of Christ. In Tobit, 4, 17, there’s an exhortation to ‘pour out your loaves on the grave of the righteous’, which may be a reference to the banquets of the dead at the grave or the distribution of alms to the poor, obviously in memory of the departed. In 2 Maccabees 12, 43-45, mention is made of a ceremony of sacrifices ‘for sins’ on behalf of the ‘devout departed’. Judas Maccabaeus sent what was required to the temple in Jerusalem to have a sacrifice performed for those who had fallen in battle. The relationship to the later Christian practice is clear.

Sacrifices and offerings on behalf of the dead were also made by idolaters. From as long ago as the time of Homer, the ‘wake’ was common, at which it was believed that the departed ate together with those present. These funeral banquets were celebrated on fixed days from the date of birth: the third, ninth, thirtieth and yearly anniversary of the birth, i.e. the ‘birthday’, of the deceased not of his or her death. The similarity to the Christian practice is obvious here, too.

As was to be expected, Christians continued the above practices in two ways: with alms given on behalf of the departed (as an expression of love, both towards them and to the needy) and with prayers. From as early as the atthe end of the 4th century, the ‘Apostolic Constitutions’ recommend that some of ‘the property of the deceased’ be given in their memory, as alms to the poor (VIII, 2). Chrysostom, Hieronymus, Tertullian, Pseudo-Athanasios and other early Fathers and ecclesiastical writers also make the same suggestion. At the same time, ‘wakes’ were also celebrated at the graveside and these have survived in a variety of local forms to this day. These ‘wakes’ were also related to the practice of alms-giving, since itwas not only the family and friends of the deceased, but also clergy, the poor and strangers (Apostolic Constitutions, St. Augustine’s Confessions, I, 2, Valsamon and so on). It is worth noting the spiritual significance given in the Apostolic Constitutions to these common meals, as a practice of prayer and intercession by the living on behalf of the departed (‘When you are invited to their memorials, feast with good order and the fear of God, being able to intercede for those that are departed’ 8, 44)…

The important thing is that the Church retained pre-Christian customs which were not contrary to its teaching, gave them a new, Christian meaning and altered some of the theological terms. Thus, it moved the [ancient Greek] thirty-day memorial to the [Mosaic] fortieth day, clearly under Jewish influence and by analogy with the Lord’s Ascension. Similarly, the annual memorial is celebrated not on the date of our physical birth, but on the day of our birth in Christ, our perfection and our entry into true life, that is the day of the ‘dormition’ of the faithful, our birthday. The Church does not engage in pointless and futile polemics and shadow-boxing [with former customs], but reshapes the world in accordance with Christ’s will. A very wise tactic.