Let us, then, have a look at this mystery and understand it from a single appearance of Christ after His resurrection: to two of His disciples who were on the road to Emmaus, a small town some 10 miles from Jerusalem. This appearance is related only by Luke and is one of the most beautiful and vivid scenes in his Gospel.

From the narrative, it seems that the two disciples, Cleopas (one of the seventy) and, perhaps, Luke, were profoundly sad and devastated by the events of the previous few days, that is the conviction, crucifixion and death of their Teacher on Whom they’d pinned their hopes concerning the Messiah. These expectations had been completely dashed. Despite their sorrow, their love for Jesus was undiminished in their pure and sincere hearts. This is clear from the content of their discussion, which was about Him. They were hard pressed to understand how everything had gone awry and how, in such a short time, all their hopes had perished, along with their beloved Teacher. 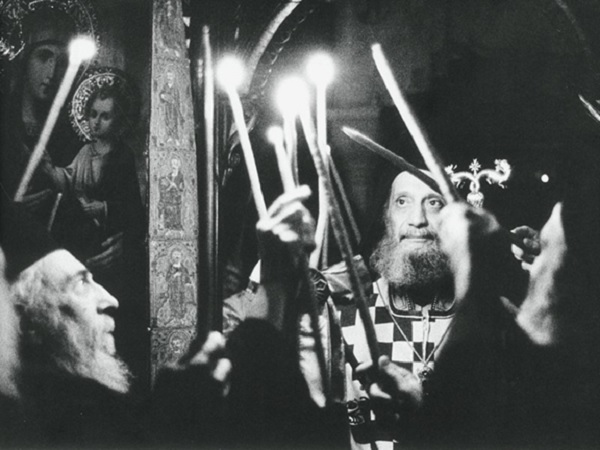 But then, suddenly and unexpectedly, Jesus appeared to them again, as an unfamiliar fellow-traveller who approached them while they were talking. Saint Mark says in his Gospel merely that He appeared in another form. Saint Luke tells us that their eyes were prevented from recognizing Him. In these verses, a great and important mystery is concealed. From now one, the relationship between Jesus and His disciples, as well as with believers throughout the ages, would be different. The Lord no longer wished to be known by His human form, but through faith and experience. Nowhere, in any of the Gospels, is there a reference to Christ’s external appearance. It’s only through Church tradition that we have some slight idea and can depict Him. This may, indeed, be the reason why the holy Evangelists didn’t provide us with any such information: in order to initiate us into the same mystery.

Jesus approached the disciples and asked what they were discussing and why they were so downcast. He feigned ignorance so that they could disclose their discussion on their own terms. In this way, He wanted to take the opportunity to talk to them and make them understand, through the prophecies of the Old Testament, that the Messiah was destined to suffer and that he had to ‘suffer these things and enter into his glory’ [Luke 24, 26]. But as the Lord spoke to them and interpreted the Scriptures for them, the hearts of the two disciples were aflame with divine fire and a sweet consolation and peace came upon them. The form of the Person of Christ was different but the effect of His words of grace and His presence was the same and was familiar. The two disciples were astonished at this sudden and unexpected internal change in the feelings of their hearts. They didn’t want to be separated from this as yet unfamiliar fellow-traveller, so when He pretended that He was going to continue on His way, because they were so close to Emmaus, the disciples urged him strongly to stay, in words that are very profound in meaning: ‘Stay with us, for it is nearly evening; the day is almost over’. So, extremely courteous as always, He went in to stay with them.