Great Week – the Conclusion of the Search for Adam

‘You came down to earth to save Adam, and not finding him on earth, Lord, You descended into Hades to seek him’. This verse, from the Lamentations on Great Saturday, states, in a very concise yet apt manner, the plan of Divine Providence for the salvation of humankind, in the persons of Adam and Eve.

The second person of the Holy Trinity, that is the Son and Word of God became a perfect human being in order to save us. He came down from heaven into the womb of the Virgin Mary, so that He could become the same as us and in order to call us to our heavenly home. In this verse, the hymnographer refers to the aim of God’s descent to the earth: the purpose of the incarnation of the Son is the fulfilment of the promise to our first ancestors that the Son and Word of God would crush the head of the serpent and bring Adam and Eve back into the bliss of Paradise, that is into direct communication with God. 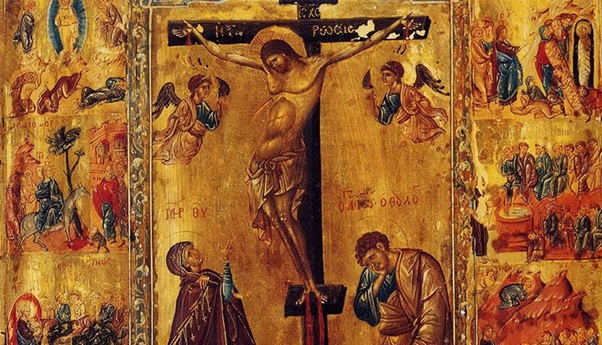 The fulfilment of the promise is effected at the feast of the Annunciation, when the angel Gabriel announced to the Virgin Mary that she would bear a Son and call Him Emmanuel. The Mother of God consented to bear the Creator, and God became a human person so that we, by grace, might become God. Christ, as God and human person, was born and came into our history with the aim of seeking and finding Adam, that is the first among us, who, by disobeying the command of the Creator brought death and corruption into our lives. The search for Adam on earth went through a variety of stages: the Theophany at the River Jordan, the call of the disciples, the miracles, the teaching (in the Temple, in the synagogue in the open air), the transfiguration on Mount Tabor shortly before the Passion, culminating with the raising of Lazarus, which we’ve just celebrated, as a portent of the Lord’s Resurrection.

During the course of Christ’s earthly life, the search for Adam (according to the hymnographer) was seemingly fruitless. Our Lord, Jesus Christ, raised the four-day dead Lazarus in order to warn Hell quite clearly that He was coming to destroy its atrocious authority over us, as Saint Andrew of Crete puts it. The progress of the Son of Man towards His voluntary Passion and the much-desired meeting with the ‘first Adam’ is a recapitulation of what was revealed to us during His teaching activity. Consequently, the Church has determined the order of the ‘reminders’ during Great Week. These are arranged in such a way that everything is either a forerunner or an imitation of Our Saviour. Lazarus Saturday and Palm Sunday present a common feature, which is that of victory and triumph. With His raising of Lazarus, the Creator revealed that our greatest enemy, Death, is not invincible. Palm Sunday acts as a prelude of the triumph of Life over death and is, at the same time, the acceptance by the people that Jesus Christ is, beyond doubt, the only Lord and King.