The crows
One time, when the same monk was busy elsewhere, a couple of crows came and ate all his pulses and everything else he had to eat. When the monk returned and saw the damage to his foodstuffs, he began, in his simplicity, to chide the saint, saying: ‘Since I’m being attacked by crows and you’re not protecting me, which other person are you, in fact, protecting and what am I doing staying here for you?’. When he’d finished he went off to do something else, and the crows came back, as usual, to eat. But they immediately went blind and were unable to leave. When the Elder returned and saw the wretched condition of the birds, flapping about aimlessly and unable to see or fly, he was sick at heart. He picked them up and took them to the saint and said: ‘Thank you, saint of God, for your swift intervention. I fall down before you again and beg you to hear your servant. If you’re moved, forgive the birds and give them back their sight, so that they can fly, as before. It’s easy and more normal for you to heal rather than punish’. After he’d said this, he took some oil from the saint’s lamp and rubbed it on the eyes of the birds, which were then able to see as before. In confirmation of the miracle, they stayed with him till the end of their lives. They went to find their food elsewhere, but then came back again, to the glory of God and his servant. 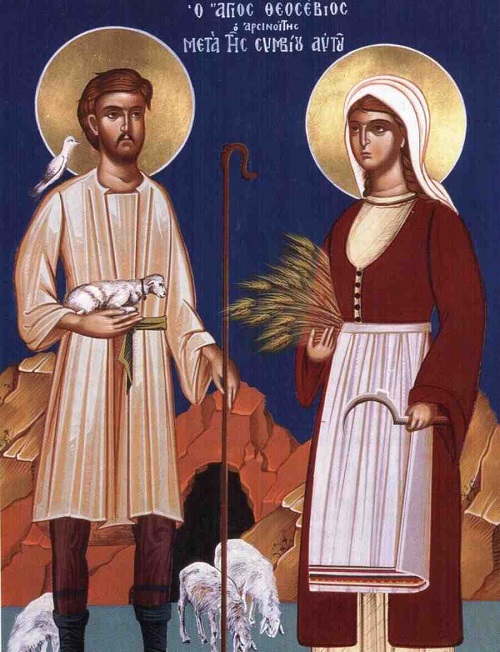 The key and the man whose eye hurt
When this Elder fell asleep in the Lord, the place remained empty, except for the crows, which continued to live there. One day, a man with a sore right eye came from Paphos. He found the church locked, so he couldn’t go in, reverence the saint and ask him to heal the pain in his eye. He was saddened and began to fret. Then the crows came and found a way to indicate where the key was hidden. When he had it, he opened the church, went in, paid his respects and begged the saint to heal his eye. When the cure had been effected, he left, glorifying God and the swift and abundant grace of Saint Theosevios which allowed him to cure pain in the eyes and other bodily afflictions of those who came to him daily.