The blind monk
There was a blind monk in Cyprus who, when he heard that the saint had the grace of healing those with impaired vision, came to him and begged him for a cure. He promised: ‘If you have mercy on me, saint of God, and give me my sight, I’ll stay here and serve your holy church till the end of my days’. Having promised this and entreated the saint with a heart full of pain, he was cure by a visitation of the saint and saw very clearly. He remained with the saint for a certain length of time, but, because of demonic action, he fell into the sin of sloth. He forgot his promises, left the place and the saint and went to Mavrovounia where he lived at the church of the holy and glorious Great Martyr Saint George. Saint Theosevios appeared to the monk in a vision and said to him: ‘Why did you come here rather than honour the promises you made to me? Didn’t I heal your eyes? Didn’t I give you your sight with the grace that resides in me? Now look what you’ve done to yourself’. On hearing this, he awoke and found that he was as blind as he’d been previously. Using another person as a guide, he went back to the saint and to his promises, repenting and confessing his disregard and blaming himself for his sin. He entreated the saint and, a few day later, again was given back his sight. This time he remained there to the end of his days, as he’d promised earlier. 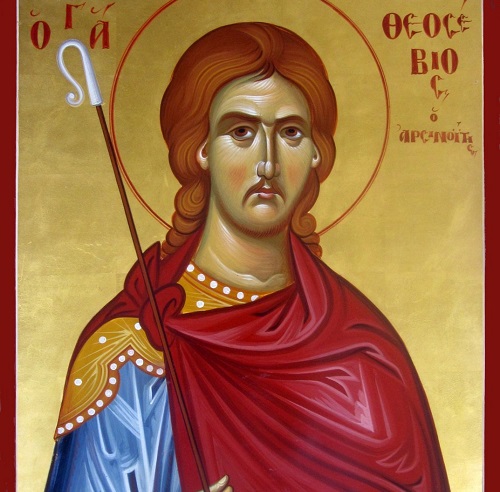 The thieves
These and many other miracles were performed by the saint, some of them a long time ago and others more recently. In our own time, there was a certain monk called Loukas, who came with great faith and looked after the saint’s church. Then Satan incited two herdsmen from the Akama region who came and stole everything they found belonging to the monk and the saint and returned to their own place.

Three weeks later, thanks to the grace which resided in Saint Theosevios, they came back, with eyes as white as snow. They fell down before the saint and asked for forgiveness and mercy, though they didn’t confess to the theft, which was the cause of the blindness and eye pain they were suffering. There they remained making foolish prayers in vain. Since they weren’t cured, and because the pain was increasing and becoming sharper, one of them said to the other: ‘Brother, you can tell that the condition of our eyes is becoming worse. It’s obvious that there’s no mercy for us and no hope of a cure unless we confess our sin and return what we stole’. Instead of accepting this good advice, however, the latter accused him of being naïve and impatient, telling him: ‘Whatever we do, let’s not confess or even say that we’re thieves, at all’. No sooner had he said that than he ‘saw’ someone with a sharp instrument stabbing him in the eyes, making his torture that much worse. He began to shout very loudly and said: ‘It was us, saint of God, who stole those things and we’ll bring them back. Just have mercy on us and free us from this torture’. So, after they’d wept, confessed and promised to return the stolen goods, one of them, the one who’d given the good advice, was cured completely, the other less so. This was so that, by not seeing well and being restrained and punished (‘with bridle and bit’ as the psalm says), he’d give up his wicked ways.

When holy Theosevios had departed this life, which resembles a shadow, he passed into the life without sorrows in a wonderful way and with great reverence for God. He now rejoices in an incomparable manner, illumined and comforted by the Sun of Righteousness. He left his irrational flock and was freed of bodily labours. He gladly joined in the divine flock of Christ and the enjoyment of the good things. As a most pure lamb of the good Shepherd, he abandoned ‘the left’ and inherited ‘the right’ (in accordance with the parable of the judgement), since, as holy and God-fearing, he was given a place on the right of God and deemed worthy to hear His voice, inviting him to join those sharing in the ‘kingdom of heaven’, in the eternal, indescribable bridal-chambers, the eternal tabernacles, the delights of paradise, in glory, delectation and life everlasting.

May we all- writers, readers, listeners and all who keep his memory- hear this voice, Christ our King, and may we enter into and enjoy the good things of which we’ve been told, through the prayers and intercessions of Saint Theosevios and those who are participating with him. May we all rejoice with Your Father and Holy Spirit, glorifying Your holy name, now and unto the everlasting ages. Amen.