The Denarius of the Joy of the Resurrection (2)

‘Come, let us work in the mystical vineyard, producing the fruits of repentance therein. Let us not labour only for food and drink, but let us also achieve the virtues through prayer and fasting. These are pleasing to the Lord of the task and He will give us the denarius through which souls are redeemed and the debt of sin is paid, for He alone is full of mercy’.

If we read the parable carefully (Matth. 20, 1-16), we’ll see that the greater danger is for the workers who began their labours earlier. He warns them that, often, ‘the first shall be last’ (v. 16), precisely because they think that their struggles bring a reward. But no. It’s not abstention from food, it’s not unbroken attendance at services, it’s not the spiritual and spiritual reflections of these days that ‘force’ the Lord to reward them. Only one fruit is demanded of us: repentance. And it appears that this can be acquired quickly and at any moment. What does today’s hymn encourage us to do? To bring our powers to bear on our struggle for the acquisition of the virtues, not on the superficial abstention from food and drink. ‘Let us not labour only for food and drink’. 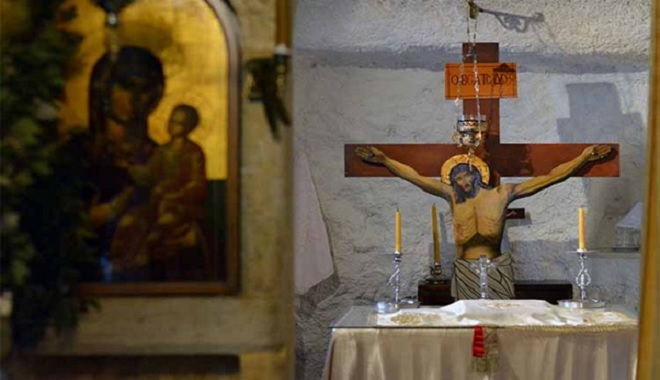 In other words, the message is clear: abstention from material things is of secondary importance and is a means, not an end in itself. In the Lord’s mystical vineyard, what matters is abstention from the passions that torment the soul and the acquisition of the virtues which revitalize it and direct it towards what is immortal and eternal. This is what the Lord seeks and what He rewards. Sin as mentioned in the Doxastiko doesn’t consist of eating a lot of different things, but rather that we’ve turned to them expecting them to satisfy our soul. Sin is the failure to direct the powers of our existence towards the struggle for those things which don’t wear away and are never exhausted. This is where we’ve failed. Any debt incurred has nothing to do with God. He loves us just the same in any case, unconditionally. The debt is to our self, which we’ve deprived of what’s essential and have, instead, wallowed in what’s inessential.

And it’s worth delving somewhat deeper into the significance of the Vineyard.

‘I am the vine and you are the branches’ (Jn. 15, 5). What’s actually behind this saying and how is it linked to this hymn? As Metropolitan Nikolaos of Mesogaia and Lavreotiki says, following the Tradition of our Church, the vine is the whole of the Church, which is the very Body of Christ, extending throughout history (https://proseuxi.gr/i-agia-ekklisia-einai-ampelos/. In Greek). The Church is His Body and so it follows that anything we do which conforms to His commandments enhances not only our own soul but also His Body, the whole of the Church, offering it as an astounding ark of salvation for the whole of the human race.

You may well be thinking that these theological discursions are rather general and that they depart from the specific message of the days of Great Lent. But I would say that I think that every spiritual struggle which transcends the narrow context of a personal effort and is incorporated into a more general sense of purpose, which is transformed into an ecclesiastical event, fills the soul with greater intent, greater zeal, greater conscientiousness and a greater sense of nobility. When the Lord called us branches of the one vine, He also made us aware of our responsibilities, by making us feel that we’re members of a single Body (cf. I Corinthians 12, 12-31, Saint Paul’s wonderful teaching on the Church as a Body). Inertia, sloth and indolence weigh heavily on the whole of our body, whereas the virtues we acquire bring health and well-being to the whole Body. How wonderful, and how encouraging, to feel that every one of our efforts impinges on all our brothers and sisters and, by extension, on the whole world. What magnificence lies behind our every effort, great or small, when our motive isn’t some individual sense of security, but has a general human perspective. And how much humility we’d acquire if, at every moment, we accompanied our efforts with the words of our Redeemer that, without Him, we can do nothing.

So this is where the significance of the ‘Come’ in today’s Doxastiko lies: labouring in the mystical vineyard of our soul and also in the mystical vineyard of our Church, with no trace of self-admiration or expectancy of reward. The day is passing and the darkness of Golgotha approaches. Perhaps everything seems pointless there, as it appeared to be to the disciples. But no. We shan’t be deprived of the denarius, we’ll find it next to the face-cloth in the empty tomb.

The joy of the Resurrection will take the place of the throes of being crucified together with Christ and will more than compensate for all the deficiencies of our body and soul.