On the morning of 9 May 2019, Archimandrite Elder Aimilianos, former Abbot of the Holy Monastery of Simonos Petras on the Holy Mountain fell asleep in the Lord at the Holy Convent of the Annunciation of the Mother of God, Ormylia, Halkidiki.

You have made known to me the ways of life; you will fill me with joy with your countenance (Ps. 15, 11)

Abbot of the Great Meteora and multi-faceted activity in the Metropolis of Trikka
At the end of 1961, the Metropolitan of Trikka, who shared Fr. Aimilianos’ desire for the monastic life, called him back from Dousiko and made him Abbot of the Holy Monastery of the Transfiguration at the Great Meteora. Initially he was there alone, but, despite his always fragile health, he found strength in high-minded fortitude and the tireless pursuit of the ascetic, mystical and sacramental life. He kept vigils, prayed unceasingly and devoted himself to the most painstaking and lengthy study of Patristic, ascetic and ecclesiastical works. With an insatiable appetite, he sought, found and studied every text dealing with the organization and functioning of Orthodox monasticism, particularly the coenobitic form [common life in a monastery], delving into the monastic institutions of the Eastern Orthodox Church and the Rules of prominent ancient monasteries. 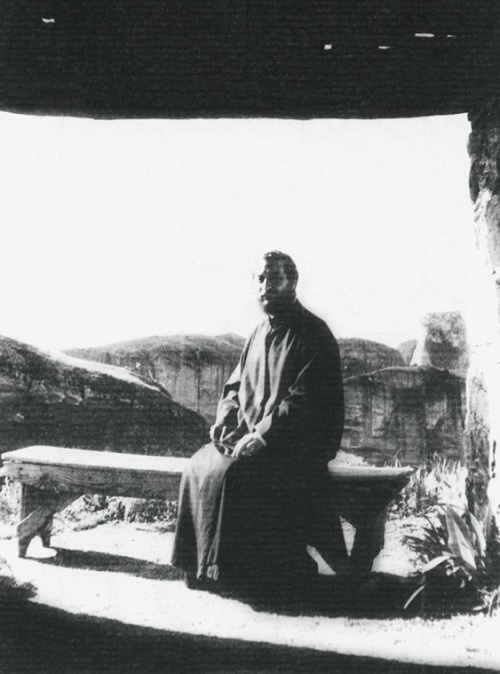 Although his way of life was purely ascetic, on 1 January, 1962, the metropolitan raised him to the rank of archimandrite and assigned to him the task of preaching and confessing and of training the young people in the diocese, making him priest-in-charge of the church of the Divine Visitation, dedicated to the Mother of God, in Trikala. Calm, always charming and approachable, with a suitably clerical demeanour and a noble air, he celebrated the liturgy almost every day from then on until he fell ill. He lived and thrived on the Bread of Life: ‘Bringing God into his vital organs and flashing shafts of divine lightning’ he emerged from his caves like a burning lamp, enlightening the faithful and casting his net for the people of God with his Spirit-filled sermons, educating them ‘in all spiritual wisdom and understanding’.

Young people and children flocked to confess to him, and on these he unstintingly spent time, effort, tears, prayer, ‘and even his own soul’. A new period began then in the life of the venerable Elder. He was no longer alone; he’d become a ‘father’, for many ‘sons and daughters of God’. He felt himself to be, and lived as, a real apostle. His life was devoted to his children in all freedom, without any expectation at all of the slightest recompense or reward. From this host of people, a good number began to consider the monastic life, and, as time went by, the first nucleus of the brotherhood of the Monastery of Meteora was formed. Some of the others were more inclined towards clerical status or family life, though all remained a broader spiritual family with the monastery at its centre.

In 1963, the first two monks moved into the Great Meteora, and, at the end of the school year 1965-66, a large group of high school students went to live as novices under his guidance. On August 6, 1966, his Elder, Metropolitan Dionysios, tonsured him a monk of the Great Habit. The life at Meteora and the progress of his young but charismatic spiritual son brought great joy to the heart of His Eminence and filled it with high hopes. While Fr. Aimilianos was establishing the monastic life at Meteora he was advised by and developed spiritual relations with a number of modern, saintly figures: Fr. Athanasios Hamakiotis, Papa-Dimitris Gangastathis, Elder [now Saint] Amfilohios of Patmos, Filotheos Zervakos, Simon Arvanitis and Damaskinos Katrakoulis. At that same time, he also met now distinguished Serbian bishops who were then students at the University of Athens and spiritual children of that pillar of the Serbian Church, Saint Justin Popović. Later, in 1976, by which time he was already Abbot of the Holy Monastery of Simonos Petras, Elder Aimilianos would visit Fr. Justin in Serbia. It was also at this time that the Elder began his pilgrimages to the Holy Mountain, from which he gained a rich store of spiritual experiences. He became acquainted with Elder [now Saint] Païsios, and at the far end of the Athos peninsular, he met the great athlete of obedience Papa-Efraim Katounakiotis. Thereafter, a special spiritual bond developed between the two men, concerning which the godly Papa-Efraim would often say: ‘I found my lost Elder, another Iosif, the golden-tongued and venerable Elder Aimilianos’ [Papa-Efraim had been a spiritual son of Elder Iosif the Hesychast]. 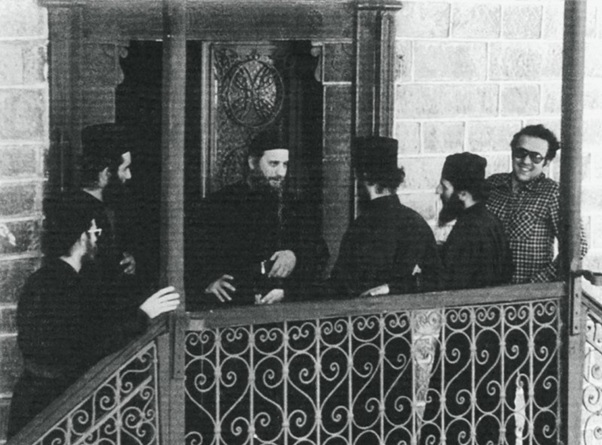 In 1968, with the tonsuring of the then young novices, the brotherhood of Meteora was formed and with profound perception or rather foresight Elder Aimilianos laid the foundations for their coenobitic life. With his gift of insight, he chose and promoted the then high school student Emmanuel Raptis as his successor and the latter is now the Right Reverend Archimandrite Elissaios, Abbot of Simonos Petras. In the year 1972, after years of trials and tribulations, the time had come to form the initial nucleus of a female monastic community, which, under the care and guidance of Abbess Nikodimi, settled temporarily in the Holy Monastery of the Saints Theodore, close to Meteora. While this female community was still in its infancy, the wise Elder was already drawing up its internal Rule- his spiritual testament and his only written work- which was given to the sisters on 5 May 1975, when they had already settled into the dependency in which they live today [Ormylia].