On the morning of 9 May 2019, Archimandrite Elder Aimilianos, former Abbot of the Holy Monastery of Simonos Petras on the Holy Mountain fell asleep in the Lord at the Holy Convent of the Annunciation of the Mother of God, Ormylia, Halkidiki.

You have made known to me the ways of life; you will fill me with joy with your countenance (Ps. 15, 11).

After the unexpected departure to the Lord of Metropolitan Dionysios in January 1970, the need for a place which would guarantee more peace and be more suitable for the monastic life of the brotherhood, away from the noise and the tourism which afflicted Meteora, as well as the insistent invitation of the Holy Monastery of Simonos Petras, which was suffering from a lack of monks at the time resulted in the brotherhood transferring to the Holy Mountain at the end of 1973. Since the position of Abbot of the monastery was vacant, following the demise of Archimandrite Haralambos, Elder Aimilianos was elected by the members of the old brotherhood to the post, in accordance with the Athonite rules. He was enthroned on 17 December by the Holy Community. The installation of the brotherhood from Meteora was welcomed by the Athonite fathers, bringing with it, as it did, hopes for the future. And, indeed, other communities followed, making for a considerable increase in the number of monks on the Holy Mountain. 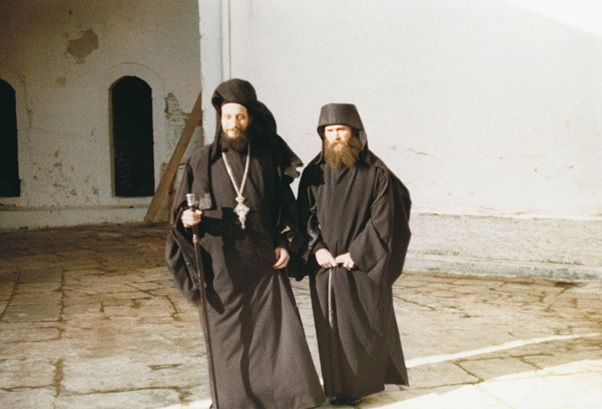 Simonopetra. With the then Abbot of the Holy Monastery of Filotheou, Archimandrite Efraim (1973) [Note the poor state of repair of the buildings the Elder inherited. They aren’t like that now].

In addition to his vigilance, celebrating the Divine Liturgy and his other duties, he threw himself into the task of reorganizing the internal life of the new brotherhood. With wisdom and discretion he adopted the Athonite tradition, with its existing Rules and adapted them with his own personal seal- ‘attending to the divine canons’ of the holy Fathers whom he loved so much and, with a burning thirst and much effort, brought back to the fore- thus creating the Rule of the monastery. With respect and love for the experience of the older monks, he focused the youthful enthusiasm, zeal and dedication of the younger ones, greatly increasing the size of the brotherhood. With his administrative abilities in general and the paternal guidance of his flock, he restored the status and highlighted the centuries-old tradition of this long-famed Holy Monastery. 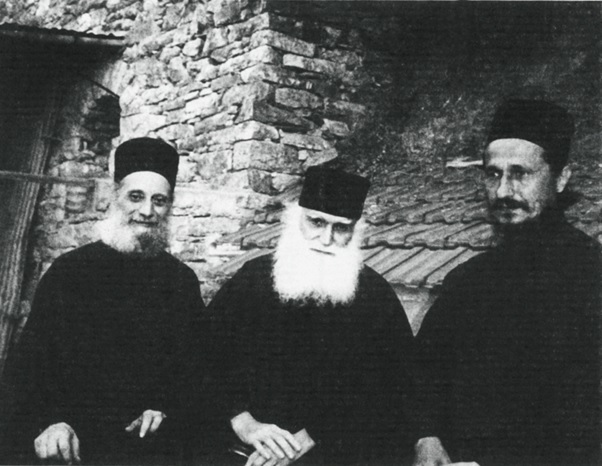 Once the community was settled on the Holy Mountain, he also interested himself in a paternal manner in the establishment of the women’s community which, on 5 July 1974, had moved into the old dependency of Vatopaidi, the Annunciation of the Mother of God at Ormylia. The dependency was bought by Simonos Petras and, with the approval of the local bishop and the support of the Holy Community, became a dependency of the monastery and has functioned as such ever since. 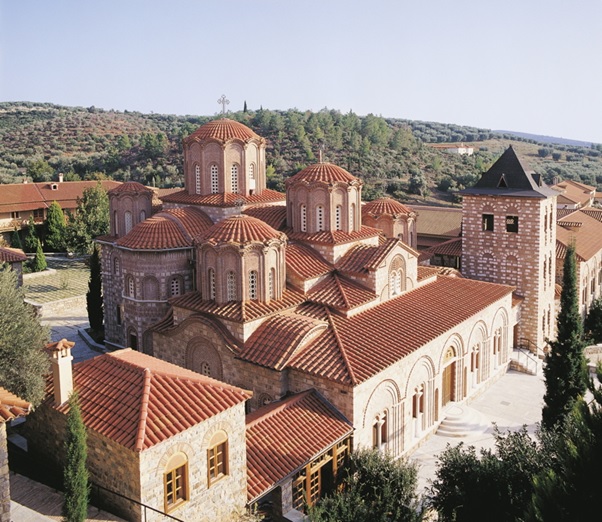 The Elder worked long and hard on the renovation of this small dependency, of which he was to become the wise and inspired co-founder*, since everything had to be started afresh. The first concern was to buy the land around the dependency, so that the nuns could live in peace. In 1980, the building renovations began, ‘by God’s favour and grace’ and with the support of the faithful. Within about fifteen years, it had became a large convent. His joy and emotion knew no bounds when the main church of the dependency was inaugurated by Metropolitan Synesios of Kassandria, in whose person they found a discriminating and understanding hierarch. On October 25, 1991, by a sigillium, that is a command in the form of a letter from His All-Holiness Bartholomew, the Ecumencial Patriarch, it was raised to the status of patriarchal and stavropegic, [which means that it is under the direct supervision of the Patriachate, rather than that of the local bishop].

Following the example of the Fathers, who gave succour to their neighbours in need and affliction, in 1982, he founded the spiritual and social support centre ‘Our Lady of Charity’. This was a bequest from the late Captain Ioannis Hatzipateras and it is run by the nuns of the convent as a humble, altruistic contribution to the life of the people in the surrounding area.

In the Elder’s eyes, all the monastery’s dependencies were Simonopetra: Analipsi [the Ascension] in Athens; Saint Haralambos’ in Thessaloniki, Saint Nikodimos at Pentalofos, Goumenissa; and, in France, Saint Anthony’s, the Transfiguration and the Protecting Veil. A special position was occupied by the Archimandrites Placide Deseille († 2018) and Élie Ragot with their communities. During the period between 1979 and 1984, with the constant guidance and support of Elder Aimilianos, the dependencies we mentioned in France were born: Saint Anthony’s, for men, and the Protecting Veil and the Transfiguration for women. These represent budding shoots as regards Orthodox monasticism in the West.