Elder Ieronymos Simonopetritis: The First Years of his Service

Elder Ieronymos as a monk on the Holy Mountain (1888-1920)
Young Ioannis arrived on the Holy Mountain, made the sign of the cross and thanked Our Lady. Here his love for the Mother of God grew, to such an extent that, to his dying day, he would weep at saying or hearing her name. At the time when he arrived, there were more than 10,000 monks on Athos. Praising God, the seventeen-year-old Ioannis entered that holy location and passed through the gates of the Monastery of Simonopetra, in order to imitate the achievements of the saints of God. This was on 3 October 1888 and, on the 28th of the same month, his name was entered in the book of novices.

As he later wrote: ‘I was received by the Abbot, the venerable Elder, the late Archimandrite Neofytos, who was from Alatsata [close to Ioannis’ home village]… and I was received as a novice, performing regularly any task to which I was assigned. 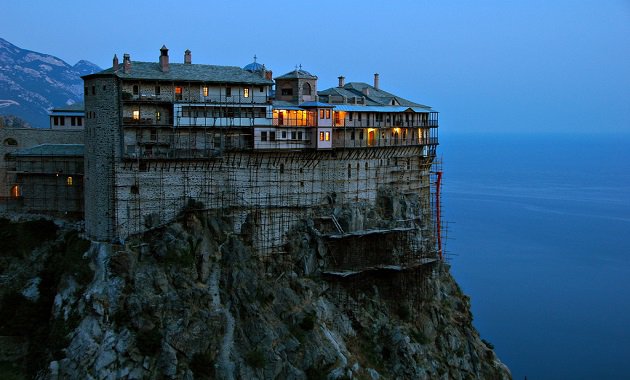 The life he began there was one which thousands of monks had led before him: a life steeped in the remembrance of God, a mystical life with long daily services, frequent vigils and regular fasts. It consisted of the rule, duties, confession and holy communion. And in the midst of these everyday tasks, he continued where he’d left off back home, rejecting anything that was superfluous. He began to study the Scriptures, the ascetic fathers and the lives of the saints, drenching the pages of the books with his tears.

One of his first duties was that of ‘konaktzis’, looking after the ‘konaki’, the house where the monastery’s representative in Karyes [the capital of the Holy Mountain] lived. He returned to the monastery after two and a half years, because of illness. For a short time he was sent to Dafni [the port of the Holy Mountain] and, for a few months to the dependencies on Limnos as cellarer [These dependencies were vital to the monastery which sent logs from its forests and brought back wine, for which the island was famous]. His obedience to the monastery’s authorities is an indication of his humility.

After four and a half years of testing, on Palm Sunday 1893, he became a great schema monk, taking the name Ieronymos and he kept the date of June 15 in high regard, as being date of the commemoration of his patron saint. Once he’d been tonsured, new and greater struggles awaited him. One of the Elders wrote about him: ‘He burnt more petrol on reading than he drank water’ [Petrol for the lamps]. He was always quiet, because he was internally vigilant. Often, when he was alone, he would shed rivers of tears. He’d never go near a fire, even though it was sometimes very cold. He never gave rest to his body, but would only snatch a little sleep sitting in a chair. And no human tongue can describe his abandonment of any personal property. This monk was the support of the monastery. He’d be ready with advice on the most insignificant of issues. He was entirely humble and was the pride and joy of the monastery [Many years ago, I made my first visit to the Mountain and had a letter of introduction to Simonopetra. The brotherhood had just arrived from Meteora and were still learning about their new monastery, but it was clear that they were in awe of a certain Elder Ieronymos, about whom they’d learned from the few remaining monks of the old brotherhood. WJL].

Out of respect for his monastic strivings, the brotherhood increasingly turned to him. They sent him the novices to be introduced into the monastic spirit. He spoke to them with great discretion. One late Elder, who was then a novice, wrote about what Elder Ieronymos told him: ‘Have you come here to become a monk? Have you thought about it properly? The monastic life is a little rose for those who are pure… When you finish the duties that have been assigned to you, you go to your room and sit on the stool. There you’ll voluntarily acquire self-reproach and you’ll think about the fact that there’s no other person for you, only our Lord Jesus Christ, who took away the sin of the whole human race. Then you’ll begin the invisible warfare. When you say the sweet name of the Lord Christ, protect all the parts of your senses, which are glorifying God, lest a devil from the right should enter and separate you from the Lord’s love through familiarity or pride’.

The young monk Ieronymos became the monastery’s secretary, a duty he retained as Abbot. They then appointed him to the difficult task of overseeing all the external affairs of the monastery. He was obliged to leave the Holy Mountain regularly, meet with a variety of people and bring his affairs to a satisfactory conclusion. Early on he was appointed to responsible and difficult tasks involving visits to the monastery’s dependencies. Without reservation, with exemplary obedience, he rose to the challenge of the demands of the monastery’s overseers and spent long periods outside the monastery. He was involved in financial and administrative matters, but never for a moment lost the sense of his monastic calling or the need for inner communication with God.