“The depiction of the three persons of the Holy Trinity” [2]

However, the form, in which the leaderless Father appears, is mainly for us. “I was regarding until the thrones were placed and The Old Of Days was seated and his attire resembling white snow and the hair of his head resembling pure wool ,His throne like flame of fire, His wheels like burning fire”.

And I was regarding in the vision of the night and THERE He was with the clouds of the sky as the Son of Man coming up to the Old of Days arriving and in front of him was taken and the authority was given to Him and the honour and the reign and all the people and races and tongues serving Him.

His authority will be eternal which will not end and his reign will not be corrupted.

The interpretation of the above extract of Daniel is given in an authentic and excellent way by the Holy Chrysostomos who says: “what is the old of days? Being old what did he regard? Owing to the needs of things through which it is shown as himself indicating that in order to believe these criteria are needed and look he says, he is comin as the Son of Man and up to the Old of Days he arrived.

Look also at and the equivalent of honour. In front of him he was taken so as when you see the reign given to him not as a human being think of what he was given.

Regard also the criterion that he received it. In order not to think that this is a matter of time which will not go by and the reign will not be corrupted but it stood and remained. 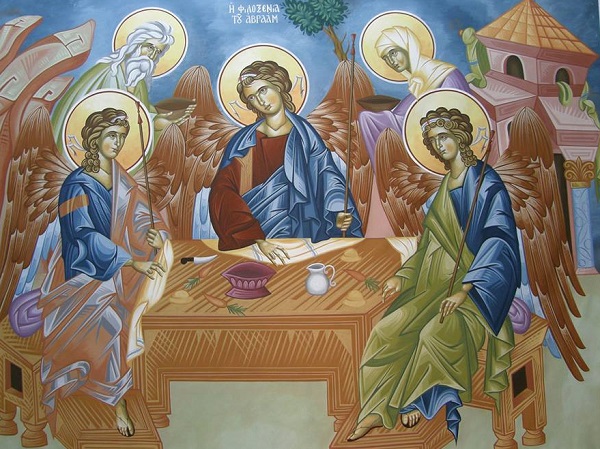 If you do not believe be convinced by things. Did you see him having the same honour as the Father? Because of appearing after the father for this you say that he came together with clouds.

And the honour was offered to him, which he had, in that way. And the peoples, races, tongues will serve Him. He had the authority from above and then He received it which he had.

My spirit was astonished; I Daniel in my habit, and the visions of my head startled me. Similarly under the appearance of what is seen. Father and son he the first and the only one sees as in appearance.

Three things I think that are of more interest from Chrysostomos` s interpretation of Daniel`s vision:

a) It stresses the attention of those who will study Daniel and see that the hair of the head of the ungoverned father are like “clear lamb wool” and is trying to persuade them not to take him as an old man regarding the age.

c) The fact that the Son acquires the appearance of the Son of Man as Daniel describes it, is regarded as given and it is this very appearance which was going to be taken from Virgin Mary. The fact that in a very exceptional way the interest is centered upon the countenance of the ungoverned Father shows precisely this will of the Triadic God, so as the human kind, because with human criteria, is depicted in the countenances, possesses the specific face of the Father in the vision of Daniel.

Approximately the same line of thought as Chrysostomos Saint Kyrillos Bishop of Jerusalem has, who stresses: The Son comes to the Father according to, in a saintly way read, scripture, the Son of Man on the clouds of heaven, drawing a river of fire testing men. If somebody regards deeds as gold, he becomes brighter, if somebody has the deed as having been made of cane and unsubstantiated; it is burned down by the fire. And the Father is seated, having his attire white resembling snow, and the hair of his head as pure lamb wool. This is humanly said what for? Because a king is somebody who is not infected by sins. Whiten your sins so as to look as snow and lamb wool which is for forgiveness of sins or an indication of absence of sins (see Kyrillos the saved volume 2, page 177, published Jerusalem 1868 and Migne 33 page 900 and Apostolic Ministry 39, page 195 and EΠE, volume 2 page 150).

And Ioannis Kolitsaras in Daniel`s translation points out that “on the throne the eternal God and Father is seated”.

Therefore the Old of Days is not only the Son but also the other two persons of the Holy Trinity.

The only distinction among the three persons of the Holy Trinity is the Unborn Father, the Born Son and the from the Father born Holy Spirit. All the rest are common among them. For all the congregation of devout Christians, those which are interpreted through the vision of Daniel by the saints Ioannis Chrysostomos and Kyrillos of Jerusalem, are not only satisfactory but also absolutely in accordance with all those which are cited in the relevant book of the Old Testament.