“The depiction of the three persons of the Holy Trinity” [4]

B) THE HOLY ICON OF HOSPITALITY OF ABRAHAM

Also whoever studies, from the Old Testament, the chapter of hospitality of ABRAHAM, he will make sure that the Patriarch in his tent provides hospitality to God and two built angels.

He who wants to have more secure and reliable interpretations about the content of hospitality as soon as he goes deeper into the Fatherly bibliography he will soon reach the conclusion that the overwhelming majority of the Holy Fathers ascertain exactly the same as a simple reader understands. The God is the focal person and the two angels are seated at Abraham’s table.

The misunderstanding, which was given to hospitality and which tends to become dominant, that Abraham provides hospitality to the Holy Trinity, derives from the fact that when the Patriarch first encounters the three men he welcomes them with “KYRIE” (LORD).

“Raising then his eyes he saw ,and there they are the three men standing on him; and seing them he rushed to meet them from the entrance of his tent and paid respects kissing the earth saying ; “LORD you are, consequently I found favor in front of you ,do not overtake your children” (GENESIS XVIII,2-3). 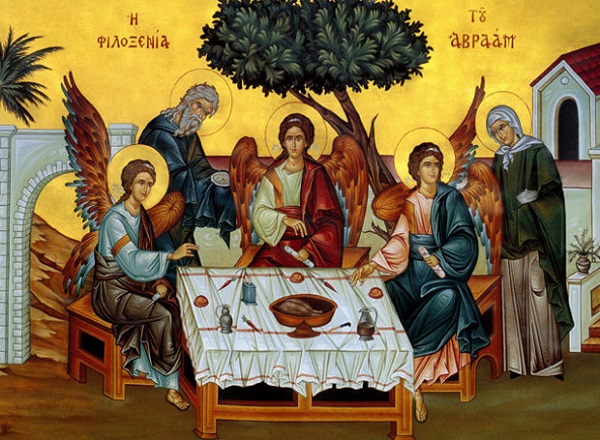 Having been provided hospitality afterwards God informs Abraham that the destruction of Sodoma will follow. “Standing up the men they made it in the direction of Sodoma and Gomorra. Abraham also was walking with them showing them the way….And leaving there they arrived in Sodoma. Abraham was still standing in front of the Lord” (GENESIS XVIII, 16-22).

Here it is shown that the God-Lord remained with Abraham, while the two angels, as it will be shown afterwards leave in the direction of Sodoma. “The two angels arrived in Sodoma in the evening; Lot was sitting at the gate of Sodoma ; Seeing them Lot got up in order to meet them and paid respects kissing with his face the earth; and he said; behold you came to the home of your child” (GENESIS XIX ,1-2).

Lot’ address “Gentlemen” shows that it was not about one Deity (in the undivided Deity the plural has no place) but it was about the two angels.

There is a huge difference between the “Lord-Kyrie” of Abraham and the “gentlemen” of Lot, because the first one is addressed to one angel that is to GOD while the Lot’s “gentlemen” welcomes two built angels.

And it is the same as when our home is visited by one Bishop with two Deacons, we, when we address to them, we address to the one having the honour, providing hospitality to the three of them at the same time, likewise the Patriarch with his inbuilt divine grace recognised the God and addressed to Him honourably and in the way he ought to using the “Lord”.

And in this chapter of Hospitality, the oratory pen of the Golden spoken Chrysostomos, without embellishing his speech, as usual, only interpreting explains the scripture in a specific and lively way.

“Being excited they said the men viewed the face of Sodoma and Gomorra .The angels saying. Because here in the tent of Abraham both the angels and the despot at the same time they left; then the angels as servants were sent in order to destroy their cities, the other remained, exactly like a friend to a friend making it common knowledge exactly like in a fair was going to implement.

Some may claim that the three angels are worshipped as the Holy Trinity according to tradition .But the tradition itself as in the hospitality of Abraham needed the simple title of hospitality on the Holy Icon .The Holy Trinity is well enough of a later time and it was added as an inscription to both older and contemporary icons.

There is even another reason, which convinces several believers to regard Hospitality and the Holy trinity identical. For this responsible is the Metropolitan of Smyrna Mitrophanis (who we came across before),who is the eight sound Triadic Canons, which are read every Sunday at midnight and which use troparia (short hymns) ,in which Abraham is praised, as having been able to provide hospitality to the holy Trinity. The frequent repetition of those troparia and the ignorance of most of them regarding the interpretation of the relevant extract of the Old Testament has created an impression, which is easily overturned in our mind, when we realise how abyssal the distance which separates Mitrophanis and the Golden Orator of the church is.

After all these, it is effortlessly concluded that it is not possible to absolutely identify the hospitality of Abraham with the Holy Trinity.

The inscription “the Being” (Ο ΩΝ) in the middle angel –God and the inscription “The Hospitality of Abraham” we believe that it ensures the correct account of the Holy Icon in every way.