The Virtues of Humility and Patience in Elder Ieronymos Simonopetritis

In 1902, he wrote and set to music a service for Saint Efraim the Syrian and supplied other missing material, such as services for Saints Neofytos and Ioannikos, after whom his own elders were named, Saint Sofronios, the 99 saints in Crete, Saint Ieronymos, and Saint Mary Magdalene. His hymn-writing activities continued with a supplicatory canon to Saint Anthony the Great, Salutations to Saints Minas, Victor and Vicentius, Paul, Patriarch of Constantinople, and Sergius and Bacchus. He made additions to the services of other saints whose holy relics are kept at Simonopetra, and wrote verses of prayer and entreaty to the Lord, Our Lady and various saints. Many of these works remain unknown or are inaccessible. His main contribution, however, was his constant, heart-felt participation in the daily services and his unceasing prayer.

In February 1914, despite his objections, he was honoured by being voted Overseer and a member of the Committee of Elders. In all his labours and travels, he never forgot his monastic duties. On the road, on a ship, on a train, he had his prayer-rope.

He was the mainstay of Abbot Ioannikios during the latter’s serious illness. On 7 December, 1919, he closed the eyes of his second Elder, whose last wish was that his beloved and worthy spiritual child, Fr. Ieronymos, should take over the position of Abbot. It’s worth pointing out that never in his life did he seek, much less strive for, anything. He was always patient and refused every honour and distinction. For years he was asked to agree to ordination, but wouldn’t consent. 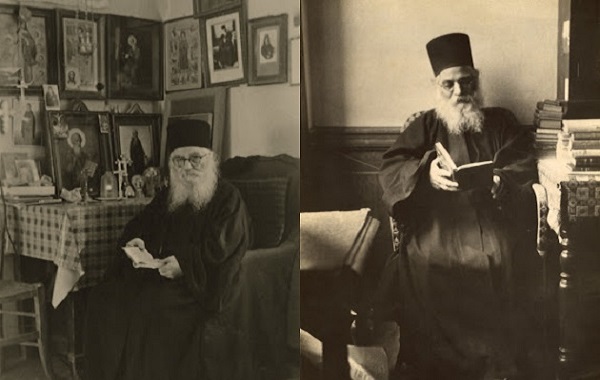 Elder Ieronymos as Abbot of the Monastery (1920-1931)
In the proceedings for 2 January 1920, he was proposed as a candidate for the office of Abbot. In the same year, Metropolitan Irinaios of Kassandreia ordained him deacon on April 11 and priest on April 12, also raising him to the rank of archimandrite and spiritual father, by the laying on of hands. On 18 April, the Sunday of the Myrrh-Bearing Women, he was given the Abbot’s staff, by a unanimous decision of the brotherhood.

In the first months of his tenure as Abbot, he again had to leave the monastery to look after its affairs. Arriving by ship in Piraeus, instead of going to the dependency of Analipseos as arranged, he took another ship, to Aegina. There he visited Saint Nektarios, who was ill by this time. They’d known each other since the saint’s first visit to the monastery in 1898. Thereafter they developed a spiritual bond, which was maintained through Elder Ieronymos’ visits to Athens.

It was the eve of the feast of the Holy Trinity, which the monastery on Aigina celebrated. The saint lay ill in bed and was unable to preside at the vigil. The nuns asked him if they should ring the bells. He replied: ‘Ring the bells. The priest’s coming’. As they rang the bells, Elder Ieronymos entered the monastery. ‘Didn’t I tell you the priest was coming? And he’s the Abbot of a monastery on Athos’, the saint said to them. After the vigil was over, the saint asked Elder Ieronymos to visit all the cells of the nuns, in order to bless them. But he didn’t want to obey God’s bishop and slipped quietly away. When he told the story later, he wept, saying: ‘Who was I compared to a saint…’. He always remembered the saint’s request, however, and, three days before he departed this life, in 1957, he went and blessed the nuns’ cells.

A month before the demise of Saint Nektarios, Elder Ieronymos managed to get to see him in the hospital where he was. It was his nameday, 11 October, 1920.

In August, 1921, he was appointed by the Holy Community* to the five-man committee tasked with drawing up a draft constitution for the Holy Mountain.

His administrative duties and his many other responsibilities didn’t prevent him from devoting many hours to the service of the brotherhood. He worked alongside them at their tasks. Morning would find him kneading bread in the bakery; in winter he’d help with clearing the snow from the courtyards, in the afternoons he’d be in the gardens and at night he’d wash his clothes. In this way he provided an example of humility and hard work. His own Elder had taught him long before to be the first among servants.