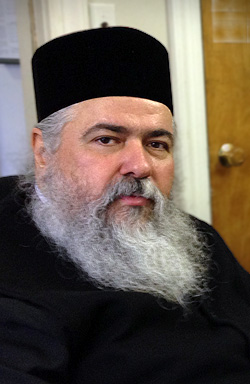 In our lives, my beloved brothers and sisters, God has endowed us with many gifts. Health, people we love and who love us, the beauty of the world surrounding us, the good things we need in our lives. We acknowledge many of these gifts and sometimes thank God for His loving-kindness. But when we’re overwhelmed by difficulties and when badness darkens our minds, we can hardly think straight, much less feel any gratitude.

We’re reminded of this basic truth in tomorrow’s Gospel narrative for the Sunday of the Blind Man (Jn. 9, 1-38). Jesus is walking along with His disciples when they come across a man who’s been blind from birth. The disciples are at a loss to understand this and remember the case of the Paralytic, whom their Master cured and then warned not to sin lest he end up in a worse state than before. So they ask Christ: “Who’s to blame for him being like that? Who sinned, so that he can’t see, him or his parents?”

Jesus answers them that neither one nor the other is the case. The man himself can hardly have sinned, since he was born like that. But neither are his parents to blame. The man was born blind in order that the mighty works of God could be made manifest. Saying this, the Creator of the world makes clay from the soil and His saliva, spreads it on the man’s eyes and tells him to go and wash in the pool of Siloam. The Craftsman places clay on clay and re-creates fallen nature. The sightless man obeys and returns with his vision intact.

Stone portrait of a girl from the roman city of Salona, 3rd century AD. CC Wikipedia

The rest of the story reveals people’s real dispositions: the Scribes and Pharisees found it incomprehensible that Christ should have worked such a miracle, especially on a Saturday. So, over and over, they interrogate the man who was cured. They aren’t convinced and summon his parents. They question them persistently and strenuously. Naturally, they don’t get an answer and merely demonstrate that they themselves are the ones who are truly blind. Their badness and ill-will prevent them from recognizing the Benefactor of the human race. Their blindness is so profound that they undervalue and relativize the divine gifts, in order to promote themselves as the supposedly authentic disciples of Moses.

On the other hand, the man who had been blind turns out to be a guide for those who are supposed to be able to see and to know things. To their persistent efforts to pick holes in his story,  he replies directly: “How could a sinner perform such great miracles? Why do you keep on asking me? Do you maybe want to become His disciples, too?”. In his simple words, which are, nevertheless, full of truth, we see the confirmation of the words of the psalm, “The Lord gives wisdom to the blind” (Ps. 145, 8). He may have spent all his life in bodily darkness, but it seems that the sense organs of his soul were ready to accept and encourage the growth of the divine blessing.

Let us also ensure that we have the eyes of our soul and body open to recognize God’s beneficence and not allow badness and egotism to blind us to His great deeds.