On the Light of the Holy Spirit

Discourse XXXIII. On the Light of the Holy Spirit

In the third ode of the canon at Mattins on the Monday of the Holy Spirit, the hymn has Christ saying ‘I shall send you the Spirit of me and of the Father’. We recognize three hypostases of God- Father, Son and Holy Spirit- and know that these are not confused. We do, however, worship One God and this text by Saint Symeon makes this very clear. For the most part, the light he is talking about is the Holy Spirit. But Christ is the light of the world. He is Light from Light. And, quoting Christ’s words, Saint Symeon refers to Him as the ‘God of all’. As Saint John Chrysostom says, the Holy Spirit is ‘of the same honour ‘ and ‘of equal honour’, so, although on the Monday after Pentecost we particularly venerate the hypostasis of the Holy Spirit, in doing so we also worship the other two Persons of the Holy Trinity. 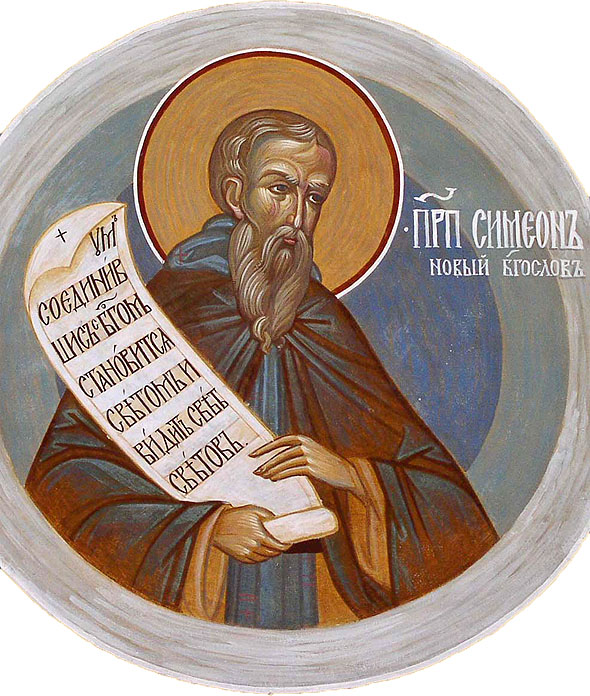 God is fire and is called this by all inspired scripture, while the soul of each of us is a lamp. Now a lamp, before it receives a flame and is lit, is completely in darkness, even if it’s full of oil, tow or other combustible matter. By the same token, even if the soul is adorned with all the virtues, unless it receives the flame- that is unless it partakes of the divine essence and light- it’s still unlit and its works are uncertain. Everything must be tested and made manifest in the light.

Those whose lamp of the soul is still like this- that is, untouched by the divine fire- are in greater need of a guide with a torch, somebody who’ll discern their actions and, with compassion for the faults revealed to him in confession, will immediately correct the errors they’ve made. Those who walk at night can’t help but stumble, any more than those who haven’t seen the divine light can avoid fault. As Christ says: ‘Those who walk during the day do not stumble, because they see the light of this world. But those who walk at night stumble because they do not have the light in them’. When He said ‘in them’, He meant the immaterial light, since no one can have natural light in them.

It’s of no use to people walking in the dark that they have lots of beautiful lamps, if all of them are unlit, since they help neither themselves nor other people to see anything. Similarly, those who appear to have all the virtues in them, but not the light of the Holy Spirit, can neither see their actions properly nor be entirely certain whether or not they’re pleasing to God. They can’t guide others or teach them the will of God. Even if they were to become a patriarch among men, they aren’t fit to hear the thoughts of others unless and until the fire shines bright in them. For Christ says: ‘Walk while you have the light, so that the darkness may not overcome you. If you walk in the darkness, you do not know where you are going’. If people don’t know where they’re going, how will they show the way to others? What’s the point of someone putting an unlit lamp on a stand if it lacks a burning light? That’s no way to act. So what should they do? What the God of all has declared, when He said: ‘No-one lights a lamp and then puts it in a cellar or under a bushel, but on a lampstand so that those who enter may see the light’. After saying this, He adds the features of those guided by the lamp and of those who have the light within themselves: ‘The eye is the lamp of the body’. What eye is He talking about, other than the intellect? Which can’t become simple unless it sees the simple light. The simple light is Christ. Those who have this light shining in their rational faculties are said to have the intellect of Christ. When your eye’s simple like this, then the whole of the bodiless body of your soul is bright. If, on the other hand, your intellect’s wicked, that is darkened and extinguished, then your body will be dark as well. So be careful that the light in you isn’t darkness. He says, ‘Watch out and don’t believe that you’ve got something that you don’t, in fact, have’. See how the Lord speaks to us in the same way as He did to His servants: ‘Don’t deceive yourselves into thinking that you have the light within you, when, in fact, it’s not light but darkness’. See to it that we pass on the same words of the Lord to our fellow servants and don’t say anything perverted or false.

So we say: make sure that, while we think we’re in God and seem to have communion with Him, we should not, in fact find ourselves excluded and separated from Him, since we haven’t yet actually seen His light. If our lamps- that is our souls- were truly lit, they would shine brightly within us, as our Lord and God Jesus Christ said: ‘If then your whole body is full of light, with no part of it in darkness, it will be as full of light as when a lamp gives you light with its rays’. What testimony greater than this can we bring you for your edification? If you don’t believe the Lord, tell me, how will you believe your fellow servant?