The Church pays medical science the honor due to it

Despite this, we can’t ignore the value of medical science, which comes as a gift from God to comfort us in the sickness of our spiritual and bodily condition. Christ Himself came into the world as the doctor of our souls and bodies. His manifestation of the kingdom of God was marked by the cure of the sick. But the various cures which have been effected by saints in the world are recognized as being the result of God’s special grace. And typically these cures involve the completion of a bodily organ, as in the case of the man who was blind from birth and was healed by the Lord[1], but also the transplantation of a body part, such as the case where Saints Kosmas and Damianos took a shin from a corpse and transplanted it into a patient’s leg. Finally, bodily ailment is something akin to spiritual sickness. Cure of the bodily ailment is offered as a model for our spiritual cure and recovery. Just as a bodily ailment means avoiding harmful foods, so sickness of the soul involves observing God’s commandments. 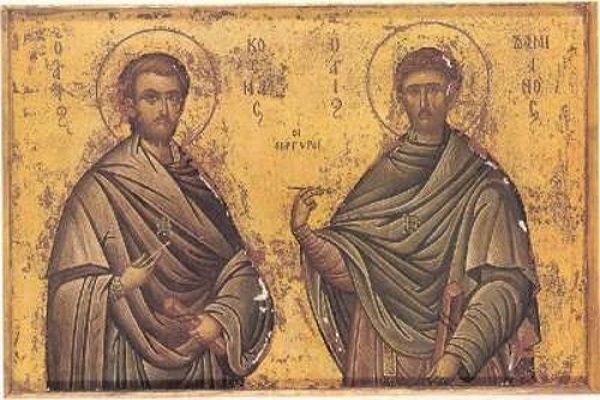 There’s no reason for us Christians to avoid medicine or seeking out the most experienced doctors[2]. But whether we go to doctors for help or avoid them, we have to look to God and the health of our souls. In any case, this is what we should be doing: ‘Whether you’re eating, drinking or doing anything else, do it always for the glory of God’[3]. So we, the faithful, have recourse to doctors and medical science whenever necessary, but without resting all our hope on them[4].

Medicine’s concerned with the restoration or improvement of our health. In pursuing this, however, it’s also involved with prolonging life. The Church doesn’t hinder medicine in its efforts, but neither does it ignore the relative nature of its benefits. At the same time, however, it promotes its own positions on people and their lives. The aim of the Church isn’t to give people some sort of means of survival, but rather the life which defeats death. In the ascetic tradition of the Church in particular, there is much emphasis on a restrained use of medicine and medication so as to overcome an excessive love of this life. Naturally, this is mostly the business of ascetics. But no Christian should be indifferent towards this attitude, since we should all have an ascetic disposition. And it’s natural for this disposition to be linked to our spiritual maturity, making us more ready to give than to receive. And, of course, this also holds true in the matter of transplants.

Transplantation is now applied on a wide scale and in a variety of forms. It begins with blood transfusion, which is an exchange of liquid tissue, proceeds to the provision of one of the double organs and ends with liver or heart transplants. Recently, in fact, within the context of gene therapy, we’ve also seen the transplantation of modified cells for the treatment of illnesses such as cystic fibrosis. Besides, transplants may concern only a single person, if tissue is moved from one part of the body to another, though more people will also be involved if tissue or organs are taken from them. Finally, the donor may be alive or dead. Some ecclesiastical and theological circles have expressed serious reservations or even categorical objections regarding our right to act in this way. These objections are most keenly felt, naturally, when a main organ is involved, such as the heart, the assumption then being that the donor is dead.