Transplants have become part of everyday life in modern society. The positive and negative positions which have been expressed on them in ecclesiastical and theological circles have usually been of a fragmentary nature. The Orthodox Church has not yet taken a final decision on them. And any such position cannot be adopted by isolated individuals or committees attempting to base their views on its tradition, but will have to be at the behest of its universal conscience. 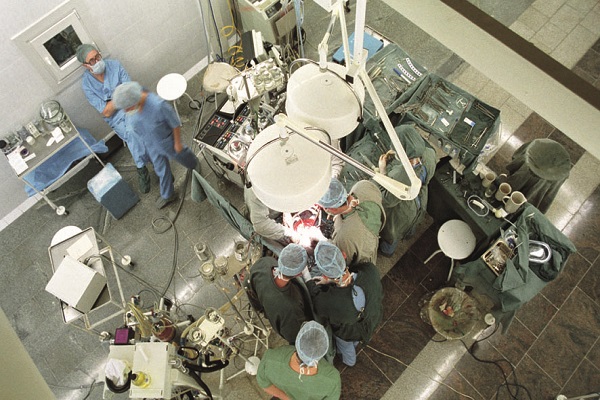 The beginnings of transplants go back to ancient times. The ancient Egyptians already know how to make skin grafts. The first transplants of vital organs and human body tissue, however, took place in our own day. The first successful kidney transplant was completed in 1954 and the first heart transplant occurred in 1967. Since then, transplants, as methods of treatment not restricted merely to survival but to the eradication of health problems, have become much more common and have been received enthusiastically in all parts of the world.

Transplants: the search for earthly immortality?
This enthusiasm can no doubt be attributed to the magnitude of the achievement, but also perhaps to people’s desire today to achieve some kind of earthly immortality. This is why it would be no exaggeration to say that it runs the risk of leading us astray from the ultimate aim of our existence and its deeper problems. Indeed, if we take into account the fact that the human lives that can be saved with transplants aren’t as many as a thousandth of those which are destroyed by abortions, the relativity of the enthusiasm for human protection becomes clearer.

Excessive confidence in transplants concentrates our attention on our bodily health alone and, at the same time, creates the false impression of some related, earthly immortality. But the quest for this immortality can’t be reconciled with the expectation of eternity, and the faith in victory over death through Christ. This means that the Church can’t have as its aim the dissemination of some slogan such as ‘Give and Save’, which is all too easily drawn into consumer or commercial perspectives. Any such position would reveal secularization and an entry into the spirit of the times.

In the perspective of the Church, biological life and biological death lose their dramatic rivalry and become relative. In any case, because of their very nature, life and death are intertwined and interwoven. Life unfolds as a process of death. And there’s death in every phase of life[1]. In particular, it’s there as the phase of the final change of life: as a transition from this fleeting life to real existence. This prospect does not merely eliminate the tragic nature of death, but also creates the possibility of a positive and even aggressive way of dealing with it. Biological death is common to humans and beasts. We Christians don’t need to wait passively for death to find us. We can accept it willingly and, in this way, find real life.

But in the same way that bodily death can serve spiritual life, so bodily illness can be positive for spiritual health. We should not, of course, ignore the importance of the life and health of the body. In any case, it’s natural that the composite anthropology of the Church, which insists on our psychosomatic unity, should take a positive view of both spiritual and also bodily health. This is demonstrated by the many prayers of the Church for the health of our soul and body[2]. At the same time, however, the Church also gave its blessing to medical treatments and procedures.

Despite its astonishing achievements, modern medicine expresses and extends the humanistic anthropology which was rejected in the Orthodox sphere because it traps us within the realm of creation and mortality. Its interest in people is exhausted by our biological functions and life is equated with biological survival. This is why it’s often been said that, where medicine alone reigns, God is dethroned.

[1] ‘Life and death, as they are called, apparently so different, are in a sense resolved into, and successive to, each other’. Gregory the Theologian Discourse 18, 42, PG 35, 1041A.
[2] See particularly the third prayer of the Service of Divine Unction: ‘Raise them from the bed of pain and suffering. Restore them hale and whole to Your Church, pleasing You and performing Your will’.