It’s been a pretty chilly winter so far. Heavy rain, strong gusts and long, cold nights. Despite cranking up the heater and doubling up on quilts, the only logical solution to solve our winter-blues is a trip to Greece! Sadly, we all can’t just get up and escape this miserable weather, that’s where VOD binging is the next best option. However, with all the terrible remakes and new shows, with stories that sound more like a political science lecture, even this option seems bleak – however – there IS a real alternative: Byzanfest.

What is Byzanfest? It’s the world’s first and only online Orthodox Christian short film festival. An initiative of TRANSFIGURE MEDIA, Byzanfest is dedicated to offering the very best Orthodox short films from around the world, on-demand & free. All the films tell engaging stories about our faith, the world and what it means to be a complete human being in God’s Image.

This year has been our most successful event. More submissions were received and the quality has exceeded the benchmark of previous years. Filmmakers from Greece, Serbia, Romania, Georgia, USA, Canada and Australia participated. This year’s 12 finalists range from the deeply theological to the technically mesmerising. 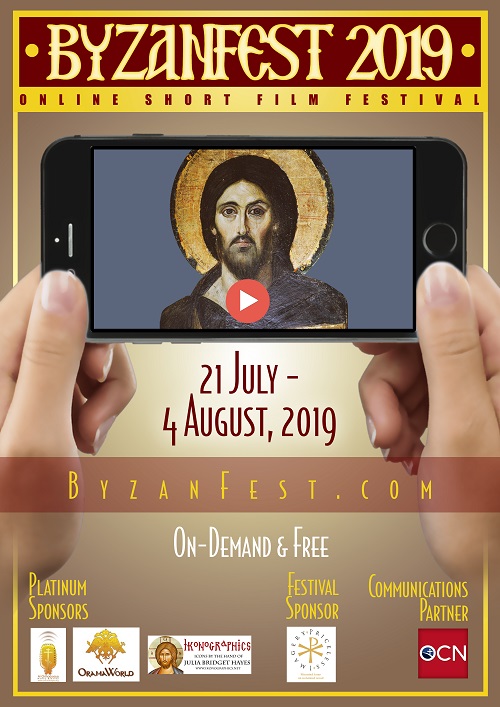 The sci-fi/noir film from Greece by Efthimious Hatzis, Christmas Anti-fable, tells the story of an alternative retro-future where the humble worm is on the brink of extinction. Despite being such as lowly creature, the disappearance of the worm means ecological disaster for the planet and mankind. Despite the do-or-die severity of this threat, will man be able to humble himself to become a worm? Blending iconographic principles with a science fiction scenario, this film is set to be a Festival favourite, nominated for Best Film, Best Director, Best Screenplay and Best Cinematography.

The Middle Way, a Canadian documentary, offers a glimpse into the life of Jasper, a young man who resides gracefully between two worlds: fronting a rock band, the other, a Church chanter. In an age where youth are under immerse pressure to conform to new societal norms, which include abandoning any level of a spiritual life, Jasper shows us how we can walk the ‘middle way’ to realising our full potential whilst sided with Christ.

One of our most creative and entertaining films is by Nick Shaheen from North America, called M.A.R.C. In his film, a man buys a drone called M.A.R.C (Meteorological Assisted Robotic Computer) capable of controlling the weather. Though such a device would be welcomed right now during an Aussie winter, this sci-fi comedy shows the miracles and pitfalls when technology and consumerist instant gratification clash. Full of cutting-edge special effects, M.A.R.C is nominated for Best Film, Best Director and Best Cinematography.

The only Australian film to make it to the finals is from The Brothers Robinson, a popular YouTube channel. In Stephen and Andrew Robinson’s film, The Alternate (nominated for Best Director and Best Screenplay) a mysterious guide walks the delicate line between our dimension and a parallel world. A vibrant and beautiful film about the true potential of our world if we only loved as much as God.

Another potential Festival Favourite is, The Throne of Saint Sava. Commemorating the 800th anniversary of the autocephaly of the Serbian Orthodox Church, this is Byzanfest’s first ever animation, done in claymation style. What makes this remarkable film even more interesting is that it was done by 14-year old Jakov Popov from Serbia. Having made several other claymation shorts, Jakov’s parents recognised his talent from a young age and established a family studio, DOM Studio, to support their son and his destined future in animation.

All these films, including others, will be made available online to watch and share from Sunday 21st July from 8pm (Melbourne time zone) until Sunday 4th August 2019. Audiences need to go to www.byzanfest.com which will take you directly to the YouTube channel hosting this Festival. During our last Byzanfest over 8,000 visitors watched the Festival, we expect this year to definitely exceed that record. Audiences are also able to vote for Audience Favourite by clicking the ‘thumbs up/like’ button under their favourite film.

What also makes this year’s Byzanfest special is the increase in number of Global Screening Partners (GSPs). These are Orthodox churches/organisations that host live venue screenings. Last time we had two live venues in North America, this year we have 11 GSPs of which eight will be hosted in Australia. The purpose of GSPs is to take the Festival from being just a digital event to a real-world event, connecting intimately with fellow Orthodox communities around the global. These events provide churches and youth groups the opportunity to connect with their communities and strengthen fellowship within a friendly and fun social environment. Here is a list of Australian screenings, specific details can be found on the Byzanfest website:

The Transfiguration of our Lord Greek Orthodox Church (Thomastown, VIC)

We would like to encourage people to attend screenings which are occurring closest to them so as not to ‘take away’ from parishes working hard to make these live screenings a success. All money generated through ticket sales or donations goes directly to funding more Orthodox film and art projects through TRANSFIGRUE MEDIA.

We are also blessed to have an outstanding judging panel of Orthodox Christian filmmakers. Dr. Norris J. Chumley is an EMMY award-winning executive producer, author, director and professor, who is best known for his film, Mysteries of the Jesus Prayer. Ivan Jovic, from Serbia, is the filmmaker behind The Healing and Legacy, as well as working on a new theater production and a feature-film to be shot in Greece. Nicholas Savas is a U.S. based actor and producer with over 17 film/TV credits. He graduated with his B.A. in Religious Studies and his Masters in Theological Studies.

The Festival is incredibly grateful for the massive support of its Platinum Sponsors who have contributed not just to operational costs, but donated beautiful hand-written icons as prizes: Orama World, Ikonographics and Al Orthodoxiya Radio. As well as Festival Sponsor, Priceless Imagery, and Communication Partner, Orthodox Christian Network (OCN).

We hope you enjoy Byzanfest 2019 and fully immerse yourself with the online experience. Again, the finalists will be available for viewing from 21st July 2019 on www.byzanfest.com

You can find Byzanfest & TRANSFIGURE MEDIA on Facebook for all updates.

What is Byzanfest?
Established in 2014, Byzanfest is the world’s first and only online festival that screens short-films made by Eastern Orthodox Christian filmmakers. The Festival will go live from Sunday 21st July until 4th August 2019, running concurrently with live venue screenings which are hosted by Global Screening Partners.

As the world’s media and entertainment have become increasingly on-demand and interwoven with social media, Byzanfest saw the opportunity to venture into an emerging concept: the online festival. New and innovative, such an event is not limited by the physical constraints of traditional venue-based festivals. Byzanfest looked ahead towards the future of entertainment and wanted to engage globally with both Orthodox and non-Orthodox audiences. The Festival encourages interactivity where viewers can share through all social media platforms. The Festival showcases films which reflect Orthodox Christian themes, beliefs, culture and values, as well as being artistically creative. It is worth mentioning all funds raised from this Festival will go towards funding small individual Orthodox film and art projects.

The name ‘Byzanfest’ is in honour of the great Byzantine Empire, a place of wisdom, art and faith. Although it may no longer exist, the mindset and values of Byzantium are embodied in the creative works of Orthodox Christians in the Digital Era.

Byzanfest is an initiative of TRANSFIGURE MEDIA, an online organisation that specialises in showcasing, distributing, networking, mentoring and funding the creative works of Orthodox filmmakers and artists. The primary goal is to prove to artists and the world that someone who lives the Orthodox faith can integrate that phronema flawlessly into their creative process. Just as Christ transfigured before three of His disciples to reveal His Glory, may we through art express Christ and transfigure the world and culture around us.

Message from the Founder
It is with great joy and anticipation to welcome you to the third Byzanfest Short-Film Festival. This year’s submissions were of outstanding quality and it was an incredibly hard task to select the finalists.

The best way to describe some of these films is ‘cinematic theology’. This year’s selection includes exceptional examples, such as, Christmas Anti-fable, A Cup & Bread and The Alternate, because of their multilayered and creative approach to intertwining theology with the moving image. We also have some fantastic films of remarkable technical and creative ability: M.A.R.C is about a man’s struggle with consumerism and technology, and, The Lonely Inventor is about the smartest man trying to find love using science.

Submissions came from all over the world including: Greece, Serbia, Romania, Georgia, USA, Canada and even Australia. Not only will these films be available on-demand, but will be screened at 11 live venues by our Global Screening Partners in Victoria, New South Wales, Queensland, Canberra and USA. It is also a big honour to have a judging panel which consists of some of the finest Orthodox filmmakers: Ivan Jovic (The Healing) and Norris J. Chumley (Mysteries of the Jesus Prayer) and Nicholas Savas.

The Festival is known by many in the Orthodox filmmaking circles and it provides a vital platform for them to be inspired and be discovered by the world and Church. This Festival is important because it is here that filmmakers have the opportunity to express themselves and to hopefully one day become cinematic Masters, such as, Andrei Tarkovsky and Pavel Lungin, just to name a few.

Please join me as we go on a journey of discovery and wonder.

About the Founder
Born in Melbourne, Australia, Chris belongs to the Greek Orthodox Archdiocese of Australia. Whilst attending Melbourne Grammar School, Chris discovered his love of cinema, but pursued higher studies. At Victoria University, he graduated with Bachelor of Laws (Hons)/Bachelor of Marketing degrees, majoring in Intellectual Property Law. Whilst at university, Chris made several short-films and worked on the sets of many others. Chris established the Queen St Film Festival (in honour of his law campus) where he directed and was patron from 2005-2009.

Chris is the founder and owner of TRANSFIGURE MEDIA. Operating since 2008, TRANSFIGURE has become the world’s biggest media and arts network exclusively for Eastern Orthodox Christians. The organisation’s goal is to showcase, distribute, network, mentor and fund the art of Orthodox Christians working in various creative industries.

He is also a member of Vatopedi Monastery’s International Association of Digital Media and Orthodox Pastoral Care (DMOPC). In June 2018, Chris, the only Australian representative, was invited to give a presentation at the DMOPC Conference in Crete, entitled: Jacob’s Digital Well: how a single online media house can strengthen the faithful and help evangelise the world.

Chris also writes a column about media, culture and faith in TO VEMA, the monthly newspaper published by the Greek Orthodox Archdiocese of Australia.