This is an excerpt from Lactantius describing that “Constantine was advised in a dream to place the celestial sign of God on his shields… Having been armed with this sign, the army took up its weapons…”[1].

After routing Maxentius’ forces in northern Italy, Constantine approached Rome in October. According to Eusebius and Lactantius, on October 27, the day before the two armies would battle outside of Rome near the Milvian Bridge, Constantine had a vision instructing him to fight in the name of Christ, with his soldiers’ shields bearing the symbol of Christ. The symbol was either a cross or the labarum, an intersection of the chi (X) and rho (P), the letters of Christ. 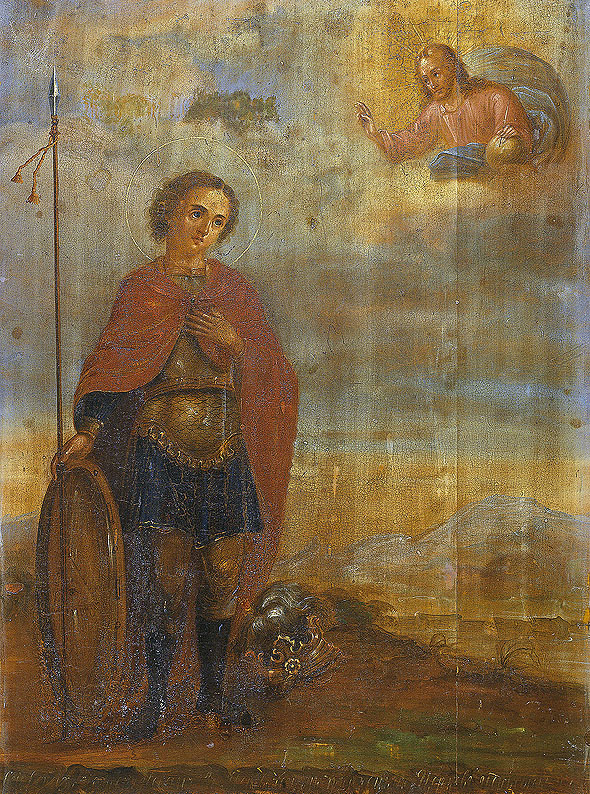 Christian author Lactantius, writing several years after the battle, described that “Constantine was directed in a dream to have the heavenly sign delineated on the shields of his soldiers, and so to proceed to battle. He did as he had been commanded, and he marked on their shields the letter Χ, with a perpendicular line drawn through it and turned round thus at the top, being the cipher of Christ. Having this sign (ΧР), his troops stood to arms.”[2] Eusebius, the Constantine apologist, also described the event in “Life of Constantine,” which he wrote after Constantine’s death in 337. According to Eusebius, Constantine saw a vision of a cross rather than the letters of Christ. “He saw with his own eyes the trophy of a cross of light in the heavens, above the sun, and bearing the inscription, CONQUER BY THIS – Εν τούτῳ Νίκα[3]. At this sight he himself was struck with amazement, and his whole army also, which followed him on this expedition, and witnessed the miracle,” wrote Eusebius. The following day, Constantine’s outnumbered forces defeated Maxentius’ forces, which tried to retreat over the River Tiber on a pontoon bridge. In the chaos of the retreat, the bridge collapsed, leaving only the too-narrow Milvian Bridge as a route to escape. Maxentius and many of his men would drown or be trampled to death in the escape. Constantine rode into Rome. There, at around the age of twenty-four, Constantine was hailed as emperor of the western half of the empire. He was hailed as a man of boldness, favoured and guided by the gods. Constantine’s crucial victory at Milvian Bridge proved one of the most decisive moments in world history, while his legalization and support of Christianity, together with his foundation of a ‘New Rome’ at Byzantium, can be seen as amongst the most momentous decisions made by a European ruler.

Lactantius, contemporary of Constantine, was the first Western thinker to adumbrate a theory of religious freedom rooted not in notions about toleration, but in the nature of religious belief. According to his writings about Constantine, Lactantius emerges as the key figure formulating ideas that would find expression in Constantine’s religious policy[4].

On the other hand, Eusebius, underlines that Constantine adopted the God of the Christians because he wanted, among other things, to use the power of this God to unify the empire and give him a secure and successful reign. Because Eusebius’ favourable account gave a primary place to political factors in Constantine’s conversion, Burckhardt[5] presumed that his conversion was insincere. By putting “a pious veneer over such raw ambition,” says Burckhardt, Eusebius was “the first thoroughly dishonest historian of antiquity”[6]. On the other hand, Meyendorff and Norwich agree that the text of Eusebius’ and Lactantius’ writings about Constantine do not try to cover-up, gloss over, or address the emperor’s contradictory religious actions. Mainly, Meyendorff asserts, “no single human being in history has contributed to the conversion of so many to the Christian faith.”[7] Norwich reiterates this opinion on a global scales stating that “no ruler in all of history has ever more fully merited his title of ‘the Great’… [Constantine has] serious claim to be considered the most influential man in all of history.”[8].

Generally, someone can documents that no Roman Emperor before Constantine had ever done this things for the Christianity and for the establishment of a Christian Empire. Eusebius of Caesarea and Lactanius were to see in Constantine the first emperor who was a ‘friend of God’ and thus chosen to proclaim his message to the world. All of Constantine actions about thee Christianity (the Edict of Milan, the First Ecumenical Council and the transference  of the capital of Roman Empire from Rome to Constantinople) weigh in favor of the opinion that Constantine was exposed to Christianity early in life, that he was tolerant of Christianity, if not promoting it, in his early rule. And that his apparent “delay” in making Christianity the imperial religion, and postponement of baptism, are not evidence that he was a pagan with mere affections for Christianity. Conversely, they are evidence that he was deeply convinced of the truth of Christ from early on and worked diligently for its assertion within the empire, step by step, as allowed by the providence of God[9].

Based on sources of Lactantius and Eusebius, Schmemann excels in synthesizing the historical and personal dynamics of Constantine’s conversion, saying, “In Constantine’s mind the Christian faith, or rather, faith in Christ, had not come to him through the Church, but had been bestowed personally and directly for his victory over the enemy — in other words, as he was fulfilling his imperial duty. Consequently the victory he had won with the help of the Christian God had placed the emperor — and thereby the empire as well — under the protection of the Cross and in direct dependence upon Christ. This also meant, however, that Constantine was converted not as a man, but as an emperor. Christ Himself had sanctioned his power and made him His intended representative, and through Constantine’s person He bound the empire to Himself by special bonds. Here lies the explanation of the striking fact that the conversion of Constantine was not followed by any review or re-evaluation of the theocratic conception of empire, but on the contrary convinced Christians and the Church itself of the emperor’s divine election and obliged them to regard the empire itself as a consecrated kingdom, chosen by God”[10].

Lactantius and Eusebius of Caesarea promulgated Constantine’s reputation as the “first christian emperor” has been promulgated. Despite the debate over the sincerity of Christian faith of Constantine, since he was baptized only on his death bed, his support for Christianity, however, was sincere and reflected in his policies. Because of Constantine, Christianity became the religion of the whole empire. Christians could worship openly, and imperial patronage resulted in the affirmation of a single creed. However, the bishops had the right to ask from the emperor the imperial support. Thus, Christianity was changed from a prosecuted religion to a faith with a disciplined hierarchical institution. Of course, we cannot refuse the fact that  Lactantius and Eusebius of Caesarea may try to cover-up, gloss over, or not address the emperor’s contradictory religious actions. The fact is that, during his reign, Constantine was involved in a number of events that appear to contradict his religious beliefs, but the unquestioned subject is that Constantine had been sincere in his beliefs for Christianity.

Burckhardt, J., The Age of Constantine the Great, University of California Press, California1983

Harnack, A., The diadosis of Christianity during the first three centuries, English transl. of J. Moffatt, NY 1904.

G. Metallinos, “Constantine the great and the historic truth“, http://www.impantokratoros.gr/megas_konstantinos_sykofanties.print.el.aspx (2010).

Vasiliev, V., History of the Byzantine Empire, transl. from the Russian by Mrs. S. Ragozin, 1928