The sole exception in this book is the mention of the person of Elder Nektarios Marmarinos, who became the founder of the Monastery of Saint Patapios. We are not writing a eulogy of the man, but would address a few words related to his life and activities, with the aim of revealing how the Monastery of the wonder-working Saint came to be built. He is now in the twilight of his life and has tasted cups of many sorrows in his efforts to establish the Monastery and bring his work to a successful completion. He was never interested at all in personal promotion, and so we can do no spiritual harm to the Elder and his work, which is, indeed, a labour for God.

Elder Nektarios was born on 3 November 1921, on the island of Aegina, the place where so many saint have been born and bred. He was the son of poor, devout islanders, Fotios and Evangelia Marmarinos and the brother of Anastasios, Mihaïl, and Marina, who later died of tuberculosis as a twenty-year-old during the German Occupation. With this much-loved sister of his, he would visit the Monasteries on Aegina, where they would sip at the honey of the monastic state and imagine a life of dedication. 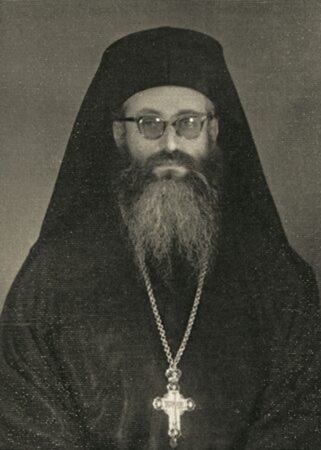 In those years, his spiritual father was Elder Ieronymos Apostolidis of blessed memory, the Hesychast of Aegina (†3/ 16 October 1966), from whom he learned the Jesus prayer, piety and love of the services. His monastic inclination and calling were strengthened. When he was still a child, in his home town, Kyriakos, as he then was, would go to the remote Monastery of Our Lady Chrysoleontissa in the hills on Aegina. Looking down on the Monastery of Saint Nektarios, he would beg the great saint of the 20th century: ‘Saint Nektarios, you built your little monastery here. Help me to build a monastery as well, where I can see the brides of Christ fighting the good fight of virtue’.

When he’d completed primary school and a year of middle school, he went to study at the Ecclesiastical School in Hania, where he surprised one and all with his integrity. After a short time, God’s providence had him studying at the Ecclesiastical School of Corinth, where he was fortunate to enjoy the attention and protection of Metropolitan Mihaïl (Konstantinidis) of Corinth. While he was at the School, he served as ecclesiarch in the church of Saint Foteini.

During the course of his studies, when he was chatting to his fellow-students, he would often speak of the personality and miracles of Nektarios, the saint of his place of birth. His fellow-students, however, spoke with equal enthusiasm about their own Saint Patapios, whose relics were discovered in his cave in Loutraki in 1904. From the courtyard of the School, they pointed out the cave, which looked like a little white speck on the Yeraneia Mountains. 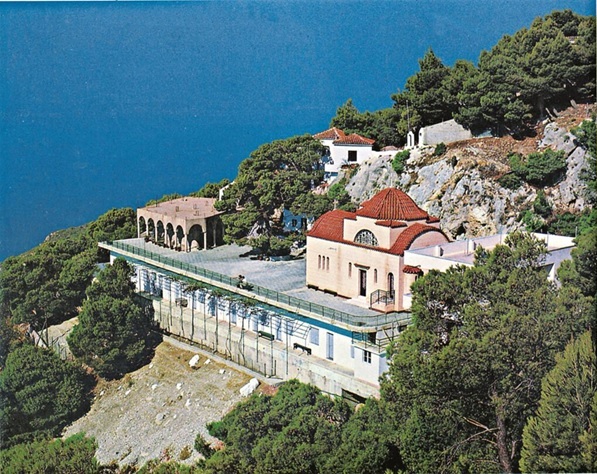 When he later went up the mountain to venerate Saint Patapios, together with a fellow-student, he was overcome with religious awe and his soul felt a ‘divine attraction’ for the location. As he made his prostration, he actually prayed: ‘Saint Patapios, help me to build a monastery here, so I can see a monastic community ceaselessly giving glory to the Lord, with the incense rising as an acceptable sacrifice to the majesty of His throne’.

Thereafter, it was his custom to go up to the cave with a blanket under his arm and, after praying, to lie down to rest in the shade of a large pine tree.

The years passed and he kept alive his desire to build a monastery to the saint. But how? He prayed intensely to find a way to bring this about. Then Saint Patapios himself revealed his wishes in a vision. Kyriakos saw the saint, bathed in light, sitting on the coffin holding his relics. The saint looked at him with celestial serenity and, shining in the divine radiance which enveloped him, he repeated three times: ‘The monastery will be built. Yes, it will’. 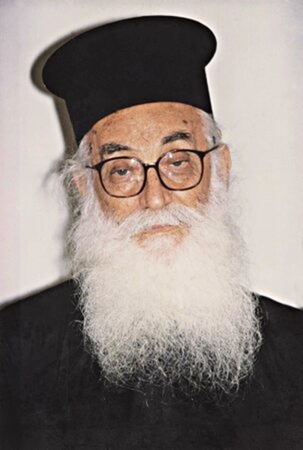 So young Kyriakos was confirmed in his decision and began to work to bring to fruition his holy purpose. Somewhere, he found a pamphlet containing the Life of Saint Patapios and he had it published in book form, both for the spiritual benefit of pilgrims and to get work on the monastery started. At the same time, he performed spiritual tasks in Corinth, in a church dedicated to Our Lady, in a neighbourhood of refugees from Asia Minor. He attended church here and offered his services as catechist and preacher. He organized many pilgrimages to the saint’s cave, which demanded a great deal of effort, because the participants ascended on foot. This work, as well as his godly desire to make the monastery a reality, were the reasons why he didn’t attend university, even though he loved learning, was diligent and had a good brain.

Metropolitan Mihaïl ordained him to the diaconate on 21 February, 1941, giving him the name Nektarios. This pleased him greatly, because it had been the subject of a secret prayer which he hadn’t revealed to anyone. Then, on 8 November, he ordained him to the priesthood and thereafter made him an archimandrite and confessor. Between 1941-1945, he worked hard in the neighbourhood of his church, providing valuable services as priest, preacher, catechist, and charity worker. He organized a Sunday school for 80 girls, quite a number of whom became nuns under his guidance. He taught them the Jesus prayer, love for church attendance and the spiritual life. Young Evyenia, who is now the nun Patapia, remembers fondly the sermons the Elder preached over the course of a year and had as their subject: ‘Why are we Christians; why do we go to church; what should we do to be saved?’ She also remembers, with equal fondness, walking along to the cave with other girls, laden with clothes, water and food. She recalls: ‘We didn’t get tired because we felt we were borne upwards on the wings and love of Saint Patapios’… 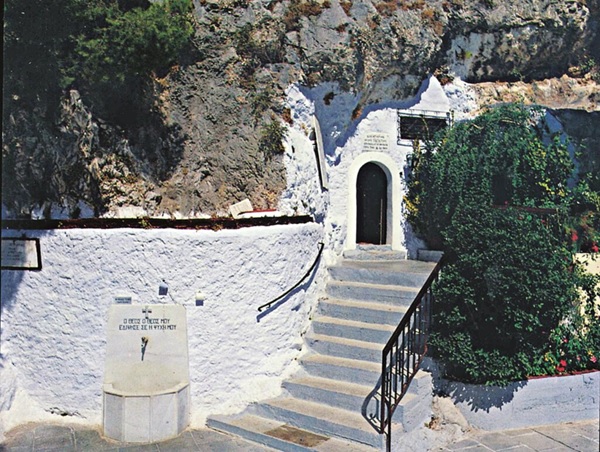 On 15 October 1945, Metropolitan Mihaïl went up to the cave with the young Deacon Nektarios and venerated the relics of the saint. He was deeply moved at the sight of the relics and composed a dismissal hymn, ‘The glory of Yeraneia…’, and a magnificat, ‘The crown and honour of Loutraki…’. He also promised to contribute to the task of Elder Nektarios, who through privations and considerable personal effort, had managed to build small guest quarters in 1947, three small cells in 1948 and a refectory in 1949. These were built on different levels of the side of the hill, with material brought by mules hired in Loutraki. A great deal of work and heavy expenditure. And the whole of the effort took place while the Elder was being attacked verbally and slandered. This was a co-ordinated attack by the devil, who saw souls being won for God and work on the foundation of the monastery progressing. In this task, he used the people of Loutraki, who were jealous of the project and hounded the Elder. The new Metropolitan, Prokopios (Tzavaras) from Tripoli, was influenced by these tactics, but over time was enlightened by the saint and promised to recognize the monastery. In 1952, approval was given for the first novice to move in – Eirini Steryiou from the Holy Monastery of Our Lady Faneromeni, Hiliomodio, Corinthia, and she was soon followed by the nun Styliani Goussopoulou, from the same monastery, as Abbess. On 19 September, 1953, a royal decree signed by King Pavlos II was published, acknowledging the foundation of the monastery. 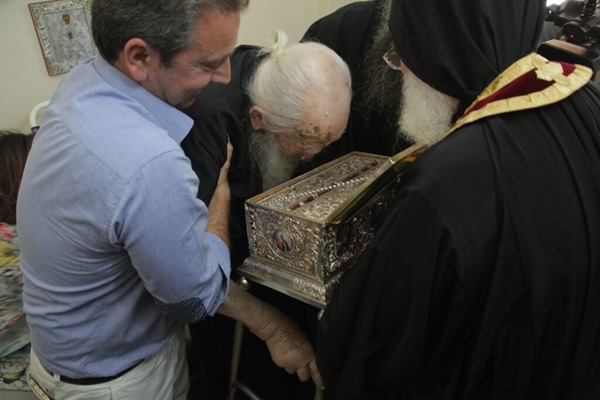 The late Elder Nektarios Marmarinos venerating the Holy Belt of the Mother of God on 30 June, 2019, during the recent visit of Elder Efraim Vatopaidinos to Corinth.

In 1977, Elder Nektarios founded Saint Paul’s men’s monastery in Yeraneia, and soon afterwards the men’s monasteries of Saint Nicholas the New of Vounena, in Perahora, Our Lady Myrtidiotissa, also in Perahora and Saint Nektarios in the Yeraneia Mountains.

After gathering a good number of nuns, and building and running workshops for church vestments, embroidery and icon-painting, he extended the social activities of the Monastery of Saint Patapios by founding ‘Saint Helen’s Old People’s Home’ which provides comfort to penniless elderly women.

He was awarded the keys to the Municipality of Corinth for missionary work. In 2006, the Holy Synod of the Church of Greece, chaired by Archbishop Christodoulos, awarded him a gold medal for his services to the Church. Despite his advanced age he continued to tour the whole of the province of Corinth, preaching the word of God and guiding his countless spiritual children- clergy, monastics and lay people. His important contribution as Dean for 60 years, from 3 October 1951, was characterized by his unshakeable faith, his continuous prayer, his love of services, his many and varied acts of charity, his construction activities and his sacrifices for the least of his fellow human beings.

We shall now quote one of the texts of Elder Nektarios to the nuns in his community, recorded by the late Sister Sofronia as ‘Admonishments to Nuns’.

‘In your everyday life, never forget the salvation of your soul. Since you live in a coenobium, you’re duty bound to behave in a manner pleasing to God, doing violence to yourself. 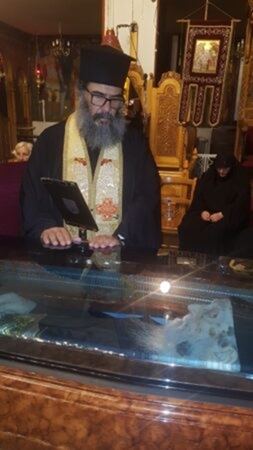 Fr. Dimitrios Kavvadias, author of the book ‘Elders and Women’s Monasticism’, celebrating a memorial service before the mortal remains of the late Elder.

Joking is inappropriate for monastics. “Those who talk repent frequently; those who don’t, never [need to]”, says Saint Efraim. You’re fortunate in that you’re free of all temptation and from the tempest of society. Don’t imagine you’ll find peace away from God and the haven of the monastery. Violence against your passions is held to be martyrdom by God. If you weep and are wounded over the fall of your sister, you gain a martyr’s crown. If one suffers, everyone else suffers and feeds with love the one in pain. If one sister falls, all the others share her pain and give her their love. Just as you’re careful to make sure that the divine pearl doesn’t fall when you’re taking Holy Communion, take the same care that your sister doesn’t fall, either, because she, too, is a member of the Lord. If you save a soul, you cover a multitude of sins. Like a lightning-conductor, humility attracts God’s love’.

The following nuns served as Abbess in the Monastery of Saint Patapios: