The Participation of Nature in Worship: the Blessing of the Fruits of the Vine

According to Saint Basil the Great, nothing exists without due cause, nothing’s fortuitous, everything has some secret and unexpressed wisdom. Thus, regarding plants and their fruits, apart from their ecological importance as producers of eco-systems they’re also schools for rational souls and colleges of the knowledge of God, which train the intellect and lead it from the visible and tangible to the contemplation of things invisible.

Plants form an important element in the worship of the Orthodox Church. During the Divine Liturgy, bread and wine are used, the products of grain and grape. During the service of the Blessing of the Loaves, grain, wine and oil are blessed. Besides, in accordance with liturgical practice the fruits of the earth, such as grapes and figs, are offered and blessed once they’re ripe. Indeed, in general, every action and task linked to the earth and its cultivation is accompanied either by thanksgiving to the Creator or by supplications that the tilling and harvesting should provide plenteous amounts of fine fruit. 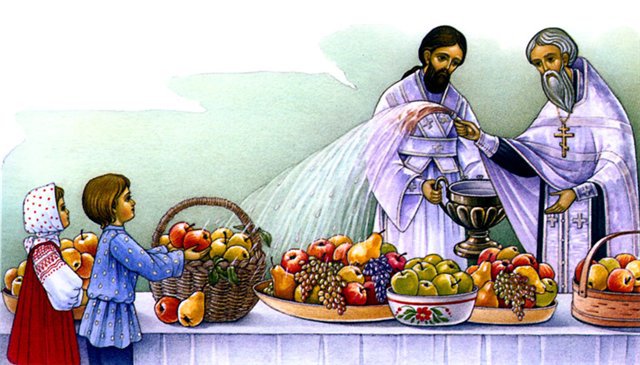 There was always a tradition in the Church that, when the bread and wine were being offered at the Eucharist, other produce and fruits of the earth could also be offered and blessed. But to preserve the tradition of offering only bread and wine at the sacrament of the Divine Eucharist the Church forbade the custom of presenting non-Eucharistic produce during the actual celebration of the Eucharist.

All that was allowed by the Church was the offering of grain and grapes, with the explanation that this offering took place at the time when fruits ripened and this was to be a blessing of the first-fruits and was by way of an expression of thanks to God for the abundance and fertility of the earth. From as early as the third century we have prayers for the first-fruits, thanksgiving to God Who had given them for the gladdening and nourishment of people. The first-fruits were brought to church as a pleasing and grateful gesture to Him.

As regards the blessing of the fruit of the vine we can see that this is an ancient tradition of the Church, for which there are two ceremonies in the Service Book of the Church of Constantinople and imperial ritual. Therefore according to ancient custom, the Church always blessed the harvest and the grapes. Indeed, a canon was introduced establishing that grain and bread be blessed before they were eaten at the beginning of the harvest. 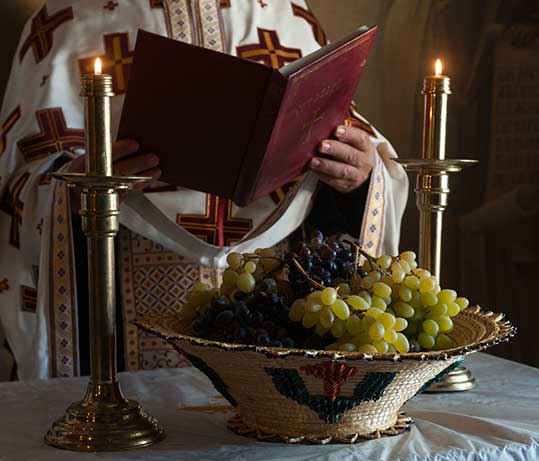 A continuation of this tradition is the blessing of the grapes at the feast of the Transfiguration of Christ the Saviour. We have a manuscript from the 10th century containing a prayer through which the Church thanks God Who was pleased to ensure that the fruit ripened, was harvested and brought gladness to people through its taste. Wine, a product of the grape, was also offered as a gift to be included in the celebration of the Divine Eucharist. There is also another, later, prayer which mentions the blessing of only the grapes, with a clear reference to the spiritual freedom guaranteed by Christ through the Eucharistic life.

It’s interesting that in certain liturgical rubrics, the blessing of the fruit of the vine takes place on the feast of Dormition of the Mother of God, after the Divine Liturgy. This was the case in Constantinople, where the Patriarch blessed the grapes on that day, in the church of Our Lady of Blachernae, in the presence of the Emperor. From other texts, it appears that the offering took pace at the feast of the Elevation of the Precious Cross. It is clear, then, that the time of the blessing of the fruit of the vine depended on the conditions prevailing in nature in each region and on the time at which they ripened.

If we wish to see the theological connection between the feast and the blessing of the fruit of the vine, our thoughts will inevitably turn to the parable of the vine, where Christ is presented as the true vine. With the blessing of the grapes, it is emphasized that people have a need of spiritual productivity and a transformational advancement towards sanctity, glorification by Grace, and communion with God. Moreover, Christ is the vine which has its roots in heaven and its branches on earth. The body- though not the root- was pruned and on the third day thereafter brought forth the fruit of the Resurrection. 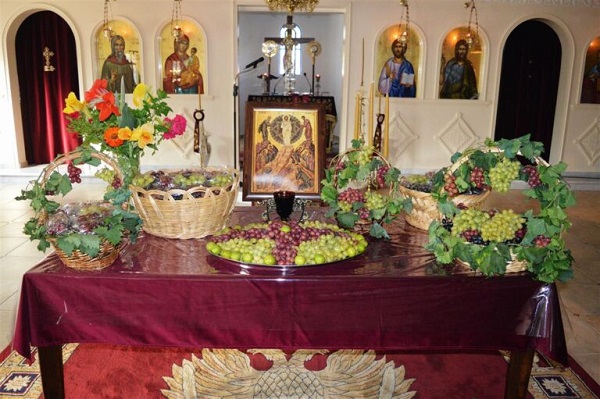 It follows, then, that, with the Lord’s Transfiguration, at which His glory was revealed, the world is illumined and glorified. Consequently, creation responds with glorification and gratitude to this gift and the Church continues to bless the world and it first-fruits. This blessing of the fruits emphasizes the creation’s offering of praise and gratitude to the Creator. Besides, the grape is the fruit that gives us wine, which we offer together with bread so that they become the Body and Blood of Christ. By partaking of these, we become one in body and blood with Christ.

We, as people, received the world, blessed and sanctified, from God’s hands. Between us and our environment there was harmony and co-operation. The Fall also brought about the decay of creation, since thereafter it followed the same path as we did. After our disobedience and estrangement from God we began abusing and exploiting creation. Nature rebelled numerous times against us and opposed us, with the result that instead of functioning constructively and positively towards us, it often became negative and destructive. We feel it threatens us. The turmoil in our relations with God has brought about disruption in our relations with His creation, nature.

As Christians, however, we should not see nature as being de-sanctified but should view it as the creation and gift of God. We should feel that, in the world, we’re within the creative love of God. We Christians feel the need to respond to this love, to take elements from the material world and to offer them to God. We bring bread and wine, representative elements of the material world, in thanks to God and, after their sanctification, they’re offered back to us as the Body and Blood of Christ. In this way, we acquire a foretaste of the world as it will be transfigured in Christ in the end times*.

* Indeed, as Georgios Manolis remarks, the feast of the Transfiguration is very much a foretaste of the end times. According to the Gospel of Saint Mark (chap. 9):
1. And he said to them, ‘Truly I tell you, some who are standing here will not taste death before they see that the kingdom of God has come in power’.
2. After six days Jesus took Peter, James and John with him and led them up a high mountain, where they were all alone. There he was transfigured before them.
The crux here is the words ‘in power’. Taken separately, the two words do mean ‘in’ and ‘power’. Together, however, they form a phrase which has to do with ‘potential’. Thus, in physics, ‘potential energy’ in Greek is ‘in power energy’. So a perfectly good translation would also be, ‘will not taste death until they have had a foretaste of the kingdom of God’- as happened six days later. [WJL]