The Cook in Paradise

The lack of simplicity, sincerity and authenticity in relations between people leads to social hypocrisy, meretricious morality and formality and, at the same time, provokes adverse reactions among younger people.

The problem is worse when there’s no simplicity even among so-called spiritual people. “When spiritual people don’t live simply, but are all straight-laced, they’re not helping young people”, the late Elder Païsios used to say.

And he went on: “When they see straight-laced Christians, hidebound people dressed up in ties, all from the same mould, they don’t see any difference between them and secular people and so they react… They become frustrated when spiritual people themselves and priests try to keep them in check with secular systems… People understand  if you hurt them or you’re pretending. A good-for-nothing’s better than a hypocritical Christian!” (With Pain and Love for Modern People, pp. 284-5).

The words of the wise Elder may seem exaggerated, but in fact, in the Gospels themselves, Christ didn’t pay much attention to people’s external image and formal religiosity, but was more interested in the state of their heart. From there proceed “evil thoughts, fornications, thefts, murders, adulteries, covetings, wickednesses, deceit” and so on (Mark, 7, 21-2).  This is why He berated the hypocrites, forgave and ate with publicans and harlots and directed those who wanted to become citizens of His kingdom to look to the simplicity of children. 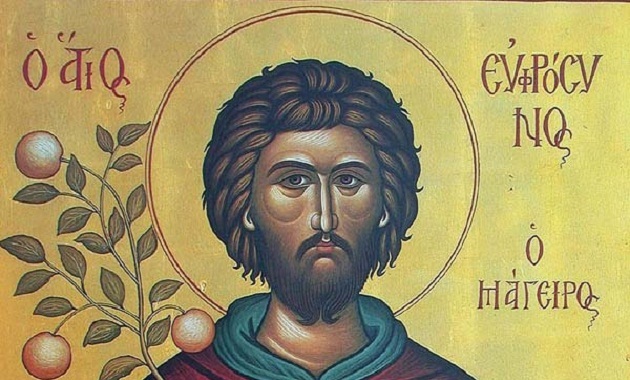 On 11 September, the Church honours Saint Euphrosynus the Cook. “He was born to uncultivated and rustic parents. Having been brought up unpolished and without education, he later entered a monastery. After he donned the monastic habit, he became a servant to the other monks. But since he often worked in the kitchen, being uncultured, he was looked down on by the other fathers and mocked”, writes the author of his Life.

“But the blessed man suffered all the revilements with boldness of heart and good sense, with his thoughts under control, and was not distressed at all. Because he may not have been skilled with words, but he certainly possessed depth of knowledge. As can readily be understood by the following story. There was also in the monastery where the late Euphrosynus lived, a priest, a friend of God who begged Him to show him the good things that those who loved Him would enjoy”.

The Life continues in a most moving way. The virtuous priest saw a vision in which he was in Paradise, in a garden with trees laden with fruit, fragrant blossoms and pellucid waters. Euphrosynus was there, enjoying the ineffable treasures. To the priest’s question of how he came to be there, he replied: “I’m illiterate, but I hear from you that the Apostle says that those who struggle see even in their present life the beauty of paradise”. Thereafter he gave the priest three apples, which, much to his surprise, the priest found in his habit when he came to himself.

The revelation to the brotherhood of the monastery of the spiritual stature of Euphrosynus, whom they had all looked down upon, made a great impression on all of them. But he wanted nothing to do with the praise of others and slipped out of the monastery, never to return. No doubt he made his permanent home in the mental and spiritual Paradise where the light of the face of Christ holds sway. But his Life has survived in order to teach us the magnificence of Christian simplicity and to confirm the words of the Gospel which says: “But many that are first shall be last, and first that are last” (Matth. 19, 30).