Millennialists and the Precious Cross of the Lord

With his characteristic clarity, Saint John the Damascan declares that: ‘Every act and miraculous enterprise of Christ is mighty, and divine and wonderful, but the most wonderful of all is His Precious Cross’ (Exact Exposition of the Orthodox Faith 4, 11, PG, 94, 1128D). And Fotios the Great adds: ‘Christ’s Cross is a trophy raised against the devil; and is the most glorious of all trophies’ (Amfilochia, Question 24, 9, PG 101, 185 D).

But the enemies of Christ’s Cross are opposed to the teaching of practice of our Church, which is under the guidance of the Holy Spirit (Phil. 3, 18). These enemies include the ‘Jehovah’s Witnesses’. There is no heresy in the world that displays such demonic contempt and revulsion for the Precious and Life-giving Cross as do the ‘Jehovah’s Witnesses’. In their publications, in the most arbitrary, baseless and deceptive manner, they deny the nature and the traditional form of the Precious Cross and depict it as a perpendicular pole on which Christ was hanged. Referring to the Cross, they call it a ‘stake’ or ‘tree of torture’ or ‘tree of execution’. 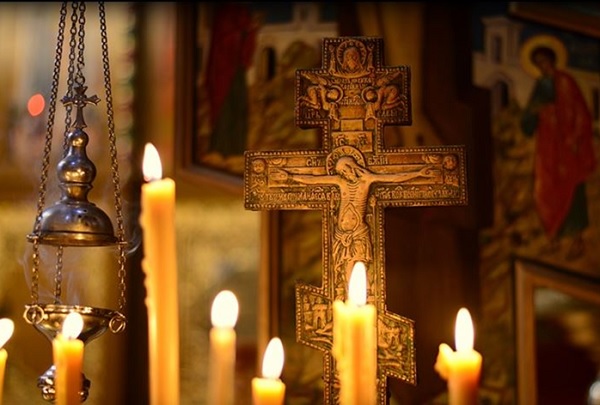 Indeed, such is their aversion that they don’t hesitate to replace the word ‘Cross’ with the expression ‘tree of torture and the verb ‘to crucify; with ‘to hang’ in the New World translation of Scripture created by the ‘Watchtower’ corporation. It should be noted that this New World translation is literally the worst and most blatant corruption of the text of Scripture which has ever existed in the history of the world.

Moreover, for the Millennialists, the use of the Cross in worship is considered to be idolatry. These Millennial delusions belong to the spiritual nourishment provided by Jehovah exclusively through His visible organization, the ‘Watchtower’ to worshippers through the distribution of the publications of the public corporation of the same name. But the older history, practice and teaching of the ‘Watchtower’ is irrefutable evidence that, in the case of the Cross, too, the Millennialist corporation, lies, misinforms and occasioanlly changes its teachings. This can be shown with exceptional clarity by the fact that the precious Cross, in its historical, traditional form, within a crown, was a recognition sign for the Millennialists until 1931 and could be found on the cover of the ‘Watchtower’ magazine (See Protopresbyter Antonios Alevizopoulou ‘Jehovah’s Witnesses’ and Orthodoxy’ vol. III, Athens 1995, pp. 102-103. In Greek).

Moreover, the contradiction, misinformation and change in position of the ‘Watchtower’ is demonstrated by the book written by Joseph Rutherford (1869-1942), the second president of the corporation and succcessor to Charles Taze Russell. This book is called ‘The Harp of God’ (1925). In this Millenniaist book there’s a depiction of Christ crucified in the traditional manner [at the beginning of chapter VI, ‘The Ransom’. WJL].

In the same book, Rutherford states:
‘The ransom price was provided at the cross. The cross of Christ is the great pivotal truth of the divine arrangement from which radiate the hopes of men. When all men come to a knowledge of this fact and all the obedient ones have profited by the value of the ransom-sacrifice, there will be great rejoicing among the human race (…) Then all can truly sing:

“ In the cross of Christ I glorify
Tow’ring o’er the wrecks of time;
All the light of sacred story
Gathers round its head sublime”’. (243)

The facts speak for themselves. Comment is superfluous. But after such contradictions and falsehoods it’s easier to understand the comments of a former Millennialist, when he says: ‘The ‘Watchtower’ corporation strictly forbids its members to take part in any Biblical discussion and any investigation into its teachings. Those who dare to depart from this principle are mercilessly persecuted, are stigmatized as rebels and mortal hatred is stirred up against them’ (See E. Antoniadis Διαψεύδονται οι προφητείες των Μαρτύρων του Ιεχωβά 1984, p. 8).

The history of the ‘Watchtower’ corporation is the clearest and most irrefutable condemnation of its raison d’etre.