The Responsibility of Love – 11th Sunday of Matthew

One of the features of our society is a sense of lawlessness. It’s a belief common to all that certain people get treated in a preferential way, that, while laws exists, they aren’t applied- or at least not equally- to everybody. At the same time it’s seen as ‘reasonable’, only to be expected in practice, for us to exploit whatever ‘opportunities’ we’re presented with in order to gain some benefit by any means available, even if it’s illegal or immoral. Meanwhile, people talk about morality all the time, in a condemnatory way, purely and simply to put the blame on other people and to avoid criticism or the consequences of their own actions. The most common excused offered is: ‘Well, everybody else does the same’. In other words, while we rail against injustice on a theoretical level, especially when we ourselves are subjected to it, in the end, we accept it and justify it when it’s in our interest to do so, probably because we compromise with it, having first jettisoned our sense of morality. 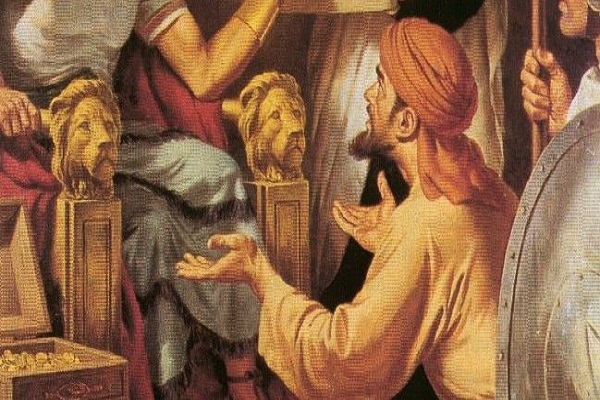 However that may be, since we remember slights to ourselves, while conveniently forgetting that we can also be unfair to others, the taste of injustice is forever on the lips of all of us, which is why we’re often overcome with uncontrollable anger, an outburst of condemnation, blind payback, with either unacceptable words or actions against other people, usually those who are as innocent as we are and subject to the same fate. Having first started with the premise that society is in decline, it’s easy to say that all this doesn’t simply eat away at society, but actually destroys it. What’s difficult is to define what it is that’s to blame, and so we feed our hostile anger, which becomes the most obvious feature of our everyday life.

Claiming what we’re owed
Today, Christ speaks to us in a parable through which He wants to define the reality of human relations and to show the way which is both desirable and beneficial for us to follow. A servant came across a fellow-servant, to whom he’d lent a very small sum, but which he’d not yet been able to reclaim. He rushed at him and nearly strangled him in his efforts to get back the small amount of money he’d lent. Despite the distress of the borrower, who begged him on bended knee for a little more time to repay, the servant who had made the loan had his debtor dragged away and locked up in prison. You might say that this behaviour on the part of the servant who lent towards the servant who borrowed was perfectly legal and reasonable. In the final analysis, according to the prevailing economic principle world-wide: ‘Agreements have to be kept’.

On the basis of this four-square logic, it’s entirely natural to claim what’s been agreed and to insist on the implementation of contracts, principally because it’s the responsibility of each of the parties involved to look exclusively to their own interests and to defend and protect them, given that the position of the other party is always considered to be rigid and inflexible. In other words, if someone suffers as the result of an agreement which is not being honoured, it’s his or her own fault, since they should have had the sense either not to agree to the terms in question or to have ensured that the terms would be met. This thinking lies at the very heart of ‘capitalist morality’, which is an extension of the Protestant ethic.

God’s blessings
What is it that the lender servant forgot? What is it that makes his behaviour towards his fellow servant unacceptable? The fact that immediately before this, not another servant but his lord and master had forgiven him an unbelievable amount that he owed and which he’d never have been able to repay, even if he’d sold all his possessions, the members of his family and even himself. And in fact, his master forgave the debt because the servant who owed it had entreated him to do so.

In other words, Jesus comes and reminds of the countless blessings from our Holy God towards us. These are rich blessings, given to us without our deserving them, since we’ve disappointed God so bitterly. We were in debt to such an extent that nothing could act as a counter-weight to our sinful apostasy or give us any hope of salvation. And yet the Creator didn’t become enraged with His creation. If creators- painters, poets, artists, composers, sculptors or writers- don’t like what they’ve created, when it doesn’t meet their expectations, when it’s failed, they have the right to destroy it and start something else. God didn’t do this, though, when His creation didn’t meet His expectations and when it rose up and made war against Him. He sent His Only-Begotten Son and Word, so that, through His incarnation, He could refashion the human race, not simply granting forgiveness of sins but bestowing something very much greater: sanctification, deification, eternal restoration in the kingdom of heaven.

If we’re indebted to such divine love, aren’t we also accountable and responsible for the way we enjoy and run our lives? And if, while we’re worthy of the worst punishments, we actually enjoy the greatest blessings, by what right do we not imitate God our Father even to the slightest degree, by copying, with droplets of love, the torrential outpouring of love from His heart? By what right, when we’ve scandalously benefited from the logic of love, do we forget this and confront others with the logic of revenge?