‘And when the Lord saw her, he had compassion on her’
Teachers of little children train them in accordance with a system, whereby they attempt to teach them the subject of the lesson by beginning with the easiest aspect and then proceeding to the more difficult ones. This is also what the Lord did with His disciples: first He cured ordinary ailments, then He expelled demons from people’s souls, then he opened the eyes of the blind, then He restored to health those we were close to death and, finally, He raised the dead, as in the case of Jairus’ daughter and the son of the widow of Nain, as described in today’s Gospel reading. According to Theofanis Keramevs, the Lord raised the dead in order to pave the way for the teaching of His own resurrection and that of all people in general. Let’s examine some of the facets of the resurrection of the widow’s son. 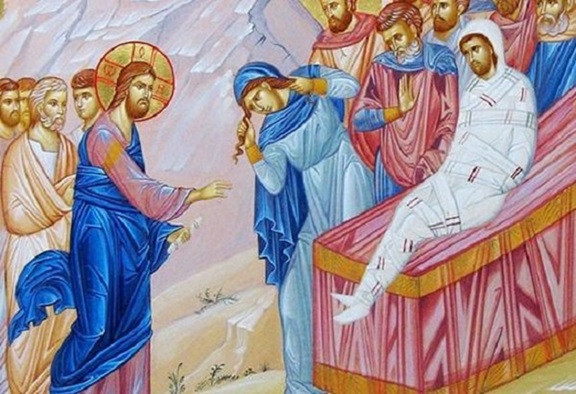 Christ’s Compassion and Love
If we look closely at the Gospel reading, we’ll see that the whole town shared in the widow’s grief: ‘and a large crowd was with her’ (Luke 7, 12). Efthymios Zigavinos writes that they shared her pain, because she had not only lost her husband, but also her son, her only child. If other people shared her pain and comforted her with their presence, how much more so did the Lord, Who is the source of comfort and goodness. Christ demonstrated His compassion to the unfortunate woman in a variety of ways. He didn’t require her to declare her faith in His august personage, nor did He bargain with her in any way. He didn’t even pray but simply raised the boy by His command.

The Lord came unbidden ‘to this great miracle of resurrection’ observes Saint Gregory Palamas, not merely in order to demonstrate His life-giving power, but ‘also His goodness and incomparable compassion’. The Lord, Who was calmer than anyone in the face of death, felt compassion for the widow.

‘To feel compassion’ means ‘to be deeply moved, to the extent that your inner emotions are stirred’. As God and human, Jesus was moved at the sight of the young man’s funeral. How comforting were the words He spoke: ‘Don’t cry’ (7, 13). The woman felt consoled by His strength. A spark of hope was struck in her soul when God visited her heart. Also indicative is the action He took after He’d raised the young man: He took him by the hand, to show that He’s the Lord of life and death, and gently gave him to his mother (7, 15). The Lord’s touch is life-giving. A bishop wrote that God expresses Himself as all-good and all-powerful. God loves, and because He can, He expresses His love through His power. Alexander Schmemann says that divine power isn’t a power in itself, but is the power of love, or rather that love is power. Besides, it was through love and compassion for the human race that God became human and was crucified. He died that we might live.

Christ’s Touch
In the Philokalia, there’s mention of a discourse by one of the niptic fathers. In it, he says that if someone comes into contact with us and bumps into us, we recognize their existence from their touch and the collision. So imagine what happens when we come into contact with God. We’ll certainly feel His presence. We’ll be aware of His compassion. Partaking of the body and blood of Christ gives us this opportunity. We recognize God’s presence within us. We’re aware of His union with us. Many of the saints of the Church actually felt the presence of God at the sacrament of the Divine Eucharist.

They felt they were united with the body and blood of Christ. In the vale of tears and misery in which we live, our only hope is Christ’s unconditional love and compassion. This is what we should seek. We should accept the touch and presence of the Lord so that we may cast off the threat of death and may live eternally in the kingdom of God.