Concerning God: that He is Incomprehensible

Let us continue with our study of the word of God from the book by Saint John Damaskinos Exact Exposition of the Orthodox Faith. In the previous chapter, the saint told us that God exists. This is obvious. But what is God, in His essence and nature? This is entirely beyond our comprehension and knowledge. Besides, the deity is incorporeal, He doesn’t have a body. This, too, is abundantly clear, because God is infinite, that is, He has neither bounds nor form. So He can’t have a body. Moreover, the Deity is incorporeal, because He cannot be touched, and is also invisible and not composed of different elements. ‘He is simple, not compound’, says Damaskinos. We can’t lay hands on Him and say ‘There He is!’.

But if God were circumscribed and subject to passion- which would be the case if He had a body- He could not be ‘holy’, we couldn’t venerate Him as God. God is ‘passionless’. But how could He be if He were ‘composite’, that is, made up of elements to which He would revert on dissolution? This is why we say that God is simple. Besides, as Damaskinos says combination is conflict, because different things are combined. These are later separated. But we can’t talk of conflict and dissolution with regard to God. 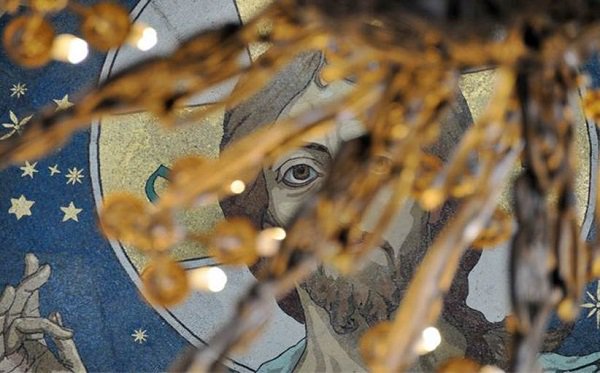 Moreover, if we say of God that He has a body and is visible and touchable, how can we understand that He permeates everything and fills all things with His presence? This is what God says of Himself in Holy Scripture: ‘Do I not fill heaven and earth?’ (Jer. 23, 24). It’s impossible for a body to permeate other bodies without dividing and being divided and uniting and commingling with them, in the same way that liquids do.

But there are some who say that God does, indeed, have a body, just that it’s not like ours. It’s some sort of ‘immaterial’ body, such as the one that Greek philosophers called the ‘fifth body’. But that, too, is impossible for God, since this body would also be subject to motion, like the heavens (which is what they meant by the ‘fifth body’). In that case, who is it that moves it? After all, everything that moves is moved by something else. And who moves that? Eventually we end up with God, Who, however, must be immovable, because that [ultimate mover] which moves all other things must itself be immovable. It’s impossible, therefore, for God to have a body, even an immaterial one, because that would be just as moveable as any other. So we must conclude that God is incorporeal.

We don’t know what God is. We can say about Him that He’s unbegotten, without beginning, changeless, imperishable and so on, but this doesn’t tell us what He is, only what He isn’t. If we want to declare what the essence of something is, we have to say clearly what it is, not what it isn’t. The latter is called ‘apophatism’ [the ‘via negativa’ or ‘negative way’]. That is, it’s a way of describing something by saying what it isn’t rather than what it is. It’s ‘apophatic’ then to say of God that He’s ‘motionless’, because motion is characteristic of created things.

So it’s impossible to describe God in His essence. But we could talk about God in general terms in the sense that He’s separate from all things. We can say that He isn’t one of the existing beings, not because He doesn’t exist but because He’s beyond all beings. What we know is confined to created beings. God is beyond knowledge because He’s beyond the essence of created reality. Conversely, what is beyond essence must, necessarily, be beyond knowledge.

In conclusion, then, we can say that God is infinite and incomprehensible. Indeed, the only thing that’s comprehensible about Him is precisely His infinity and incomprehensibility. Whatever we say positively about God doesn’t indicate His nature, only the qualities of this nature. There are some things we affirm about Him, which are, in fact, negative! Thus, we say that God is darkness, but only in the sense that He isn’t light. He’s not light because He’s above light. We simply say that He’s light because He’s not darkness!