‘Do not Fear; only Believe and you will be Saved’

In today’s Gospel reading, Saint Luke the Evangelist mentions two miracles performed by Our Lord Jesus Christ: the one is the healing of the woman with an issue of blood; the second- even more astonishing- is the resurrection of Jairus’ daughter. Two separate cases, two separate cures. In one, a man who was a leader had no hesitation in setting aside his position, abandoning his office, in order to humble himself before Christ and other people by falling to his knees and begging for a miracle. In the other, a woman of the people who hesitated even to approach Christ, but had deep faith that, if she could but touch Him, she’d experience a miracle.

Weighed down by the cross of worry over the life of his daughter, the ruler of the synagogue, Jairus, approached Christ. The girl’s death was sudden and untimely. This is why it plunged his family into deep mourning and in Capernaum ‘they were all weeping and wailing over her’. It’s a fact that the burden of our cross is no impediment to our approaching God Crucified. We often seek some support, some Simon from Cyrene from among other people, forgetting God, Who was first to ascend Golgotha and be voluntarily crucified. In this way, He became the companion of all those who are bearing a cross. Jairus anxiously knelt before Christ and asked Him for a favor: would Jesus go to his house and heal his sick child, who was on the point of death. Christ agreed to Jairus’ request, but before He reached the house in question, another event unfolded before Him. 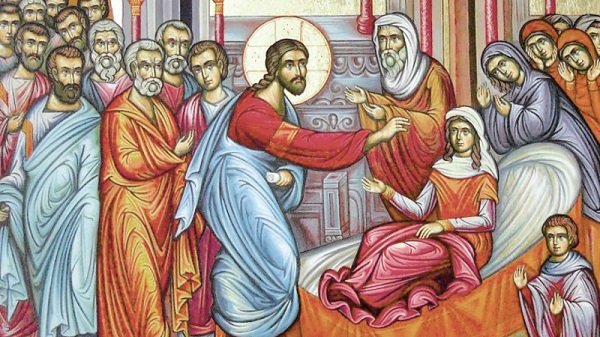 A sick woman who’d been suffering for twelve years on end from an issue of blood approached Jesus and, without His knowledge, stretched out her hand and touched the hem of His outer garment. Saint Luke tells us that she was healed at once. Christ realized what had happened, however, and said that He’d felt someone touch Him, because He’d felt power [1] leaving Him. Then the woman who’d been healed appeared in front of Christ, Who presented her to the crowd in order to demonstrate her great faith, patience and above all, her reverence for Him.

We see that, although in the case of Jairus and his wife He charged them not to say anything about the event, in the instance of the hemorrhaging woman it was announced before all the people. We can discern a contrast between the two miracles, behind which lies the all-embracing wisdom and love of the Lord.

Sickness and death still exist today in our lives, and will continue to do so until Christ’s Second Coming. Progress in science and technology has not succeeded in ridding us of these two calamities, because they’re inextricably interwoven with our fallen nature. But for us, there’s also Christ, Who trampled down death by His own death: ‘God of spirits and all flesh, Who has trampled down death’ [2]. If we trust Him and take our burdens to Him, then we emerge victorious from our sorrows and difficult circumstances. But if this is to happen, proper preparation is needed, that is, humility, repentance, confession and Holy Communion.

When we talk of death in the case of Jairus’ daughter, we say that it’s natural. But death doesn’t actually derive from our nature. God made and created us to be eternal and immortal. Death entered our existence through the envy of the devil, with the fall of Adam and Eve: ‘deceived by the envy of the devil’ [3]. So death became our enemy, according to the words of Saint Paul [4]. With the incarnation of the second person of the Holy Trinity, Jesus Christ Our Lord, death took on a new form. According to the most learned Isidoros Pilousiotis (Isodore of Pelusium) ‘the time for making the effort has passed and the time for the prize-giving has arrived’ [5]. The roles have been reversed. ‘Before your Cross, death was terrible for us; since your glorious passion, we are terrible for death’ [6].

The basis of both miracles is faith. Faith is the necessary requirement for us to share in a miracle and therefore in the Kingdom of God. Faith is the human force that activates God’s protective energy. God asks for our faith so that He can act. We show our faith by laying our freedom at the feet of God. Faith is the trigger for Jesus’ miraculous intervention. Alas, today, lack of faith has increased to a very marked degree. This is why, in our prayers, we need to ask God to supply us with greater faith, to make us more fervent as His disciples, real Christians, not merely apparently so, just for show. ‘Do not fear; only believe’. Let’s bear this in mind and apply it to our lives. Amen.

[1] Translated as ‘virtue’ in King James, because the Latin Vulgate has ‘virtutem’ here. The original sense of the word in Latin was, indeed, ‘vigor, manliness, power’ but by the 12th century it had already come to mean, in English, ‘a particular moral excellence’. More modern translations are mostly from the Greek and therefore more accurate than King James [WJL].
[2] Prayer at the Funeral Service.
[3] Hymn at the Funeral Service.
[4] 1 Corinthians 15, 26.
[5] PG 78, Επιστολών Βιβλίο Γ΄, ΙΒ΄ Θεοκτίστω [To Theoktistos], 737Α.
[6] Doxastiko at Vespers on 27 September.