Saint Sophrony of Essex: the Theologian of the Hypostatic Principle is now in the Choir of Saints of the Church

Ecumenical Patriarch Bartholomew left to the end his final surprise, bringing the joy of the resurrection: the announcement  of a fifth new saint which the Mother Church of Constantinople has elevated to the ranks of God’s chosen. This is Elder, now Saint Sophrony (Sacharov), founder and builder of the Holy and Stavropegic Monastery of the Honorable Forerunner in Essex.

Short Biography of the Saint

Saint Sophrony (Sacharov), was born in 1896 in Moscow. He studied at the State School of Fine Arts and devoted himself to painting. After a short period when he studied at the Saint Sergius Theological Institute (Saint Serge) in Paris, he left in 1925 to go to the Holy Mountain, where he settled in the Holy Monastery of Saint Panteleimon. There he met and became closely associated with Saint Silouan. The relationship between Elder Sophrony and Saint Silouan was fundamental to the course of his spiritual life. He stayed with the saint until the latter’s death and then, with the blessing of the Abbot and Elders of the monastery withdrew into the desert of the Holy Mountain. From there he served as spiritual father to the monasteries of Ayiou Pavlou, Grigoriou, Simonos Petras and Xenofontos, as well as to many kellia and sketes. In 1948, he published in France the manuscripts left to him by Saint Silouan, attaching a lengthy analysis of the saint’s teaching and some biographical details. As of 1959 he settled in the Holy Patriarchal and Stavropegic Monastery of the Honorable Forerunner, Essex, of which he was the founder, builder and spiritual father. He fell asleep in the Lord on 11 July 1993. His writings were originally in Russian but have been translated into English, Arabic, French, German, Italian, Serbian, Swedish, Flemish and Spanish, with extracts translated into many other languages. 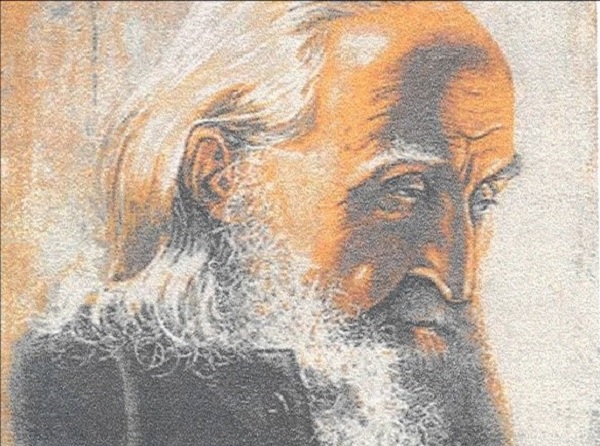 Archimandrite Zacharias on the last days of Saint Sophrony’s life

Four days before he died, he closed his eyes, and would not speak to us any more. His face was luminous and not pathetic, but full of tension; he had the same expression as when he would celebrate the Liturgy. Not all of us went in to see him, only Fr. Kyrill, myself, Fr. Nicholas and Fr. Seraphim. Two or three weeks before he died, he invited all the brethren, one by one, to go and sit with him for about an hour in his kitchen, for their last conversation with him. But the four of us had the key to his door, and would go to see him every few hours. We would go in and say, “Blagoslovitye, Otche“, “Your blessing, Father.” He would not open his eyes or utter a word, but he would lift up his hand, blessing us. He blessed us without words, and I understood that he was going. So, myself, I did not want to detain him. Before I used to pray that God extend his old age, as we say in the Liturgy of St. Basil the Great: “to geras perikrateson”‘, “succour the aged.”.  But during those days I saw that he was going, and so I began to say, “Lord, grant unto Thy servant a rich entrance into Thy kingdom.” I prayed using the words of St. Peter, as we read in his second epistle (cf. 2 Pet. 1:11). So, I was constantly saying, “O God, grant a rich entrance to Thy servant, and place his soul together with his Fathers,” and I named all his fellow ascetics that I knew he had on the Holy Mountain, starting with St. Silouan, and then all the others.

The last day, I went to see him at six o’clock in the morning. It was a Sunday, and I was celebrating the early Liturgy, while Fr. Kyrill together with the other priests were to celebrate the second. (For practical purposes, on Sundays we have two liturgies at our monastery.) I realized that he was going to leave us that day. I went and started the Prothesis; the Hours began at seven o’clock, then the Liturgy followed. During the Liturgy, I said only the prayers of the Anaphora, because in our monastery we have the habit of reading them aloud; for the rest, my prayer was continually, “Lord, grant a rich entrance into Thy kingdom to Thy servant.” That Liturgy was really different from all the others. The moment I said: “the Holy things unto the Holy”, Fr. Kyrill entered the Altar. We looked at each other, he began to sob, and I realized that Fr. Sophrony had gone. Asking what time he departed, I knew that it was the time I was reading the Gospel. I went aside, because Fr. Kyrill wanted to speak with me, and he told me, “Take Communion, give Communion to the faithful, and then announce the departure of Fr. Sophrony and serve the first Trisagion; and I will do the same in the second Liturgy.” So I parcelled the Lamb, I partook; I gave to the faithful, and I finished the Liturgy. (I don’t know how I managed.) Then I came out and I said to the people, “My dear brethren, Christ our God is the sign of God for all the generations of this age, because in His word we find salvation and the solution of every human problem. But the saints of God are also a sign for their generation. Such a Father God gave us in the oerson of Fr. Sophrony. In his word we found the solution to our problems. And now we must do as the Liturgy teaches us, that is, “to give thanks” and “to make entreaty”, “to supplicate”. Therefore, let us give thanks to God who has given us such a Father, and let us pray for the repose of his soul. Blessed is our God . . .”, and I began the Trisagion. 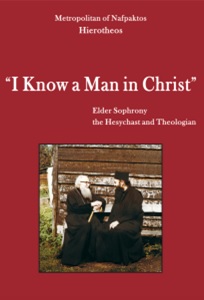 We put him in the Church for four days, because the Crypt was not yet finished and the tomb was not yet built. We left him uncovered in the Church for four days, and we were continually reading the Holy Gospels, from beginning to end, again and again, as is the custom for a priest. We read the Holy Gospels, and we read the Trisagia and other prayers; we had the services, the Liturgy, and he was there, in the middle of the Church for four days. (It was really like Pascha, such a beautiful and blessed atmosphere!) No one showed any hysteria. Everybody prayed with inspiration. I had a friend, an Archimandrite, who used to come to the monastery every year and spend a few weeks during summer time: Fr. Hierotheos Vlachos, who wrote, A Night in the Desert of the Holy Mountain. He is a Metropolitan now. He came as soon as he heard that Fr. Sophrony had died. He felt the atmosphere, and said to me, “If Fr. Sophrony is not a saint, then there are no saints!” We happened to have some monks from the Holy Mountain who came to see Fr. Sophrony, but they did not find him alive. Fr. Tychon from Simonos Petras was one of them.

Every time the Greeks came to England for medical purposes, they had the habit of coming to the monastery to be read a prayer by Fr. Sophrony, because many were healed. They all relate such things. Two of them, out of gratitude, even built a Church in Greece, dedicated to St. Silouan. The second or the third day after Fr. Sophrony’s death, a family came with a thirteen year old child. He had a brain tumour, and his operation was due the next day. Fr. Tychon, from Simonopetra, came to me, and said, “These people are very sad, they came and did not find Fr. Sophrony. Why don’t you read some prayers for the child?” I said to him, “Let us go together. Come and be my reader. We will read some prayers in the other Chapel.” We went and read the prayers for the child, and at the end Fr. Tychon said, “You know, why don’t you make the child go under the coffin of Fr. Sophrony? He will be healed. We are wasting our time reading prayers.” I told him that I could not do that, because the people would say that he has only just died and we are already trying to promote his canonization, “So, you do it!” I said to him, “You are an Athonite monk; nobody can say anything.” He took the child by the hand, and made him pass under the coffin. The next day they operated on the child and found nothing. They closed his skull and said, “Wrong diagnosis. It was probably an inflammation.” It happened that the child was accompanied by a doctor from Greece, who had the X-ray plate, showing the tumour, and who told them, “We know very well what this ‘wrong diagnosis’ means.” The next week, the whole family of that child, who were from Thessalonica, came to the monastery to give thanks at the tomb of Fr. Sophrony. The child has grown, he is twenty-one years old now, and he is very well.