Saint Tabitha: the Charitable Daughter of the Early Church

Love and charity are synonymous with Christianity. The basis of the Christian message is love towards all other people, regardless of who they are. Nothing should be an impediment to the exercise of Christian love: not sex, race or socio-economic status. Our Lord Jesus Christ Himself not only taught love towards others, but also made it a condition for those who want to belong to Him: ‘I give you a new commandment, that you should love one another. As I have loved you, so shall you love one another. In this, everyone will know that you are my disciples, if you love one another’ (Jn. 13, 34-35). He Himself also gave an example of serving others when He washed His disciples’ feet before the Last Supper and advised them: ‘Now that I, your Lord and Teacher, have washed your feet, you also should wash one another’s feet. I have set you an example that you should do as I have done for you’(Jn. 13, 13-15). And this love should extend to our enemies, as well: ‘Love your enemies, do good to them, and lend to them without expecting any return’ (Luke 6, 35). 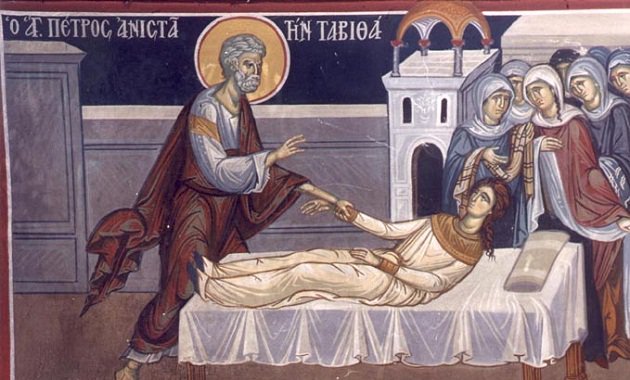 Our holy Church has been putting Christ’s commandment of love into practice for two thousand years now, generously providing charity to people. Outstanding personalities within the Church have, in their day, demonstrated their love and stamped their activities on history. One such was Saint Tabitha (Dorkas/‘gazelle’), who lived at the time of the Apostles and proved to be an example of charity and service to those in need.

Saint Luke mentions Tabitha in the Acts of the Apostles: ‘She was devoted to good works and acts of charity’ (9, 36). She lived in the Palestinian town of Joppa, where she was a weaver by trade. She’d become a Christian and lived out her faith in her everyday life. Her heart overflowed with innocent love for those of her fellow-citizens who were in pain or poverty. For this reason she worked day and night making clothing which she then sold, giving the proceeds to those in need. At the same time, she was flanked by the Christians in the town, who also engaged in impressive charitable activity. A whole host of hungry people, widows and orphans, were grateful objects of Saint Tabitha’s love and charity. But God allowed her to undergo a harsh trial, so that His name would be glorified and that she would be recognized as a saint. She suddenly fell ill and died.

At that time, Saint Peter was visiting the region. He was teaching in the nearby town of Lydda when he was told about the tragic event by two men sent by the faithful in Joppa. Peter at once set off for the town, where everything was prepared for Tabitha’s funeral. He found a large crowd inside and outside her house, mourning the loss of such a fine lady. Those who had benefitted from her charity wept inconsolably, because they’d lost their support. 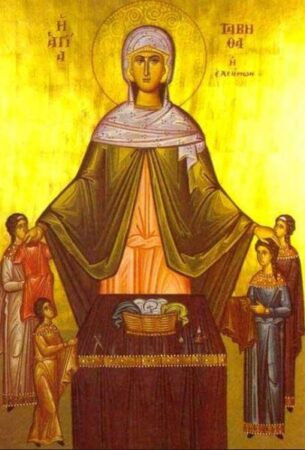 As soon as Peter arrived he asked to see the dead woman, in the upper room. After asking to be left alone with Tabitha’s honorable corpse, he knelt and prayed fervently. Then he said aloud: ‘Tabitha, get up now’. What a miracle! Her spirit returned to her body and she arose. This miraculous event not only filled those present with joy, but it was relayed throughout Palestine. As a result God’s name was glorified and many Jews and pagans turned to Christianity.

Thereafter, Saint Tabitha lived a good many years, continuing with her charitable works before dying at an advanced age. The Church numbered her among the saints and she’s commemorated on October 25.

We need to bear in mind the enduring charitable work of the Church, which flows naturally from our belief that Christ is depicted in the face of each person and that, according to His assertion; ‘Indeed, I tell you that inasmuch as you did so to one of the least of my brethren, you did so to me’ (Matth. 25, 40). We should also take note of the fact that charity was exclusive to Christianity, because the notion was unheard of in the pre-Christian world. There’s no evidence of any organized charity network or philanthropic institutions. From the huge amount of wealth at the shrines of the pagan religion, such as Delphi, for example, not the smallest amount was ever spent to relieve people in pain. There’s absolutely no evidence of this. In fact, when Julian the Apostate, in the 4th century, wanted to resurrect paganism, he asked the pagan priests to imitate the Christians in their performance of works of charity because the practice was not one they engaged in.

The history of our Church is full of immeasurable works of charity performed over the centuries. With self-denial, thousands of imitators of Saint Tabitha have generously offered their services and their goods to people in need, especially when times have been hard. And, indeed, today, when, in Greece, for example, people are undergoing real economic difficulties, caused by human greed, the Church is feeding and caring for a whole host of fellow-citizens who have been abandoned by both the official State and the various other ‘humane’ institutions. It is doing so through the love shown by volunteers, the thousands of imitators of Saint Tabitha.