The Healing, near Gadara, of the Man Possessed

Today’s Gospel tells us that, when Jesus reached land, He met a man from the city who had long had demons within him. The man had no clothes on and didn’t live in a house, but among the tombs. It says that ‘He reached the land’ to show that He’d arrived by ship, since the storm had subsided and the sea had become calm, at His rebuke. When He’d left Galilee by ship with His disciples, as the Evangelist tells us earlier, He’d indicated He wanted to go to the opposite shore. It’s clear from this that He’d foreseen what would happen and had gone as unbidden help to the man who’d been tormented so harshly and for so many years by the demons. Luke talks about one man with many demons, but Mark, who also talks about a single man, said that the latter had an ‘unclean spirit’. Matthew, on the other hand, declares that there were two men and that they were tormented by many demons.

The reason why the Evangelists talk of one or more men and demons is revealed by both Luke and Mark. Because when the demon referred to by Mark as ‘one’ is examined later by the Lord, it replies: ‘My name is legion, for we are many’. Indeed, a legion is a host, numerous ranks of angels or people, who stand, maneuver and aim at moving towards a particular task and goal. This was why these possessed people were kept together in the hills and tombs and were tormented as one: because they were all being manipulated and commanded by the same troops. This is the reason why both the people and the evil spirits tormenting them are sometimes called one and sometimes many. 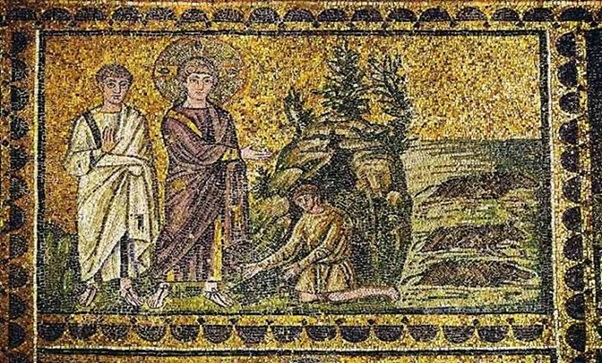 And the ‘legion’ didn’t simply recognize Jesus through this man, but ‘fell at his feet and in a loud voice cried: “What have you to do with me, Jesus, Son of the God Most High? I beg you, do not torment me”, because the Lord had commanded the demon to come out of the man’. Having sailed there for this purpose, the Lord, out of compassion, there at the coast, commanded the demon to depart, but didn’t say where it was to go. This meant that the vile squadron of evil spirits was overcome with confusion, afraid that He might now consign them to their future punishment, the fires of Gehenna already prepared for them. There they would be totally immobilized, since all action on their part would be constrained. They were forced to approach therefore, to fall down before Him, using more humble and truthful words, bearing witness that He is the Son of the Most High. In their cunning they imagined that through this confession, as if it were flattery, they’d be able to make the Lord of all change His mind.

The Lord tolerated the testimony of the demons for the instruction of those who were on the ship. Because shortly before, when these people had seen His mighty miracles on the sea, they wondered among themselves: ‘Who is he, that even the wind and the waves obey him?’ Now, however, they learned that He’s the Son of the Most High God. This is because the devil also contributes to the implementation of God’s decisions, though not because he wants to or aims to. This is why one of the God-bearing Fathers says: ‘Evil collaborates with good, but not with good intentions’ [1].

Because the Lord wanted to show those present that the devil who was so terrified by Him wasn’t one but many, He inquired: ‘What is your name? And he replied “Legion”, for many demons had entered into him’. Certain people claim that a legion was made up of about six thousand.

‘And they entreated him not to order them to depart into the abyss’. You see, as we said above, it was fear that made them approach and prostrate themselves and use more humble and true words and phrases. And look at the almighty authority of Our Lord and God and Savior, Jesus Christ. The devil confesses that Christ is also Lord of the abyss. Who is it who oversees the abyss? Naturally, He Who sits in the heavens, He Who contains and directs all things.

Do you see, the swarm of demons couldn’t go anywhere, unless it gained His permission or consent. This is why, when it was ordered by the Lord to leave, but wasn’t told where to go it found refuge in the swine grazing in the hills, in order to get away through them. But they didn’t have authority, in their own right, even over the swine, much less over people. [i.e. they had to ask the Lord’s permission].The Gospel says: ‘Now a large herd of swine was feeding there on the hillside; and they begged him to let them enter these. So he gave them leave. Then the demons came out of the man and entered the swine, and the herd rushed down the steep bank into the lake and drowned’. So, the demons, seeking an excuse to escape, but with ill-intent, asked permission to enter the swine, because the Lord had expelled them from people. They realized, at that moment, that they hadn’t been expelled from one or two people but from all of us. The Lord permitted the following events in order to make us understand that, from what happened to the swine, the demons would have had no pity on the man and would have destroyed him utterly, had He not intervened with His invisible power.

‘When the herdsmen saw what happened, they fled, and told it in the city and in the country’. Please consider now the prodigal son in the Gospel, who made his decision to return home when he was looking after swine. You’ll see who these people were who herded swine, or rather whom they resemble. The life of a swineherd, because of its attendant filth, is a symbol of every wicked passion. [In this metaphor] swine, in general, bear the most soiled garment of the flesh and their guardians, their herdsmen, are, above all, pleasure-seekers, are concerned for the flesh and their food and are intent on satisfying their desires.

Time doesn’t permit us to go into further details, such as the stripping of the soul of sin, which is implied by this possessed man, nor his manner of life in the hills (as it says, ‘he wore no clothes and did not live in a house, but among the tombs’). Nor can we deal with the subjects of the chains, the fetters and the bonds which he broke and was then hounded out into the desert.

So let us distance ourselves from wickedness whether that means a smug relationship with one’s exalted lineage, with glory, with bodily strength and material wealth, or, on the other hand, with our resemblance to the swine. Let us bear in mind that lake of inextinguishable fire, into which, alas, all those will fall who serve the dictates of the demons without repenting. And, gazing upon the pit into which plummet those who live like swine until the end of their lives, let us turn irrevocably from the really filthy life of sin.