When we look at the icon of the Entry of the Mother of God into the Temple, we’re conscious of the silence of the Holy Scriptures and listen instead to the augmentation of the Gospels by the sacred Tradition of the Church. This presents us with the preparation of the earthly vessel of the Son and Word, the precious bridal-chamber, the heavenly tabernacle, as she’s described in the kontakio of the feast.

Saint John the Damascan declares that she ‘was planted’ in the house of God, that her spirit blossomed like a ‘laden olive-tree’, that she became ‘the refuge of all the virtues’, that she preserved her body and soul until she was able to receive Christ. As the dismissal hymn for the feast tells us, she is the prelude of God’s favor towards us, the announcement of our salvation, the proclamation of Christ and the realization of the plan of divine dispensation. We find a description of the entry in the Proto-Evangelium of Saint James, on which the hymns for the feast are based. The holy hymnographers proceed further than a description of the event itself and attempt to catch it mystical meaning, as this is set out in the dismissal hymn, as we’ve said: its relationship to the salvation of humankind. 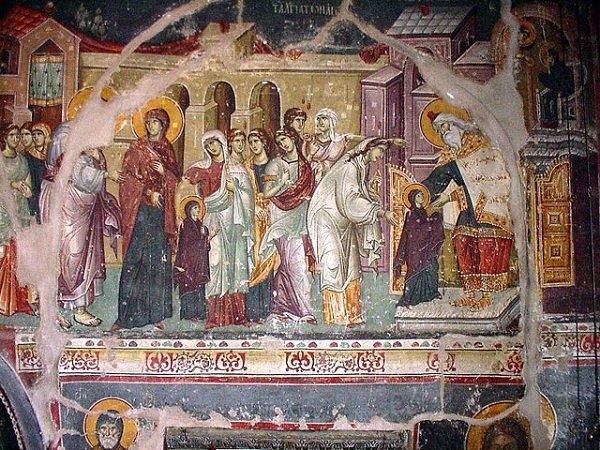 According to the Proto-Evangelium of Saint James, then, the ancestors of God, Joachim and Anna, were still childless after twenty years of married life and entreated Him to grant them a child. An angel of the Lord announced to them that they would, indeed, have a child and that they had to promise to dedicate it to God. Nine months later, a daughter, Mary, was born to them and they brought her up until the age of three when they delivered her to the priest in the temple, which she entered accompanied by an escort of candle-bearing virgins*. While the Virgin Mary remained in the temple, she spent her time in studying the Scriptures, in needlework and in prayer. She was also fed by the hand of an angel. At the age of twelve, as the result of a sign, she was given to Joseph, who was to be her guardian, not her husband.

As regards the time of the establishment of the feast, it’s not possible to determine it, though it’s connected to the ‘New Church’, the basilica of ‘Saint Mary the New’, built by Justinian in honor of the Mother of God. The church was erected on Mount Moriah in Jerusalem, to the south of the Temple of Solomon and was inaugurated in 543. The feast was firmly established some time between the middle and end of the 7th century and was introduced into Constantinople at the beginning of the 8th. The oldest iconographical depiction is a 5th century relief from Tarascon in Provence. The oldest depiction in the East is a miniature in the Menologio of Basil II (r. 976-1025), in which the Mother of God is portrayed as praying in the temple. In the 11th century, the composition was fixed as in the Monastery of Dafni [near Athens] with some variations, while in the 14th century the depiction changed to that in the Monastery of Hora, which showed the procession from home to the temple.

The usual depiction is as follows: the main person in the icon is Our Lady at three years of age. She is being received into the temple by the priest, Zechariah, who was later to become the father of John the Baptist**. Zechariah led her into the Holy of Holies, even though this was a privilege reserved for the High Priest, and then only once a year. A clear sign that she was chosen by God. In the icon, her God-fearing parents hand her to Zechariah, though sometimes it is both of them who do so, sometimes Joachim and sometimes Anna. Behind them an undefined number of virgins follow, ‘the spotless daughters of the Hebrews’, holding lighted candles. The Mother of God is depicted with normal features, that is to say there’s nothing of the child about her except for the size of her body. This is deliberate. The Orthodox iconographer wants to distance us from the letter of the narrative, in which Our Lady is a three-year-old child, so that we can see her spirit, her ecclesiastical dimension. Our Lady is the woman who bore God, she’s the Mother of God. This is why the hymnographer writes: ‘Let us praise in hymns the Mother chosen by God, a child in nature yet beyond nature’ (tropario at Mattins for the feast). Our Lady is portrayed as a mature woman, with her typical head-covering, as we see her in other icons. The hymnographer does the same with the virgins’ candles. The lighted candles aren’t there to prevent the three-year-old child from returning home, as the apocryphal tradition would have it, but to point to the notional candle, Our Lady, and proclaim in advance the ineffable splendor of the future, that is Christ who would be born of her and would shine light on the people dwelling in the darkness of sin. In many icons Our Lady is depicted, behind Zechariah, as sitting on a throne with three steps, awaiting the food brought to her by the Archangel Gabriel. In this icon, we should see the ‘Bread of Life’ which God gives His children, encouraging and preparing them to be brought into the True Life, by trampling down their will. More rarely, we see angels conversing with the Mother of God, as in the icon by Kontonis in the Benaki Museum.

In the person of the Mother of God, the transition from the Old Testament to the New is already complete. She’s in the temple, and will soon herself become the Temple of the Son and Word of God. She’s a more holy Temple than the one in Jerusalem and the greatest of all Temples, that is, she is that which all of us have as our objective to become, given the premises created by the Resurrection and by the Descent of the Holy Spirit.

*This is why the feast is known in Greek as τα Εισόδια, which means ‘The Ceremonial Entry’ or ‘The Celebration of the Entry’, not merely ‘The Entry’.
** The Tradition of the Church regarding this event would have been based on family knowledge and tradition. Joachim and Anna, Zechariah and Elizabeth, John the Baptist, James the Brother of the Lord, John the Theologian, James the Apostle, their mother, Salome, and others were all related in various ways. They would therefore all have been well aware of the story of Our Lady’s childhood. [WJL].