‘And Christ then said to him: ‘Go and do likewise’.
During the time of the Lord’s three-year public ministry ‘certain people who were accustomed to gossiping’ (Saint Cyril of Alexandria), spread the following about Him: they said that He disdained the Law of Moses and ‘brought new teachings into people lives’. This is why the lawyer in today’s Gospel reading comes and tries to involve Christ in a discussion in which he would achieve two things: he would force Christ to admit that the Law of Moses was out of date and that His own law was correct. This lawyer was ignorant of the fact that the Law-giver in both the Old and the New Testaments was Christ Himself. 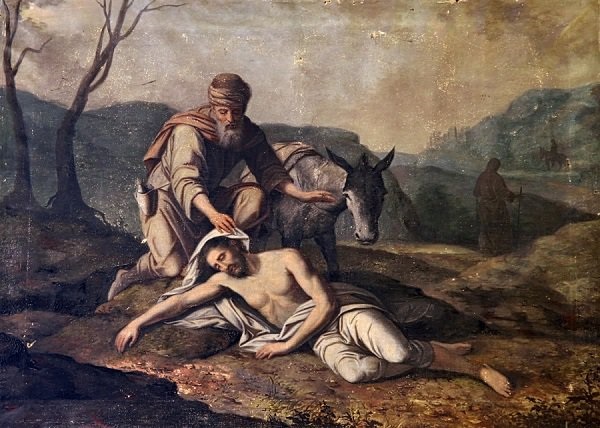 The Treatment of the Lawyer
It’s clear from the Gospel narrative that the lawyer approached Christ not with any intention of learning, but in order to provoke him. He addresses Him as teacher: ‘Teacher, what should I do to inherit eternal life?’ (Luke 10, 25). According to the Fathers, the intention of the lawyer wasn’t to learn any more than he already knew but to entrap Christ. Because Christ spoke continuously about the Kingdom of Heaven in His sermons, the egotistical lawyer used the words of the Lord to ensnare Him. Herein lies Christ’s acumen. He was completely neutral towards him. He neither revealed the man’s hypocrisy nor did he behave badly towards him. The lawyer was proud of his knowledge of the law of Moses. The Lord referred him to the Law. He asked him what it said and how he understood it (v. 26). When he responded correctly, the Lord praised him (v. 28). He didn’t upset him; on the contrary, without any hint of ill-will or unpleasantness, He praised him publicly. Thereafter, and so as not to seem as if had no substance to him, the lawyer asked who he should consider his neighbor (v. 29). The lawyer was a fount of knowledge, but not a vessel of the virtues.

The late Metropolitan Dionysios of Kozani used to say that virtue isn’t always to be found where there’s knowledge and where official status is paramount. ‘Virtue is in the practice, the implementation of what we say we believe in, in the application of the divine commandments, not merely in the knowledge of them’. The lawyer wanted to show Christ that things weren’t as simple as He was presenting them, but that they were complicated. ‘For he supposed he was superior in all things’, according to Patristic literature. The lawyer asked about his neighbor and Christ showed him what a neighbor would do.

One wanted knowledge, the Other showed him practical action. It’s through our charitable intentions that we show whether we se the person next to us as our neighbor.

In fact, if we know much and don’t apply it, this is a cause of censure for us: ‘ That servant who knew what his master wanted, but did not prepare himself or did what was wanted, will receive a severe beating’ (Luke 12, 47). Metropolitan Dionysios, whom we mentioned above, says that the news Christ bought about God is that He is our Father; and the news He brought about people is that others are our neighbors. No political or social system has ever achieved this fullness of the Gospel. We should see every person as the image of God. Political systems, on the other hand, speak about parties, groups, supporters and followers. Our Church, which is ‘Christ extended throughout the centuries’, talks about our neighbor, our brother and sister, about images of Christ, about love without discrimination and about the mercy of God.

Anthony the Great said: ‘I never set my own interest above the good of my brother’. And Abba Agathon adds: ‘Love is finding a leper and gladly giving him my own body and, if possible, taking his’. Let’s bear this in mind, so that we can do what we can for our neighbor, who is our brother or sister.