Give, Give to the Poor!

I know that a lot of people here will blame us, again, for speaking about this. They’ll say: ‘Please, don’t be heavy and boring with the congregation. Just leave it to each person’s conscience; leave it to their judgment. You’re embarrassing us; you’re making us blush…’ 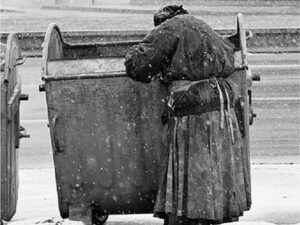 Well, no! I won’t put up with that. Saint Paul wasn’t ashamed to bother people on these issues and to beg like a mendicant. If I were saying: ‘Give me, bring me things for my house’, that might be shameful. But not really. ‘Do not those who serve at the altar also have a share in the sacrifices?’ (1 Cor. 9, 13). Still, somebody would be bound to blame me for talking about myself. But I’m not. I’m asking on behalf of those who are deprived. And not even really for them, but for you who give. This is why I can speak without embarrassment.

Because where’s the shame in saying: ‘Give to the Lord, who’s starving’? ‘Clothe Him, since He’s going around naked’. ‘Be welcoming to Him, because He’s a stranger’. Your Master wasn’t ashamed to say in front of everyone ‘I was hungry and you didn’t give me anything to eat’ (Matth. 25, 42), even though He was self-sufficient and wanted for nothing. So should I be embarrassed and hesitant? Please, far be it from me to be so. That embarrassment comes from the devil.

So I’m not going to be ashamed. Quite the contrary, I’m going to say boldly: ‘Give to those in need’. And I’ll shout even louder than them. And if anybody’s got proof and can charge us that we’re saying this in order to siphon off the gifts for our own benefit, and that, on the pretense of assisting the poor we ourselves are actually profiting, then that really would be shameful. It would deserve a thousand thunderbolts, because people who would act like that don’t deserve to live.

If, by God’s grace, we’re not bothering you on our own behalf and we preach the Gospel freely, though not laboring as much as Paul did, but still satisfied with what we have, then, allow me to say bluntly: ‘Give to the poor’. And I’m not going to stop saying it. If you don’t give, I’ll be harsh in my condemnation.

From Homily 43 on 1 Corinthians.