‘If you Want to Enter Life, Keep the Commandments’

The rich young man in today’s Gospel reading seems to have metaphysical concerns and considerable spiritual interests. His young heart burned for the sublime, the eternal, the things to come. He approached the Lord with zeal and with a genuine willingness to learn. A desire and flame had awakened within him which forced him to approach Christ and ask Him the following question: ‘Good teacher, what must I do to inherit eternal life?’ The Lord replies: ‘Why do you call me good, since you consider me to be a normal person? No-one’s completely good except God alone’.

Thereafter Jesus reminds the young man of the commandments of the Law of Moses: don’t commit adultery, don’t kill, don’t steal, don’t bear false witness, honor your father and mother. Observance of the Lord’s commandments is a basic and necessary requirement for our salvation. We aren’t saved merely by believing. We also need to perform works. We should remember the words of the Lord: ‘Those who have my commandments and keep them are the ones who really love me’ (Jn. 18, 21); and in the Wisdom of Sirach: ‘nothing is sweeter than to observe the Lord’s commands’ (23, 27). The divine commandments are a unified whole and the one depends on the other. Non-observance of one betrays a sinful disposition which will reveal itself, in the wrong circumstances, in the transgression against another, or others. And also in the contempt and disdain for the divine Law-Giver Himself. 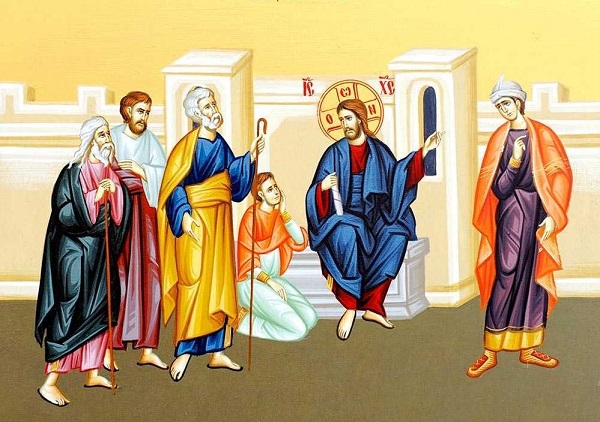 ‘Teacher, I’ve kept these commandments since I was a child’. ‘Then’, says the Lord, ‘you’re lacking only one thing. Sell all you have and, since you desire eternal life, divide the proceeds among the poor and come and follow me’. As soon as he heard this, the young man became dejected, despondent and saddened. The reason was that he was very rich. He couldn’t break through the wall of his wealth. ‘He grew fat, he became thick and broad: then he forsook the God that made him, and departed from God his Savior’ (Deut. 32, 15). Then he realized how difficult it was to give yourself over completely to God.

When Christ saw the young man departing so disappointed, He said: ‘How difficult it is for those who have money to enter into the Kingdom of God. It’s easier for a camel to pass through the eye of a needle than it is for a rich person to enter the Kingdom of God’. When the people heard this they asked: ‘Well, in that case, who can be saved?’ Christ answered that what’s beyond our own limited, human powers is achievable and possible by the Grace of God.

It’s not enough that you don’t steal, you don’t kill. You need something more: to love. This is what Christ invited the rich young man to do, but he didn’t have the strength to do so. It’s only people who love who achieve the unachievable. Where love flourishes, Grace comes.

Our life is full of examples such as that of today’s rich young man. We’ve all known examples of wealthy people who worship and venerate their possessions as if they were god. And then, suddenly, they lose everything and they’re out on the streets. We recognize this dire situation when we sing in Church the ancient verse from the Psalms (33, 11): ‘The rich have been made poor and hungry, but those who seek the Lord shall not lack anything that is good’.

Christ is blunt with the rich man in the Gospel reading today. Not to insult him, nor to punish him, but to help him, to show him his inadequate spiritual state. But the Gospel narrative also reveals something very important to us, too: the manner in which we should strive spiritually. Christ tells us quite plainly, that any dependence on money is idolatry which manipulates us, subjugates us and, in the end, controls us completely. The young man in today’s Gospel loses eternal life. He preferred his wealth and loved his money more. May our own choice be different. May we use the perishable to purchase the imperishable, the transient the eternal, and through the proper use of money, may we enter into the Kingdom of Heaven. Amen.