Religion / Biblical Theology
Miltiadis Konstantinou, Professor of the School of Theology of the University of Thessaloniki

Our Most Holy Lady as the Temple of God

If one were to attempt to describe the role and purpose of the Church in a single phrase, one might say that: ‘The aim of the Church is to manifest God to people’. In order to achieve this goal, the Church uses theology, which expresses the faith of the Church in two ways: either through words or through images. However, the power of words and images, when attempting to reveal God, are necessarily limited and so, if we’re to understand their content properly, we have to approach them with great care and always to be aware of the requirements this approach implies. A typical example of the use of images, of icons, to express the faith of the Church is the feast we celebrate today, the Entry of the Mother of God.

The historical foundation for this feast lies in the Byzantine period. In Jerusalem, on the site previously occupied by the temple of Solomon, Emperor Justinian built a large basilica in honor of Our Most Holy Lady. The church was inaugurated on 20 November and, every year, a magnificent feast-day was celebrated on November 21. At the end of the 7th or beginning of the 8th centuries, this feast came to be associated with an ancient Christian legend, according to which Our Lady, at the age of three, was dedicated by her parents to the temple of God, which at that time stood on the precise spot chosen for the new church. This is why the reading from the Epistle to the Hebrews at today’s feast refers to the description of the temple in Jerusalem. 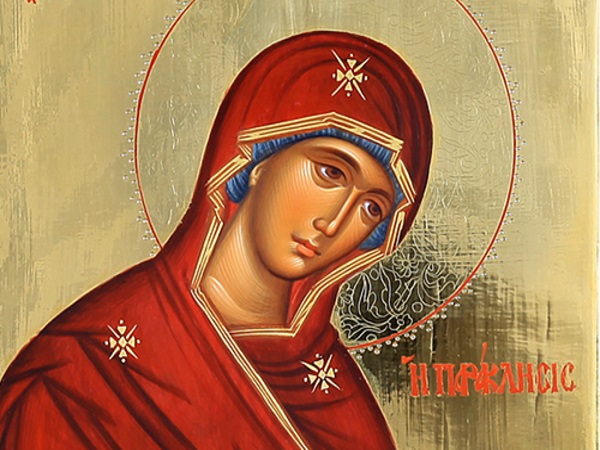 This linkage between the temple in Jerusalem and a feast of Our Lady conceals a most profound symbolism and, if we are to understand it, we need to bear in mind the way people saw temples in the pre-Christian period. A general feature of almost all ancient religions was the idea that the gods dwelt simultaneously both in the heavens and in the temples dedicated to them. So the temple was the locus where the difference between heaven and earth was suspended and anyone entering the temple would, at the same time, be standing before the celestial throne of God. At the site of the temple, there was a transcendence of the categories ‘earthly’ and ‘heavenly’, since the boundaries between heaven and earth were blurred. So, in the minds of the ancients, the temple was a place where a piece of the earth reached the heavens, or, by the same token, a piece of the heavens touched the earth.

Precisely because the locus of the temple was associated with such circumstances, the faithful were forbidden from entering. In the innermost place of the temple in Jerusalem, only the High Priest was allowed to enter, once a year, in order to sprinkle it with the blood of the sacrifice which had been offered in the courtyard. This strict boundary-line between the locus where the deity dwelt and the space believers were permitted to enter was erased by Jesus Christ. Since God became a human person and came to live among us, He did away with any partition between the divine and the human.

With God’s incarnation, the whole world became a temple, in which everyone has the opportunity to communicate directly with God. So, through its architecture, an Orthodox church symbolizes the universe and each part of it is a piece of the cosmos: the floor represents the earth on which we find ourselves; the ceiling is the heavens, which is why there’s always an icon of Christ Pantokrator (the Lord of All) in the center, looking to be of average age, neither young nor old, in order to show the union between Father and Son; the architectural part of the church which links the floor to the roof, that is the earth to the heavens, is the apse in the sanctuary, which is why there’s always an icon of Our Lady there: to show that the contribution of this poor little girl from Palestine made possible the union of earth and heaven. These are a series of symbols and images, but, if they’re interpreted properly, they summarize the whole theology of the Church.

The image of Mary entering the temple depicts most vividly her role in the history of the human race. Whereas the temple in Jerusalem symbolized the dwelling-place of God, He really did abide in the womb of Mary. Whereas the temple in Jerusalem symbolized the heavenly throne of God, Mary really did become His throne, so the hymnographer of today’s feast rightly identifies her with the heavens: ‘Heaven and earth rejoice, seeing the perceptible heaven modestly entering the house of God to be brought up there’.

And, finally, if the temple in Jerusalem was the dwelling-place of God and therefore holy to the Jews, it’s right for Christians to call Mary ‘Most Holy’. The icon of Mary entering the temple demonstrates clearly the abolition of the space separating the heavenly and the earthly worlds, which was achieved through Christ’s sacrifice on the Cross and His Resurrection. Now, we all have the chance to become citizens of heaven. But this opportunity, this gift from God to us, is not free of obligations. Since, as we’ve said, the whole world has become a temple of God, it’s no longer possible for people to behave one way in their everyday life and another way on Sundays, in the church. If you go to church to glorify God, then you ought to do the same through your actions on an everyday basis.

It’s well-known that the enormous changes at the end of the 20th century, on the socio-political and economic level, shattered the hopes of millions of people and caused many of them to feel insecure and uncertain. There are thousands of people who are in such despair regarding the various social and economic systems that they’re trying to find solutions and refuge in the most unlikely religions that the human brain can invent. In the general disorientation of the present age, Christians are called upon to become signposts for other people, through their way of life. This presupposes continuous self-control, so that all our choices and actions are in accordance with the will of Go. It requires a willingness on the part of Christians to listen, at every moment of their life, to what God is asking of them, and for them to be able to repeat Mary’s words: ‘Behold the servant of the Lord; let it be to me in accordance with your word’. Then the words with which Christ’s closes the Gospel reading for the feast will apply to them, too: ‘Blessed are they who hear the word of God and keep it’.