‘Saint David told Christ, Who did him a Favor’

A Miracle of Saint David and Elder [now Saint] Iakovos

Fr. Ioannis relates the following events.
‘At the hospital where I was working, a young student, 19 years old, was admitted with a temperature of 102, 104, 105. This student was called Stylianos Steryianos, born of Christos and Evangelia and lived in Patisia. His parents were my spiritual children, very devout people, and they had another son.

So, Stelios had had this high temperature over a long period of time and it wouldn’t go down at all. There was no diagnosis and, in the end, the consultant [1] and his staff concluded that Stelios’ sickness was a form of Mediterranean anemia. They used all available medication, even high does of cortisone, but to no avail. 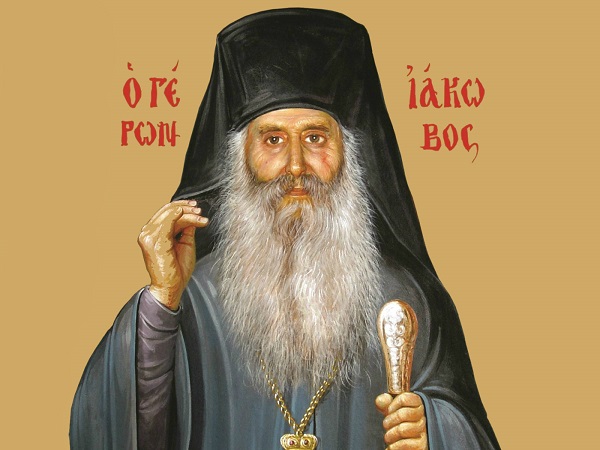 The doctors told us that even the slightest microbial infection could bring on death. The doctors held consultations and, after a few days, told us that medical science could do no more. Together with the medical team, the hospital staff and the poor parents, we were all awaiting the final moment. At that time, I suddenly thought of Elder Iakovos.

I telephoned the father and quickly told him: “Christos, Stelios is an angel and Christ wants him with Him. The only person who can help us in this situation is Father Iakovos, but, unfortunately, you can’t leave because we’re all waiting for the end”.

Christos seized on my words- in any case, he had no choice- got into his car and drove as fast as he could to the Monastery of Saint David. He found Elder Iakovos, fell at his feet, and, weeping bitter tears, told him about the problem with his son. The Elder seemed to be already aware of it. “Christos”, he said. “just give me a minute, would you? I’ll go and pray”.

Soon afterwards, the miracle happened. “Christos just this minute the temperature’s dropped. The boy will recover. Saint David told Christ and He did him this favor”.

Christos was utterly astounded and phoned the hospital. The senior nurse answered and told him: “Christos, the whole hospital’s celebrating and we were looking for you. Five minutes ago, Stelios’ temperature fell and there’s no accounting for it”.

Stelios is now married with two children. He’s a true child of the Church, with all the spiritual gifts that Christ has given him.

I experienced this event on a twenty-four hour basis, because the boy was and is a favorite of mine and his parents were among my most special spiritual children.

[1] In the Greek text, all the names are given, so that the information can be checked [WJL]