‘Just as marriage is a haven, so it can also be a shipwreck. Not by its nature, but by the bad use some people have put it to’.

These words of Saint John Chrysostom highlight truths which contemporary society doesn’t wish to see. ‘Marriage is a haven’. In a haven, ships are protected from the storms of the seas. In the same way, the couple, the husband and wife, are protected from the storms of life because they’re together. The instability of human relations, fear of loneliness, the lack of comfort when other people, work, financial woes or politics depress us, the stirring up of emotions, especially in an era of sensualism which drives people to seek pleasure but makes it difficult to love and be loved, are all dealt with in the haven of marriage. 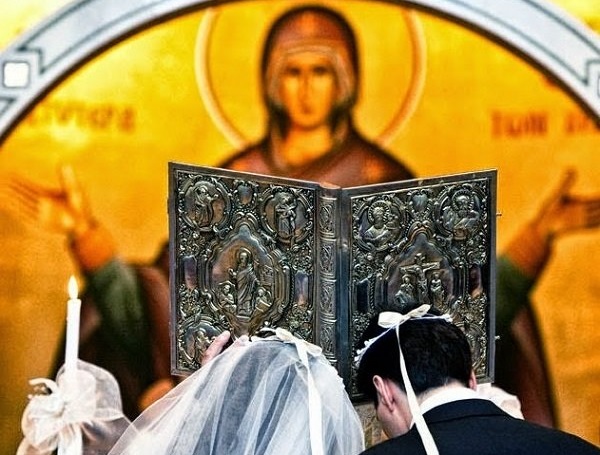 Ships make repairs in harbor. They take passengers and goods on board. They prepare for new voyages. This is what happens in marriage, too. Husband and wife have their love for one another as their motive for adding knowledge and abilities to themselves, for seeing their mistakes and for attempting to change. In particular, they have the blessing of adding passengers to the ship of marriage in the form of children. And they can undertake the responsibility- a great joy and cross- of allowing their heart to be filled with love, which starts with their spouse and broadens out to include the whole world, as this is represented in the persons of their children. Because children show parents that love isn’t closed off, but open-ended. Through their children, they’re called upon to see life and other people as they really are. They’re totally invested in them. They come out of their shells. They engage in the struggle to help people to survive and to acquire values, meaning and qualities. In this way, they overcome death.

Ships don’t sink in the harbor. But if the captains don’t keep an eye on them, if they don’t inspect them and look on them as, say, lodgings rather than a home, then the next time they set sail on a voyage, there’s a danger they’ll sink. The same is true of marriage. Unless the couple looks after one another and together take care of their marriage, if they aren’t constantly renewing their understanding, communication and passion, then the marriage becomes mere co-existence, with no substance. The home becomes a boarding-house which is lived in but doesn’t unite. When one of the couple doesn’t look the other in the eye, isn’t sincere, isn’t totally committed, doesn’t die for the other, but chooses to emphasize what it is about the relationship that’s different, disappointing, displeasing or lacking, they end up rejecting the other spouse as a person. Then all closeness is lost. The marriage sinks because the couple has lost their capacity to find room for the other, they’ve lost the ability to walk in step so that one doesn’t go faster than the other.

Saint John Chrysostom’s words are always topical. They come from a man who experienced the Church as a haven. And it’s only in the Church that marriage is a haven. In the presence of Christ and the induction into His body. We need this.