The Aim of Christ’s Redemptive Work

In his First Epistle, Saint John the Evangelist tells us that the aim of Christ’s redemptive work was the abolition of the devil’s dominion over human nature: ‘The Son of God appeared so that He might destroy the works of the devil’ (1 Jn. 3, 8). The Lord didn’t just destroy the works of the devil, but the devil himself. We can see this happening in the temptations in the wilderness, in the healing of those possessed and, in particular, in His death on the Cross.

1. The temptations in the wilderness.
After His baptism in the River Jordan, Jesus was led by the Holy Spirit into the wilderness, in order to face the temptations of the devil and defeat him. Through this victory, He showed us how we’re to deal with the problems of temptation. The devil saw Christ as a human person and tried to get Him to submit to his will by enticing Him with various offers. He watched Him fast for forty days and nights in this stark location. As the Evangelists mentioned, after such an exhausting fast ‘He was then hungry’. Saint Epifanios says: ‘He was hungry to show he really was human’. Given Christ’s weakened state of advanced hunger, the devil thought his victory was assured and issued his first challenge: ‘If you’re the son of God, make these stones into loaves’ (Matt. 4, 3). 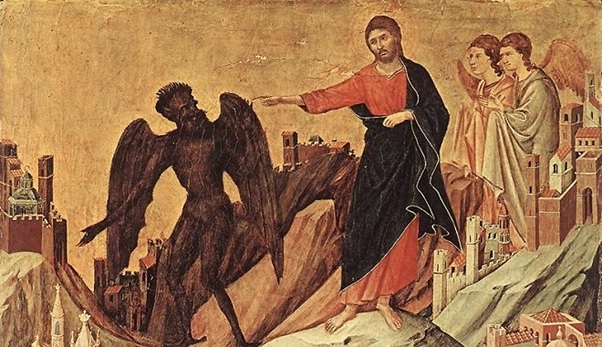 The devil was aware of Jesus’ relationship with God up to a point, but wanted more information. He was at a loss and doubted He was really the Son of God. He looked on Christ simply as a human being and, as such, He ought to have succumbed to the temptation of the need for food. This is why he says: ‘If you’re the son of God’, rather than just ‘If you’re hungry make these stones into loaves’. The devil wanted Christ to meet his bodily needs through the performance of a miracle. Christ’s answer: ‘People do not live on bread alone, but on every word that proceeds from the mouth of God’, doesn’t convince the devil, so he proceeds to the next challenge in the testing of Christ’s divinity.

He led Him to the holy city of Jerusalem, set Him on the highest part of the temple and said: ‘If you’re the son of God, jump off and you’ll come to no harm because the Scriptures say that God will give His angels charge over you to prevent you from falling and from dashing your foot against a stone’. This event is a cause of astonishment and wonder. Before Christ’s death on the Cross, God the Father cedes supernatural power to the devil, who brings Jesus to the highest point of the temple. This demonstrates Christ’s great humility. Saint Gregory the Theologian writes that we shouldn’t be surprised that Jesus allows the devil to lead Him at will, because He also submitted voluntarily to death on the Cross. Zigavinos observes that Christ permitted the devil to take Him wherever he wanted, so that he’d be defeated in all his efforts at tempting Him and would quit his efforts at temptation of his own accord. Certainly, Christ’s humility is of particular significance for the faithful. Christ gives us the example of forbearance, patience and humility before His suffering on the Cross in order to teach us that undergoing temptations is a necessary stage in overcoming the devil in our personal struggle. Christ suffered as a human person and we, in turn, have to suffer as He did.

The devil’s third temptation of Christ was aimed at arousing our human desire for the conquest the world, the acquisition of worldly glory and material possessions. The devil aimed at subjugating the Son of God to his authority, since any acceptance of this third temptation on the part of Christ would have meant bowing down to the devil. ‘I’ll give you all of this if only you’ll fall down and venerate me’. When Christ says: ‘Get out of my sight, Satan. The Scriptures say that you should venerate and worship only the Lord your God’ (Matt. 4, 10), He’s bringing these temptations to a close.

The devil was deceived both in the wilderness and at the Cross of Christ because he saw only His human nature. In the case of the Cross, his short-sightedness cost him his authority over those human souls who are treading the path of glorification by Grace.

2. The healing of the possessed.
The defeat and destruction of the devil was also achieved on the level of the cure of those who were possessed. Demons had settled into the spiritual and bodily world of these people and they were in total control of their existence.

In the well-known instance of the two people in the land of Gadara, the humble attitude of the demons shows the decisive power and authority which Christ had over their eradication. As soon as they saw Christ, they shouted to Him: ‘What do you want with us, Son of God? Have you come here to torture us before the appointed time?… If you drive us out, send us into the herd of swine’. The demons knew only of the torments they would suffer at Christ’s Second Coming and so were taken aback that they were to be tormented before that time.

The Lord delegated the task of liberating people possessed by demons to His disciples. He called them together and assigned to them authority over demonic spirits, so that they could cast them out. (Matt. 10, 1). And, in another instance, He told them: ‘Expel demons’ (Matt. 10, 8).

And Saint Luke the Evangelist relates that, after Christ had sent out seventy-two of His disciples, they returned with joy and said, ‘Lord, even the demons submit to us in your name’. The Lord then took the opportunity to tell them: ‘Since I started my work and when I sent you out and now that you’ve come back to tell me about your success against the demons, I’ve seen Satan losing his authority. I’ve seen him falling, utterly defeated from the height of his power and the spheres of the aerial world where he exercised his dominion. I saw him fall so quickly, so clearly and so devastatingly that it was like a bolt of lightning’. (Luke 10, 18).

3. Death on the Cross.
The perfect and final abolition of the power of the devil over human nature- which was renewed in Jesus Christ- came with His death on the Cross. Those Christians who strive to keep His commandments and wish to become ‘ in the likeness’ of Him, belong to Christ and the devil can’t arbitrarily meddle in their efforts towards salvation.

By His death on the Cross, Christ cancelled the record of our sins, nailing it to the Cross and ‘having canceled the debt ascribed to us in the decrees that stood against us, He took it away, nailing it to the cross. And having disarmed the powers and authorities, He made a public spectacle of them, triumphing over them by the cross’ (Col. 2, 14-15). But we see that even after the Crucifixion, the devil continues to tempt and torment the faithful. Although he’s bound and doesn’t have the freedom to trouble us at will, God uses him as an instrument for the illumination of the faithful, by allowing him the opportunity to test them with trials and sorrows.

In his work 400 Headings on Love, Saint Maximos the Confessor mentions the reasons why God allows the devil to train believers.

‘God allows the demons to wage war against us for five reasons:
The first is as follows: being fought against by the demons and fighting back at them, we acquire experience and discernment of the various forms of vice and virtue.

The second is that, having acquired the virtues through warfare and labors, we hold them fast and unassailable.

The third reason is so that we should not become proud as we progress in the virtues, but should remain humble.

The fourth is, when we’ve seen for ourselves the sordid squalor of sin, we should hate it in our heart.

The fifth reason, together with all the above, is that we shouldn’t forget our human weakness, nor the power of God which will help us, by His Grace, to rise above the passions.

Of course, the faithful are required to be vigilantly on guard against the challenges of the devil, or, as Saint Paul says ‘the artifices of the devil’ which threaten their spiritual standing and their relationship with God and the Church. With the outlook: ‘I can do all things through Christ who strengthens me’ (Phil. 4, 13), the faithful can overcome these challenges to their spiritual benefit and progress and the reinforcement of their efforts in the struggle to become like Christ.