Today the Church celebrates and honors the sacred memory of the holy Αpostle Andrew, the First-called. Saint Andrew was from Bethsaida in Galilee, a small town on the shores of Lake Gennesaret. He was the son of Jonah and the brother of Simon, whom Jesus Christ later re-named Peter. Andrew was first a disciple of John the Baptist and is called the First-Called because he was the first to be invited by Christ to the ranks of the apostles. Like his father and brother, he was a fisherman. He heard John the Baptist pointing out Christ and saying: ‘Behold the Lamb of God’. Andrew and another disciple approached Christ , Who turned to them and asked: ‘What do you want?’ Andrew said to him: ‘Teacher, where are you staying?’

It seems that the other disciple of the Baptist who was with Andrew was the later apostle and Evangelist John, who never gives his name in these cases. In response to Andrew’s question, Jesus says: ‘Come and see’. Saint John the Evangelist continues his narrative with the following noteworthy words: ‘So they went and saw where he was staying and stayed with him that day until about the tenth hour’, that is until about 4 o’clock in the afternoon. We can imagine what John’s two disciples would have heard from the divine Teacher during the whole day they spent with Him and what their impressions would have been. 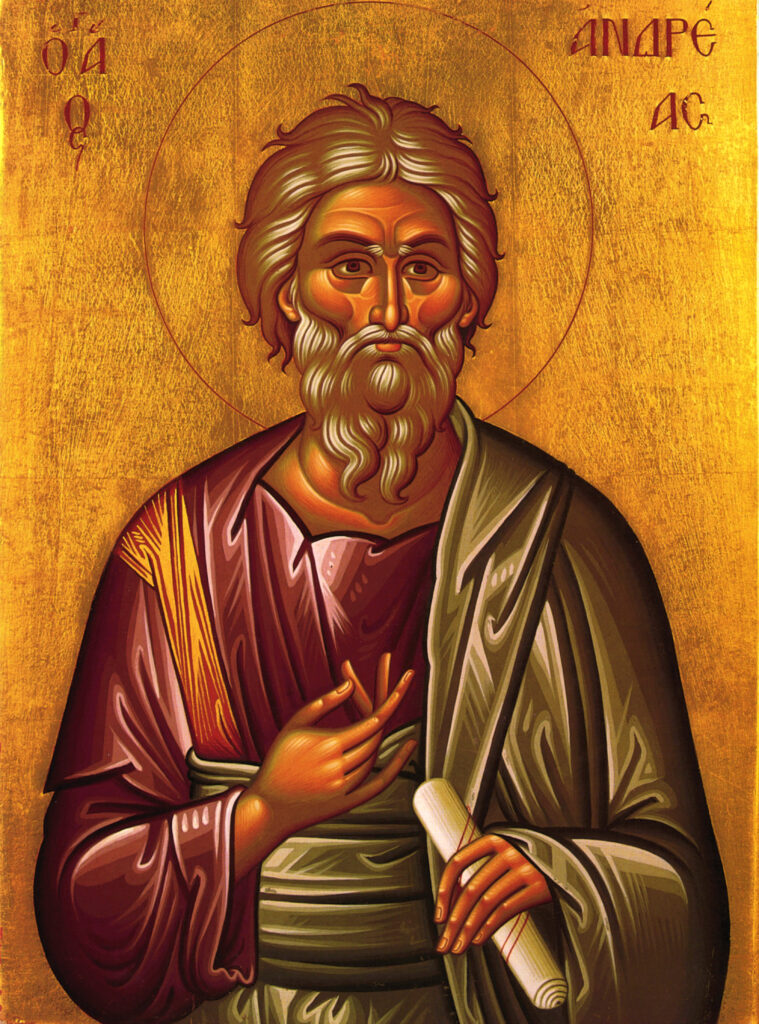 We see the impression and the effect of the day-long sojourn and conversation with Christ on the fishermen of Galilee in the next part of the Gospel narrative. It says that Andrew ‘first found his brother Simon and said: “We have found the Messiah”’. The Hebrew word ‘Messiah’ and the Greek ‘Christ’ both mean ‘the One sent by God’, Whom the people were awaiting. Everything was ready. John the Baptist had pointed out Jesus and said: ‘Behold the Lamb of God’. Jesus Christ now spoke to the two fishermen and convinced them that He was the One they’d been waiting for. There was no room for doubt and Andrew, full of joy and divine enthusiasm brought the news to his brother.

Not only that. The sacred text adds that Andrew fetched his brother and presented him to Christ, Who looked him in the eyes and said: You are Simon the son of Jonah; you will be called Cephas’. The Evangelist explains that Cephas means Peter [Rock] in Greek. Why Christ changed Simon’s name to Cephas, that is Rock, is explained by the Evangelist Matthew. After Peter’s great confession, Jesus Christ said, among other things: ‘You are Peter and on this rock I will build my Church…’ Peter’s confession that Jesus was the Messiah, the Son of the true God, is the rock of faith and the foundation of the Church.

Andrew’s first meeting with Christ was not the definitive call to the task of discipleship. It was when John the Baptist was arrested that Christ actually called the disciples who would become apostles and again He called Andrew first, together with his brother Simon Peter, whom he found ‘casting nets into the sea’. We see Saint Andrew another two times in the Holy Gospels. Once was when he and Philip brought some Greeks to Jesus because they wanted to see Him. The second time was when Jesus Christ was speaking of the destruction of Jerusalem and Andrew, together with Peter, James and John asked: ‘Tell us when this will come to pass’.

After Pentecost we don’t know a great deal about the life and work of Saint Andrew the Apostle. What is certain is that it is linked to the Church in Greece and Byzantium. He founded the Church in ancient Byzantium, which is why the Patriarchal church in Constantinople today is dedicated to him. In Greece, he was the founder of the Church in Patra, where he was martyred, crucified on a saltire (X). The church of Saint Andrew in Patra is one of the most magnificent in Greece today. In 1460, Thomas Palaiologos fled an invasion by the Turks and took the saint’s holy skull with him to Rome. A few years ago [1964], the Metropolitan of Patra brought it back to the city*. The words of Saint Andrew the Apostle forever ring in our ears, because they’re among the most memorable in the whole of the Gospel: ‘We have found the Messiah’. Amen