The Rich Man and Lazarus

In today’s Gospel reading, we hear a parable of Our Lord Jesus Christ concerning a wicked rich man and poor Lazarus. The parable teaches us that a time comes in our life when everything changes. Poor Lazarus, because he bore his poverty with patience, went to the bosom of Abraham; the wicked rich man, because he didn’t make good use of his wealth, was tortured in Hell. 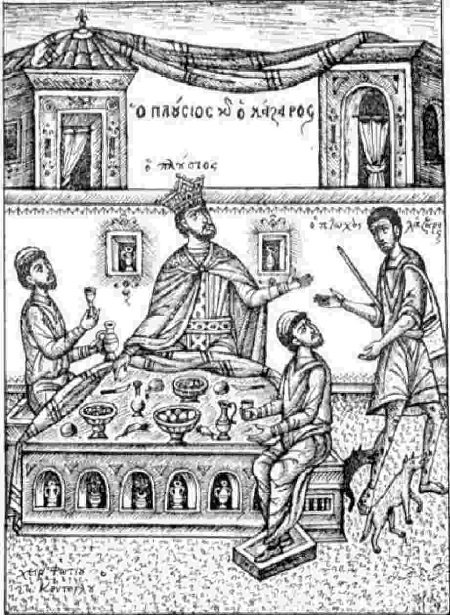 People who don’t believe in the next life say: ‘Let’s eat and drink, for tomorrow we die’. They’ve got their good things, whatever they might be, and they enjoy them, by themselves. They dress well, they have their ornaments, eat and are merry, build houses, buy land and save money. And next door to them are the others: the hungry, the naked, the homeless, the sick, the old, the widowed, the orphans, all the wretchedness of the human world. How can you be merry, when somebody else doesn’t even have bread? How can you dress finely, when the next person’s naked? And how on earth do you build, and then build again when your brother or sister’s on the streets? You’ll say: ‘I eat and dress and build with my own money’. I’m not saying that it’s not yours. Nor that you got it by stealing, lending at high interest and cheating people, because there’s lots of people who became rich in that way. But who ever told you that what’s yours is only for you? God Himself has allowed you to become rich and somebody else to be poor, so that, in your wealth, you’ll love other people, and the other will display patience in poverty.

Why do you suppose the rich man went to hell? Just because he was rich? So was Abraham and he was the first and best among the righteous. There are lots of people who see inequality in the world and are troubled by it. They complain and start revolutions and grumble about wealth, because, supposedly, it’s cursed by God, and we shouldn’t have any property of our own and so on. But it’s not the things that are to blame; it’s the people. Money’s not the problem; love of it is. In itself, wealth’s neither good nor bad; it’s in the hands of people that it becomes good or bad. The rich man didn’t end up there for no other reason than that he was rich, but because he was wicked and rich, a callous and hard-hearted person. With his wealth, he could have bought Paradise, but because of it, he went to Hell.

And Lazarus. Do you suppose he ended up in the bosom of Abraham merely because he was poor? If that had been the case, he should have found himself with another poor person, not with wealthy Abraham. And then, the situation of people in the next life should be different: all the rich in Hell and the poor in Paradise. But there’ll be rich people in Paradise and poor people in Hell. Just because somebody’s rich doesn’t mean they’re bad and it’s not enough to be poor to say that you’re righteous. Poverty’s bad. It’s a legacy of the sin of the First-Created and then of our own. Because there’s quite a few people who are poor because they’re block-heads: the prodigals who waste their substance on drink, cards and living it up at night. If you’re profligate and lazy, then poverty’s your fate. But poverty’s good as well. Because, poverty is, first and foremost, the state of saints. Saints love being poor, they bear their poverty with patience and pride. You don’t love poverty and are afraid of it? Well, do an honest day’s work and put something aside, so that you’ll be self-sufficient. If you’re devout as well, then you’ll really be rich. Rich people are those who make do with not much; the poor are those who need lots of things.

Christ said: ‘Woe to you who are full’. He meant the callous and hard-hearted rich people, like the one in the parable. Again, he said: ‘Blessed are the poor’, meaning those like Lazarus, who aren’t poor through their own stupidity and who bear their poverty with patience. In our case, if we’ve got material wealth, let’s also have the riches of kindness and the treasury of love. And, if we’re poor, let’s be poor in wickedness, as well. Let’s not be rich in money and poor in love; or poor in money and rich in wickedness. Let’s be rich and poor here, so that we’ll be together in Paradise. Amen.