The Significance of Christ’s Nativity for Us

The Gospel reading for the Sunday before Christmas is taken from the beginning of Saint Matthew’s Gospel. It describes first the genealogy of Christ according to the flesh and then God’s dispensation regarding His birth from the Holy Spirit and the Virgin Mary. Let’s turn our attention to the significance of this event for each one of us.

Every year, in an atmosphere of joy and exultation, the Church celebrates the Birth of Christ and sings beautiful hymns to the incarnate God Who remakes our corrupted human nature. Orthodox hymnography and theology acclaim the enormous importance of the divine incarnation for humankind: from hopeless decay and the chaos of destructive hatred, we are saved by the love of God, Who took flesh and bone, within history, through the person of Jesus Christ. He not only redeems us from certain destruction, but also brings us back to our ‘ancient beauty’, ‘deifies’ us, in the language of the Fathers. 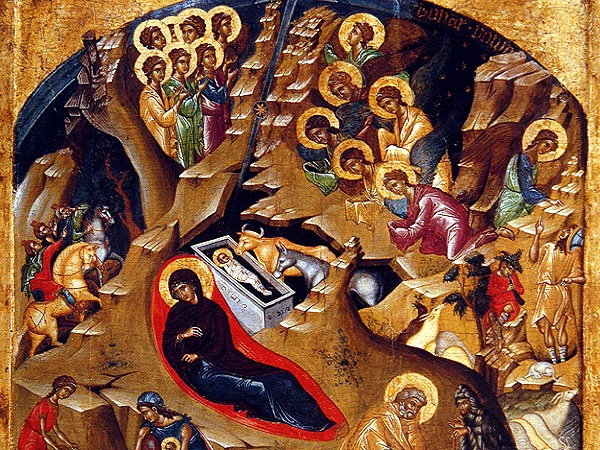 That which we could never have achieved because of our subjection to the demonic power of corruption and sin is given to us by Him Who is born of the Holy Spirit and the Virgin Mary. It is precisely the Savior’s provenance from the Holy Spirit that eloquently demonstrates that salvation could never have been achieved from the rubble and debris of humanity which had inevitably been condemned to death. It could come only from heaven, from the Spirit of God, from the source of life.

We speak of the significant transformation which the Birth of Christ means for us as if it were an objective circumstance which is related to us, certainly, but somehow independent of us. We forget that each of us has to relate immediately, dynamically and existentially to the important event of the Nativity. We accept that this personal omission on the part of each of us is due to the tragic contradiction between the fact that, although Christ was born in order to save us from the corruption of sin and death, we, however, degenerate, we’re destroyed, and destroy others on a daily basis. Even as the angels sing the glad tidings that ‘the Savior has been born’ and ‘peace on earth’ has come (Luke 2, 11;14), the media and sources of information are bearing wretched news about wars and catastrophes.

Christ’s Birth acquires meaning as an existential event for each of us in our singularity and uniqueness, in our personal problems and worries, in our fear of extermination and our hope for life. If the Sun of Righteousness doesn’t rise in the soul of each of us, it’s pointless to expect the enlightenment of humankind as a whole. If salvation isn’t a personal concern, it’s no use wondering and complaining about the general prevalence of hatred, crime and war. If the Nativity of Christ is no more than an important but distant historical event, or a moving feast of the Church and isn’t accomplished in each one of us, we await its manifest results in vain.

The God of love and peace takes on flesh within history, effectively dividing it with a bright boundary line between pre-Christian darkness and Christian light; pre-Christian hatred and Christian love; the pre-Christian atmosphere of the ‘odor of death’ and the Christian hope of the resurrection. If our life today bears the hallmarks of the pre-Christian era, as described above, we don’t have to look outside ourselves to find the reason. Christ’s Birth doesn’t, in and of itself, mean the triumph of love and peace. It’s the starting point for a dialogue, an opportunity for us to change in such a way that, if we listen to the divine message and take it to heart, we’ll be radically altered as people. We’ll cease to see others as enemies against whom we have to defend ourselves all the time and, indeed, whom we often have to attack if we’re going to preserve our individual identity. We’ll see them as siblings for whom the Son of God was born, crucified and rose, as He was for us.

Many non-Orthodox theologians describe the Orthodox Church as the pre-eminent ‘Church of the Resurrection’. And this is so. It’s equally true, however, that the Fathers and theologians of the Church often turn their thoughts to the ‘mystery’ of the incarnation, which is the foundation and nucleus of their theology, the necessary condition for our salvation, which involves the transformation and renewal of all things.

But beyond these theological formulations concerning the incarnation of the Word, useful though they are, beyond the recognition of its importance to us as people and its renovating power, beyond and within the festal atmosphere of the hymns of the Church, what is needed for the results of the Birth of Christ to be made manifest is for each of us to kneel humbly before the manger, to decide to engage in an existential dialogue with the new-born Savior, Who is always present in the world.