In the passage 1, 25 in the Gospel according to Saint Matthew… ‘but he knew her not until she had given birth to a son’ many Protestant and other heretical interpreters consider the Greek εως ου to be a time limit, after which the married life of Joseph and Our Lady began. From these conjugal relations, they believe, were born siblings of Christ, or at least some of the siblings referred to in the Gospels. But, from a grammatical point of view, this interpretation is not necessarily correct, since the temporal conjunction εως is often used not to demote a time limit, but rather limitlessness within time.

The passage is at the end of chapter 1 of the Gospel according to Saint Matthew, which is concerned with the genealogy and birth of Jesus Christ. Matthew notes that righteous Joseph was greatly troubled when he realized that his fiancée was pregnant. An angel of the Lord, however, assured him that the conception was from the Holy Spirit, in accordance with the prophecy of Isaiah. He was told that he had been appointed by God to be the Virgin’s guardian. 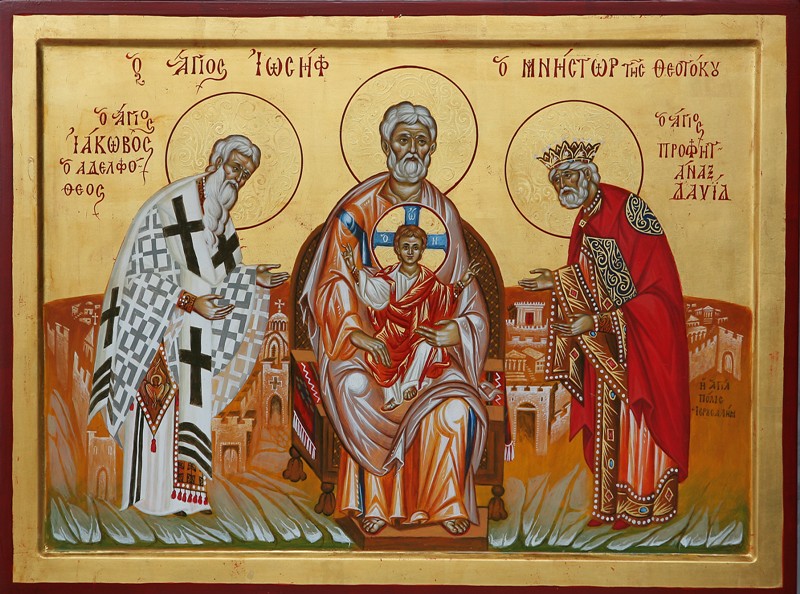 The phrase ‘did not know her’ means that Joseph did not have conjugal relations with Mary. But it is the next phrase that the heretics have based their position on, which is to try to show that Mary was, indeed, a virgin until the birth of Christ, but that thereafter she had other children by Joseph. The whole sentence is taken as ‘they did not have sexual relations until after she had given birth to her first-born son’. But this is a misunderstanding and a misinterpretation, because they have not understood the spirit in which Matthew recorded it and they have not taken into account the way Scripture usually expresses itself. From εως ου, the heretics conclude that until then Mary was without a man, but that after that she had conjugal relations with Joseph. And from ‘first-born’ they conclude that thereafter she had more children.

In his narrative of Christ’s nativity, Matthew wishes to stress the conception without seed from the Holy Spirit and the birth from the virgin. He wants to show that Jesus is God’s Messiah, the actual fulfilment of the prophecies of the Old Testament. He makes no effort to inform the reader of the life of the Virgin. In any case, it is likely that the Virgin was still alive when Matthew recorded his testimony. Certainly there would have been some people who had met her and knew about her life after the birth of Jesus Christ and were aware that she had not had any other children. In which case, there was no need for further explanation.

Eως ου does not contain any refutation of the permanence of Mary’s virginity, but means that, in the time which interests us, Mary was a virgin. It most certainly does not mean that thereafter the reverse was true. Such a conclusion is purely arbitrary. Besides, in Scripture, the word εως does not exclusively and always denote a time limit. It does not mean that, up to a certain time, something will happen and that afterwards it will not. It simply means that up to the point in which the author is interested, something happens, but what happens afterwards is not discussed, because the author is not concerned with it. [Just as, in English, if we say ‘I’ll keep this bread until Friday’ there is no indication as to what will happen to the bread after Friday WJL].

In making this observation, Basil the Great, John Chrysostom, John the Damascan, Zigavinos and other Fathers of the Church wish to show that this use of εως is common in Scripture. The fact that an over-simple interpretation of έως or έως ου by the temporal adverb ‘until’ might lead to a misinterpretation of the phrase was something that was of particular concern to Basil the Great, who expresses the fear that such an interpretation might lead to the conjecture that the Mother of God did not reject conjugal rights after the Lord was born from the Holy Spirit.

The way Nikiforos Theotokis interprets ‘and he knew her not until she gave birth to her first-born son’ is that Joseph never had conjugal relations with the holy Virgin, but that she was a virgin before birth, in birth and for ever. Theofylaktos of Bulgaria says that, wherever we find εως in Scripture it never has to do with what happens afterwards. So, it has the temporal value of indefinite duration.

Basil the Great is keen to provide an answer to misinterpretations of this passage (Matth. 1, 25), pointing out that εως does not indicate merely the notion of a limited time, but principally and mainly the concept of undefined time. He gives an example so that we can understand how to conceive of undetermined time. Saint Basil recalls that Christ says to His disciples: ‘Behold, I am with you all the days, until the completion of the age’. It would appear that ‘until the completion of the age’ has the meaning of a particular moment in time, but this does not reflect the truth, because even after this age ends Christ will still be with the saints continuously. So it has an unlimited temporal meaning, given that the completion of the ages does not stop with the end of life on earth, but continues in the heavenly and everlasting life.

So the attempt to show, on the basis of this passage in the Gospel according to Matthew, that Our Lady engaged in conjugal relations with Joseph is not sound. This is even more evident from the fact that the New Testament nowhere gives any information on the subject and never presents the Mother of God as being the mother of children other than Christ.

The decisive argument which resolves the problem is provided by the Fathers of the Church. They declare that Joseph, who is called ‘righteous’ by Saint Matthew the Evangelist would not have felt able to engage in marital relations with Our Lady the Mother of God after the miraculous conception of the child and the visions he had had relating to it. Naturally, this would have been even more true of the Mother of God. Instead, Joseph acted as protector of the boy and His mother. His relationship with her was full of respect for her person, since she had been chosen by God to bring Christ the Savior into the world in a miraculous manner. In no way was their relationship the complete and equal bond between a married couple.