Translation of the Relics of Saint Efraim the New

Saint Efraim, whose secular name was Konstantinos Morfis, was born in Trikala, on 14 September 1384 in an idyllic place near the River Lithaios. He lost his father at a young age and he and his seven siblings were brought up, with God’s help, by his mother. At the age of 14, in order to escape enforced conversion to Islam and enlistment in the corps of Janissaries, he entered the then flourishing Holy Monastery of the Annunciation of Our Most Holy Lady the Mother of God on the Mountain of the Spotless in Attica.

Saint Efraim followed Christ with fervent zeal and stood out for the luminosity of his life and his ascetic efforts in the monastery, in the neighborhood of Nea Makri. He was allowed to receive the great mystery of the priesthood and the grace of serving at the holy alter, like an angel of God, in fear of God and with great compunction. 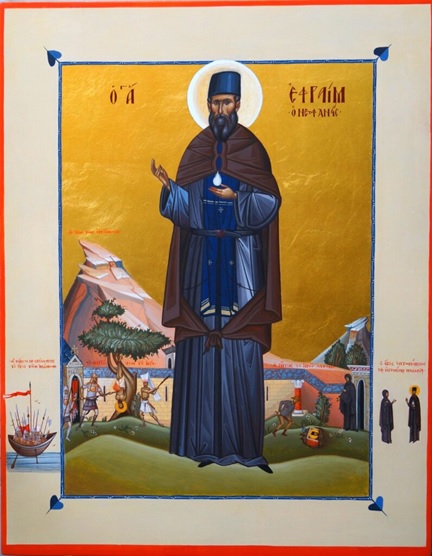 In 1416, the Turks invaded and looted Attica and forced the Duke of Athens to swear fealty to the Sultan. In 1424, the Turks forced an entry into the Monastery of the Annunciation of the Mother of God and slaughtered all the monks there. The saint was away, praying in his cave up on the mountain and when he returned he encountered the horror of the corpses of the monks. He buried them and lamented bitterly over them.

The next year, on September 14, the barbarians returned and found the saint. They arrested him and began his tortures, which ended on 5 May, 1426, a Tuesday, at 9 o’clock in the morning. They hanged him upside down from a tree, which is still there, drove nails into his head and feet and finally passed a lighted brand through his flayed and tortured body. He thus gave up his holy soul to Christ, Who awards the victory wreaths.

Five hundred years later, on January 3, 1950, God deemed it fitting that his holy and grace-filled relics be discovered, after Saint Efraim had appeared on a number of occasions and many other miraculous events had occurred.

We celebrate Saint Efraim twice a year: on 3 January, on the discovery of his holy relics and 5 May on his martyrdom.

In Trikala, the celebrations are held in the church of Saint Stephen opposite the site where, according to tradition, his family house stood.

In 2011, Saint Efraim was officially canonized by the Ecumenical Patriarchate of Constantinople.

Saint Efraim’s monastery, in Nea Makri, is one of the oldest monasteries in Greece. It was once full of monks and priests living the monastic life and praying to the Lord. During the years of the Turkish occupation of Greece, there was much vandalism and slaughter, with the result that the monastery was abandoned.

In 1945, a nun named Makaria went to the ruins of this ancient Monastery of the Annunciation, on the north-east foothills of Mount Pendelis. Inspired by God, she put together a little kelli there and began to clean up the ruins of the old church, in order to restore it. She often thought of the monks who had lived there over the centuries and prayed to get to know one, to have one appear to her. A voice, at first no more than a whisper, but which later became louder in her soul told her: ‘Dig and you’ll find what you desire’. And then, a particular spot in the courtyard of the monastery attracted her attention.

So, on 3 January, 1950, she hired a workman to dig at the place her soul indicated. Even though the workman was against it and said he’d rather dig anywhere else, in the end she won him over and he began to dig. There was half a fireplace, a wall and some things which indicated that it had once been a monk’s cell. The first thing to be found was a head. The whole place was filled with fragrance. 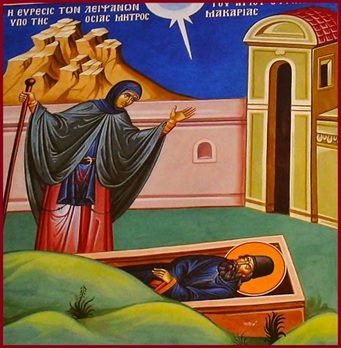 ‘I knelt in reverence and embraced the relics of the saint. I felt profoundly the extent of his martyrdom. My soul was filled with joy, I’d acquired a great treasure and, sieving through the soil, I saw the symmetry of his relics, which hadn’t been disturbed, despite so many centuries in the ground’, wrote Abbess- as she became- Makaria in her description of the amazing events.

Very carefully, Abbess Makaria lifted all the relics and placed them in a box next to the grave. It was clear that the man had been a priest because his habit hadn’t rotted.

In the afternoon, as she was reading Vespers, the Abbess heard footsteps. The noise came from the grave and sounded all the way to the door of the church. That’s when she saw him for the first time. He was tall, with round eyes, a long black beard, and he was dressed in the monastic habit. In one hand he held a flame and with the other he was blessing. He asked that he should be taken out of the box he was in. The very next day, the Abbess cleaned the bones and placed them in a box in the sanctuary of the church.

That same night, the saint appeared to her in a dream, thanked her and disclosed his name to her: Efraim. The relics of Saint Efraim are kept there still and every day hundreds of believers visit, seeking his blessing and his aid. By God’s grace, the saint has performed many miracles. Within the monastery walls, suitably protected, is the mulberry tree on which Saint Efraim breathed his last.