‘… and how from infancy you have known the sacred letters, which are able to make you wise for salvation through faith in Christ Jesus’.

One of the most beautiful phrases used by Saint Paul for the word of God is the ‘sacred letters’. The notion of the sacred is out-of-date in these times. It’s associated with the absolute, the metaphysical, with something that has the character of authority. It’s a person, an idea, a value, a way which cannot be questioned and demands absolute respect. The persons of religion are sacred. The symbols and rituals of religion are sacred. Sacred, too, are those who sacrifice their life and existence for the good of others. There is a measure of the sacred in religious and national feast days. We don’t exercise criticism of the sacred. We either accept it or reject it. This doesn’t mean that we can’t explain or reflect on these things. But to think that we have the right to remove their sacredness from them testifies to multi-faceted impiety and, at the same time ushers in the victory of egocentrism: that we don’t need God to give meaning to our life, and that our ego is god. 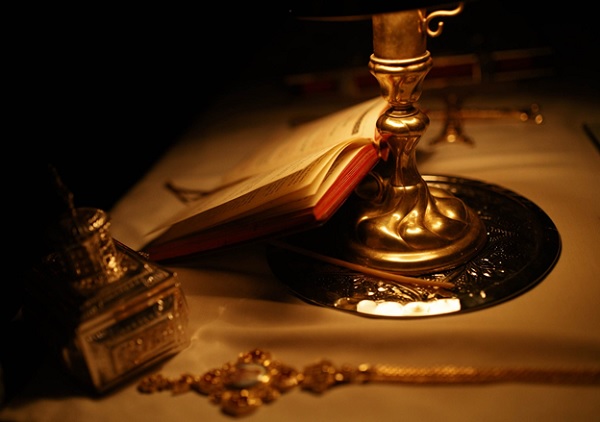 Clearly, what is sacred and what isn’t has changed over the centuries. Pagan temples were sacred, as were the pagan gods. When Christianity triumphed, people changed the God they believed in, they abandoned what had been sacred in the preceding religion, new churches were built and new saints recognized. But the temples, though abandoned, were not transformed into sites incompatible with their original purpose. We should remember that the Parthenon continued to be a temple, but the God who was worshipped there changed. Items from the ruins of pagan temples were often incorporated into new Christian churches. No Christian would have deemed it healthy to transform a pagan temple into a shop, a place of entertainment or a dwelling-place. Even though they considered the gods which had been worshipped there to have been false, this did not alter their respect for the locus itself. This is how so many antiquities have survived throughout Europe: because faith was always respected. Even when misdeeds occurred, they were not committed with the blessing of the Church, nor were they accepted as its teaching and mode of behavior.

Our own day and age has somewhat set aside religious and institutional sacredness. The atheist regimes of the iron curtain countries pulled down churches and made them into places of entertainment, warehouses and such in an effort to liberate their citizens from ‘the opium of the people’. Now, in Europe today, churches are being sold off because Christian Churches and confessions are unable to maintain them, because of a shortage of believers. These former places of worship have been turned into places of entertainment, cinemas and hotels. Besides this, every kind of atheist community has been pursuing a new sacredness: ‘political correctness’, where respect for the freedom, self-determination and lack of faith of others has led to a restriction of the right to expression for the many.

Because some people don’t believe, Christians must restrict public expressions of their faith such as feasts, decorations and the worship of God. People of all religions and none now live together and society has become multi-cultural, so we must now perforce engage in self-censorship as regards what is publicly sacred in order not to offend. Since some people make different choices as regards their sexual orientation, clothing, habits and view of life, no criticism is permitted because this would insult them and raise suspicions of ‘racism’.

For the Church, however, the concept of the sacred remains as it has always been. What Saint Paul says is indicative of this. What is sacred makes us wise. In other words, it gives us the chance to know what’s of significance, what gives meaning to life both here in the present and in eternity. It provides us with the opportunity to have a compass in our relations with others, pointing to the truth of Christ and the Gospel, and therefore a rudder in our daily life and in any crises that arise. It allows us to organize communally on the basis of love, to regard others not in terms of our own interests but as companions. We can persevere, be patient, cooperate, strive for a more just world which will not lose its meaning in nihilism but will always see everything in the light of the resurrection and of eternity. This is what our salvation entails. It’s the acquisition in Christ of the meaning that makes our life safe, sound and full, since it is love alone which makes us see the world and ourselves authentically.

We oppose the tyranny of political correctness with the beauty of the sacred. We don’t offend others by following Him Who gives us both our identity and the Church, which helps us to find in others not enemies, not competitors, not props for our ego, but opportunities to assist, to sacrifice and to love. We don’t need the law of political correctness. Not because we feel the need to demonstrate some ‘superiority’ by demeaning others, but because our identity is given to dialogue. Discretion, love and openness make our differences not a cause for hatred of others but an opportunity to reflect on them. And our relationship with Christ provides the hope which surpasses the limits of time and culture.

As we start the Triodio, a time of introspection, repentance and openness to others and to the world, let us take up again the sacred letters. Holy Scripture, the homilies of our Fathers. Let us experience again the communion of the Church, with the beauty of its symbols and feasts, as an opportunity to turn our attention to our common weal, to love and to eternity. And let us not fear being isolated by this choice. The truth consoles and redeems.