Saint Haralambos, a Model of Humility

As of today, we enter the period of the Triodio, a time of more intense prayer, during which the Church, through its Scriptural readings and devout hymns strengthens us for our spiritual struggles and for the acquisition of the virtues of humility, obedience, love and true faith. All of these virtues adorned Saint Haralambis, whose memory we celebrate today.

Saint Haralambis (or Haralambos) was born in Magnesia, Asia Minor (near Ephesus) in 89 A.D., while the Holy Apostle and Evangelist John was still living there. At that blessed time of the Apostolic Fathers, the successors of the Holy Apostles, Saint Haralambos lived, for 113 years, until 202. He was found worthy of the rank of the priesthood. With the sanctity of his life and his apostolic zeal, the saint, as a priest, brought many pagans to Christ in his homeland of Magnesia. This became known to the pagan governor of the region and, in the course of the persecution unleashed by Emperor Septimius Severus in the year 202, he was arrested. 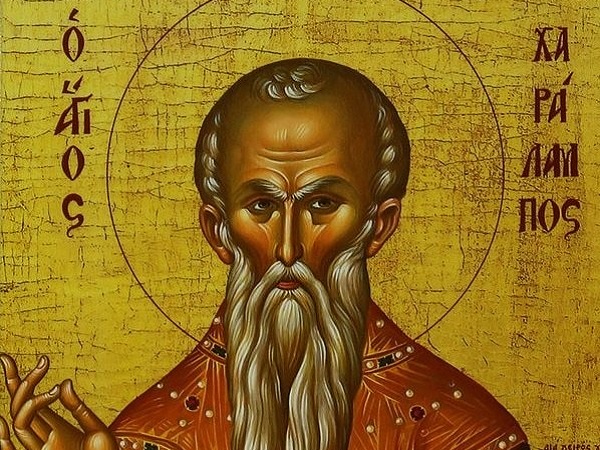 Despite his extreme old age, he suffered dreadful tortures aimed at forcing him to renounce his faith in Christ. He faced them all with faith, trust in God, patience, forgiveness towards his tormentors and with humility. While he was being tortured, miraculous events occurred: the blind regained their sight, the lame walked, the possessed were cleansed of their evils spirits and those suffering from incurable diseases were healed. Then, some of the people who had observed these miracles performed by the saint were astonished and asked him: ‘Are you the Christ?’ He replied simply, ‘I’m a servant of the Lord Christ and these miracles are performed by His grace’. When Severus was told about the saint and that he was performing miracles every day, he said to him: ‘From what I’ve heard you can even raise the dead’. The saint was not at all troubled by any thoughts of pride on hearing these flattering words from the emperor and answered immediately: ‘No human person can do that. Only the Lord Christ’.

A humble outlook; that’s the basis of sanctity. I should feel that I, too, am a servant of God. I can do nothing by myself. If I do anything good, it comes from God and to Him is due the praise for it. ‘Not to us, Lord, not to us but to your name give glory’ (Ps. 113 [114], 9), as the psalmist says. This humble outlook characterized Christ’s apostles. Let’s recall the reaction of the apostles Paul and Barnabas in Lystra, when, after the miraculous cure of a man lame from birth, the people around wished to worship them as gods: ‘they tore their clothes and rushed out into the crowd, shouting: “Friends, why are you doing this? We too are only human, like you. We are bringing you good news, telling you to turn… to the living God’” (Acts 14, 14-15).

It would be irrational of me to ask God to help me in my time of need and then, when he gives me what I’ve asked for, to represent it to myself and other people as my own doing. That’s ingratitude to God. It’s misappropriation of God’s power and glory. And, unfortunately, it’s very likely to happen after some great success. We forget God’s assistance and attribute the success exclusively to our own efforts. To one such proud person, Saint Paul poses the question: ‘What do you have that you did not receive? And if you did receive it, why do you boast as though you did not?’ 1 Cor. 4, 7).

Such egotistical behavior is an insult to God and has destructive consequences for the people who exhibit it. We see it in the case of Herod. In the Acts of the Apostles, we read (12, 21-23) that, dressed in his fine royal clothing, he spoke to the people with such excellence that they were all impressed and praised him: ‘God’s talking, not a human being’. And what happened. Because he consented to being glorified as a god and didn’t give the praise to God, he was filled with worms and died. So when we feel pride  because of the praise of other people, or self-satisfaction for our successes, let’s recall the fate of worm-eaten Herod and give God the glory rather than seeking praise for ourselves.

None of this means, of course, that Christians shouldn’t feel satisfaction and joy over something they’ve achieved in life though their best efforts. A student will be happy at passing an exam, a scientist at some breakthrough, an entrepreneur at the growth of a business. They’ll be happy, but they won’t neglect to thank God for making them capable of attaining this satisfactory outcome. For Christians, the motive for their achievements isn’t to satisfy their self-regard, but to make spiritual progress and to give glory to God. This is precisely what Saint Paul means when he says that whatever it is that we do, we should do it to the glory of God.

My friends, may we all realize that egotism and pride bring us into conflict with God and other people, as we saw in the parable of the Publican and the Pharisee yesterday. It’s very much to our advantage for us to live in humility. Our example is Saint Haralambos. This is how we can ensure the peace of our soul, our harmonious co-existence with others and the riches of the Grace of God in our life since ‘God opposes the proud and gives grace to the humble’ (Jas. 4, 6).