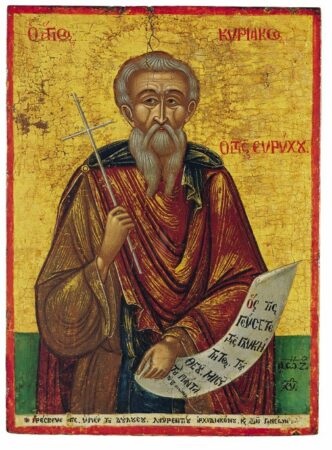 In Larnaka, the son of a teacher had cancer of the brain. One night he had a dream about a venerable elder who said to him: ‘What’s up son? Why are you suffering and in pain?’

The elderly man then said to him: ‘Come to my house and I’ll cure you’

‘Where do you live?’

The saint said: ‘My house is in Evrykhou and my name’s Kyriakos’.

When he woke, the boy told his father and they set off together for Evrykhou.

When they got there, they asked if there was a Saint Kyriakos and, when they found out that his church was a little way outside the village, to the north, they took the village priest with them and went there. After they’d venerated the saint’s grave and icon, the boy was cured.

So they thanked the saint, praised God and returned to Larnaka with great joy.