Do your duty, help others and be useful 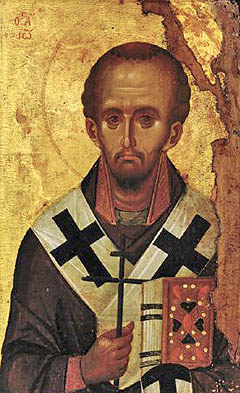 There’s nothing worse than Christians who don’t save other people. Don’t cry poverty, because you’ll be condemned by the widow who put in her two mites. Don’t claim that you come from a humble background, because the Apostles were insignificant and then became important. Don’t go on about your illiteracy, because they were also illiterate.

Even if you’re a slave, if you’re a fugitive, you can do your duty, because Onisimos was one such. Yet, look at how Saint Paul calls him and advances him to high office ‘so that he might serve me in these chains’. And don’t claim that you’re ill, because Timothy also suffered from ‘frequent illnesses’.

Don’t you see the barren trees, how strong and lovely they are, large, smooth and tall?  But if we have an orchard, we’d rather have productive pomegranates and olives than them, because they’re only for enjoyment and don’t bring us the slightest benefit. That’s the way those Christians are who care only about their own affairs. In fact, they’re not even like that, because they’re headed for the fire, whereas as decorative trees are at least used, either for construction or for the security of the owners.

Five of the virgins were like this: pure, of course, decorous and prudent, but of no use to anyone, which is why they were consumed by fire. That’s the way people are who don’t feed Christ. Notice that none of these are charged with their personal sins. They aren’t condemned for fornication or perjury. Not at all. But because they weren’t useful to others. How are people like that Christians? Tell me, if the leaven that’s added to the flour doesn’t make the whole dough rise, is it really leaven? And, is myrrh which doesn’t fill the air with fragrance for those who approach it something that we’d really call myrrh?

Don’t tell me it’s impossible to move other people. If you really are a Christian that’s impossible.  Just as what we see in nature is incontrovertible, so is this, because it’s in the nature of a Christian to be like this. Don’t curse God. If you say that the sun can’t shine on you, you’re cursing it. And if you say that a Christian can’t benefit others, you’re cursing God and calling Him a liar.  Because it’s easier for the sun not to heat, not to give light, than it is for a Christian not to illumine others. It’s easier for light to become darkness than for that to happen. So don’t say it’s impossible, because what’s impossible is the opposite. Don’t rail against God.

If we organize our lives properly, these things will certainly happen and they’ll follow naturally. A Christian’s light can’t be hidden; such as bright lamp can’t be concealed. So, let’s not neglect this.