Forgiveness – Do We Know What We’re Doing?

The first service of Great Lent in the Orthodox Church is “Forgiveness Vespers,” served on the eve of Monday of the First Week. There is nothing unusual about the service itself – other than the “rite of forgiveness” appended to it. In this, the priest and the faithful ask forgiveness of one another. Often this is done with mutual prostrations. Each asks the forgiveness of the other. The rite can take time, depending on the number in attendance. When it is complete, the long labors of Lent can begin. Fasting without forgiveness would be a hollow activity. This is a meditation I shared with my parish this week as the Sunday of Forgiveness approaches:

Perhaps the most generous words spoken by Christ are those we hear from the Cross: “Father, forgive them, for they do not know what they are doing.” Taken at face value, the words make little sense. Surely, those who crucified Christ knew that they were killing a man. Surely they were even aware that his execution was largely political and unjust. The centurion in charge of the crucifixion is said to have stated, “Surely this man was the Son of God.” So how could Christ say, “They do not know what they are doing?” 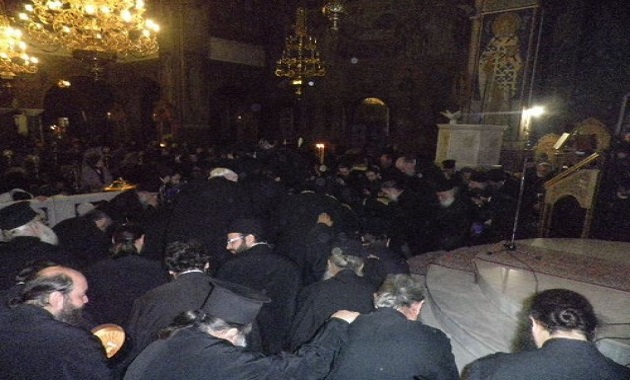 I believe this goes to the very heart of our lives and actions. We almost never know what we are doing. The greater context, the meaning of anything, is  hidden from us. We have children, work at a job, and live our lives, hoping that these have been worthwhile actions. We know that much, even most of what we have done has been tainted with bad intentions and other less-than-worthy motivations. But we never actually grasp the full scope of our actions. Even those good things that we do have a hidden aspect. Did that kind word spoken earlier make a difference? Did that act of charity actually change anything?

This hidden aspect of our lives is an inherent part of the human condition. We simply don’t know what we’re doing. This makes it very hard for us to judge our actions or to weigh them for their value.

Christ’s words are addressed to the Father on behalf of all of humanity. For it is not just the small number of people in Jerusalem who were consenting to His death. His death is “on behalf of all and for all.”

And this brings us to Forgiveness Sunday. “Why do I need to ask forgiveness of others if I have done them no wrong?”

The simple answer is: You don’t know what you have or have not done. But it is commonly understood in Orthodoxy that “each person is responsible for the sins of the whole world.” Our lives are deeply connected—we are never uninvolved in the lives of others. What I have done and what I have not done both effect the lives of the whole world. A child dies on the other side of the world. I may have had no direct hand in the death, and yet I cannot excuse myself as if I have no share in what happens everywhere. The world is as wemake it.

I once heard a monk say, “The person of prayer does not need to go any further than his own heart to find the source of all violence in the world.”

“Forgive me,” we say. “God forgives us all,” comes the response. It sometimes feels awkward, even embarrassing. Some people begin to weep. Others begin to giggle. Both are part of the human condition within our shame.

But the actions of Forgiveness Sunday unite us necessarily to the actions of Christ. By submitting Himself to crucifixion, Christ put Himself in the place of the sinner, the one needing forgiveness. He was displayed naked, nailed on high for all the world to see (“on His shoulders He bore our shame,” Isaiah prophesied).

In the mild social embarrassment of saying, “Forgive me,” to another human being, we unite ourselves to the deep, profound healing shame of Christ. And with brazen boldness we confess, “God forgives us all!” uniting ourselves with the priestly cry of Christ Himself, “Father, forgive them!”

And having read this, and done all that, we still will not know what we have done. But we are not saved by knowing what we do. We are saved by doing what He does.