Homily on the 1st Sunday in Lent (Part 1)

On the first Sunday of Great Lent, our Holy Church celebrates the triumph of Orthodoxy, the right belief, which trampled down all the heresies and has since become established for ever. This is why this Sunday is known as the Sunday of Orthodoxy. Heresies made their appearance from the very beginning of Christianity. Christ’s Apostles themselves warned their contemporaries- and us with them- about the dangers from false teachers. 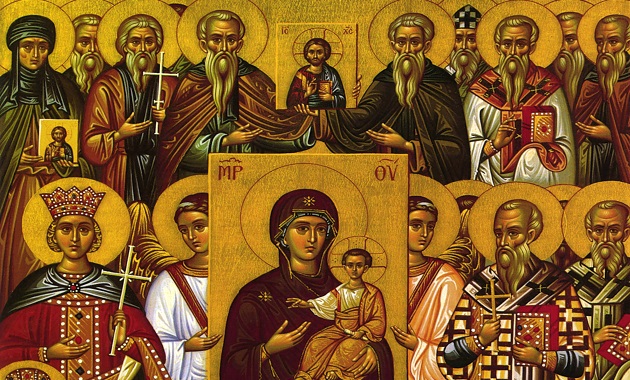 The Holy Apostle Peter, in his 2nd universal epistle writes the following: “But false prophets also arose among the people, just as there will be false teachers among you, who will secretly bring in destructive heresies, even denying the Master who bought them, bringing upon themselves swift destruction. And many will follow their pernicious ways, and because of them the way of truth will be blasphemed” (2 Peter, 1-2).

When Saint Paul returned to Palestine from Greece, he stopped over in Ephesus. There, he said to the Christian inhabitants of the city: “I know that after my departure fierce wolves will come in among you, not sparing the flock; and from among your own selves men will arise speaking twisted things, to draw away the disciples after them” (Acts 20, 29-30).

There were many such false teachers in the first centuries of Christianity. Some heresies disturbed the Church for several centuries, such as, for example, those of Arius, Makedonios, Eftyhis (Eutyches), Dioskoros, and Nestorios, as well as that of Iconoclasm. These heresies were the cause of great turmoil within the Church and caused it enormous distress. There were many martyrs and confessors who shed their blood in defence of the true faith in the struggle against false teachers and heresies.

There were also many great hierarchs who also suffered persecution and were often exiled. Saint Flavian, Patriarch of Constantinople, for example, at a synod under the chairmanship of Dioskoros (the “robber synod”) was so badly beaten that he died three days later.

The last in the series of heresies, that of the iconoclasts, was the one which brought the most serious troubles to the Orthodox Church. This heresy arose for the first time in the reign of Leo the Isaurian, who ascended the throne in 717. He did so with the assistance of the army, which contained many opponents of the reverence shown to the holy images (icons). Since he wanted to please the army, he launched a harsh persecution against supporters of icons. This persecution continued during the reign of Emperor Konstantinos Kopronymos, who succeeded to the throne after Leo. His name means the Excretor, because at his baptism he fouled the water in the font. For many years, these two emperors held power and brought great misery upon the Church. After them came other iconoclast emperors who continued the work of their predecessors and tormented the Church for years.

We can’t describe the trials  that the Church suffered during the iconoclast schism, especially the monastics, who were in the front line of the battle in support of the holy images. The iconoclast emperors closed many monasteries and many churches where there were icons and turned them into warehouses. They treated the monks very harshly: they put out their eyes, cut off their noses, and broke icons over their heads. With red-hot iron, they burned the fingers of iconographers.

It was only when the Empress Irene came to the throne that the persecution ceased, though not for good. In 787, Irene summoned the 7th Ecumenical Synod, which formulated Orthodox teaching concerning the honourable reverence to be paid to the holy icons. But even after this synod, there were emperors who were iconoclasts, such as, for example, Mihaïl and others. This heresy was finally crushed only in the reign of the God-fearing Empress Theodora, when a local synod was called in 842, in Constantinople, which confirmed the Orthodox teaching. This synod anathematized all those who dared to say that reverencing the holy icons is tantamount to idolatry and that the Orthodox Christians are pagans.