Homily on the 1st Sunday in Lent (Part 2)

And today, the heretics are telling us precisely the same thing. They have the nerve to call our icons idols and us idolaters. They have cheek for anything. Let me tell you about an incident that happened recently in a town in Siberia. During the liturgy, two Baptists walked into the church and started shouting that the Orthodox are idolaters and the icons idols. What nonsense!

How dare they open their unclean mouths and utters such words, that drip poison, calling us idolaters and the icons idols? This demonstrates that they haven’t properly understood the second commandment of the Mosaic Law: “You shall not make for yourself an idol, or any likeness of anything that is in heaven above, or that is in the earth beneath, or that is in the water under the earth. You shall not bow down to them or worship them” (Ex. 20, 4). 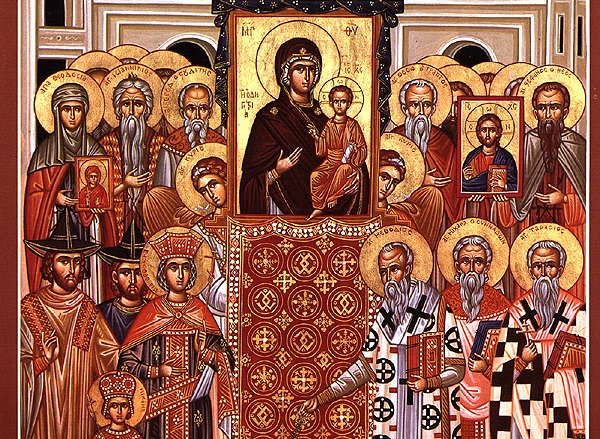 What does this commandment mean? It seems to me that the meaning is clear. It forbids us to make idols and to bow down to them instead of worshipping the One, Only and True God. Ancient peoples had done just that: the Assyrians, the Babylonians, the Egyptians, the Greeks, the Romans and others. That’s idolatry. But our reverence for the holy icons isn’t anything like that. Absolutely not. The idols represented something that didn’t exist in reality, something that’s the fruit of the imagination. But our icons depict reality. Did our Lord Jesus Christ, Whom we glorify and Whose icons we reverence, not live among us? Didn’t the Mother of God, whom the holy Apostle and Evangelist Luke portrayed? This icon was blessed by the Mother of God herself, saying that her grace would always be with it. Do you know how many miracles are wrought through icons of the Mother of God?

Don’t the other icons depict real faces of the saints who lived here on earth? These icons are portraits and not in any way graven images. Only impure and impious lips would dare to say that our icons are idols and we are idolaters. The impious should hold their tongues, because an Ecumenical Synod directed an anathema against them.

You should know this, remember it and have nothing to do with heretics. Don’t depart from the Church; don’t rend the garment of Christ. Remember that Christ, in the High Priestly Prayer, interceded with His Father saying: “that they may all be one, just as you, Father, are in me, and I in you, that they also may be in us, so that the world may believe that you have sent me” (Jn. 17, 21). The Lord wants the unity of the Church. Schismatics, who find errors in the teaching of the Church move away from it and believe that they’ll find their salvation in heretical organizations.

But do you know what the great saints said about people who rend the garment of Christ? Saint Cyprian, the Bishop of Carthage, said that people who depart from the Church are not in communion with it; even if they’re martyrs they still don’t wash away their sins with their blood, because the grave sin of splitting the Church cannot be expunged, even with blood. And the holy hieromartyr Ignatius the God-bearer said that those who provoke a schism in the Church will not inherit the Kingdom of God.

But all heretics proclaim schism. Paul says, however: “I appeal to you, brothers, to watch out for those who cause divisions and create obstacles contrary to the doctrine that you have been taught; avoid them” (Rom. 16, 17). And in another epistle he says: “If anyone is preaching to you a gospel contrary to the one you received, let him be accursed”. (Gal. 1, 9). And all heretics declare something other than the teachings of the Orthodox Church which gave birth to us spiritually.

Remember also the words of the Lord Jesus Christ, Who said to His disciples and, through them, to their successors: “Those who listen to you, listen to me, and those who reject, you reject me, and those who reject me, reject him who sent me” (Lk. 10, 16). These are dread words from Christ. Remember them at all times. Never forget, either, this day, the day of the triumph of the Orthodox faith. This faith was formulated once and for all at the 7th Ecumenical Synod, which confirmed Orthodoxy and trampled down all heresies and schisms.

More than a thousand years have passed since the 7th Ecumenical Synod and there have been no more since. Why not? The reasons are political. There was no possibility of convening one. But let’s not fret that there haven’t been others and that they don’t happen today. The seven we have answered every question and resolved all the problems faced by the Church from heresies and confirmed the Orthodox faith.

Precisely for this reason, it’s been appointed that today we sing a doxology as thanksgiving to God for the confirmation of Orthodoxy. And we shall sing this doxology now.